Fighting is on-going between Moroccan military forces and the Polisario Front (Popular Front for the Liberation of Saguia el-Hamra and Río de Oro).

On November 16th and 17th, clashes are continuing along the security wall in the disputed area.

King Mohammed VI said the military operation by Morocco’s army had enabled trade to resume through the strategic border post at El Guergarat that had been blockaded by supporters of the pro-independence Polisario Front.

Morocco “has redressed the situation, settled the problem definitively and restored the flow of trade,” the monarch told United Nations Secretary General Antonio Guterres, according to a royal statement, issued on November 16th.

While authorities would continue to support UN efforts to reach “a realistic and achievable solution” for the conflict, those efforts must ensure the territory stays under Moroccan sovereignty, the king said.

The hostilities began after Rabat sent troops to reopen a highway linking Morocco, the Western Sahara and Mauritania that was occupied by protesters.

Polisario, in response, vowed to intensify its attack, and it claims that Morocco defaulted on the three-decade-old agreement and is backed by neighboring Algeria.

“There is just no feasible way to prevent a full return to war,” the group’s envoy to Europe, Oubi Bouchraya Bachir, said. “The cease-fire is over once and for all.”

For the past three weeks leading up to November 13th, dozens of Sahrawi protesters had blocked the Guerguerat border crossing, cutting trade and traffic between Morocco and Mauritania to the south.

They were demanding Morocco close a road in the U.N.-patrolled buffer zone and calling for the release of political prisoners.

Rabat’s reaction was that it deployed a brigade of 1,000 men accompanied by 200 vehicles to the region, violating the terms of the ceasefire.

In response, Polisario said that it would stop adhering to the ceasefire and declared war on Morocco.

Sidi Omar, the Polisario Front’s representative to the U.N., said of Rabat’s action:

“For us, it is an open war.” The Sahara Press Service claimed Polisario had launched attacks for five consecutive days against the Royal Moroccan Army in the Western Sahara, “causing loss of lives and equipment and disrupting its military plans.”

In an official statement, King Mohammed VI warned that Morocco “remains firmly determined to react, with the greatest severity, and in self-defence, against any threat to its security.”

International organizations, as well as separate states are urging for hostilities to end.

The secretary-general of the United Nations, António Guterres, and the chairperson of the African Union Commission, Moussa Faki, expressed their grave concern over the conflict, with Faki stating:

“The Saharan issue has gone on for a long time and it has become urgent to solve it as a case of decolonization in the first place, and to support the UN efforts in this regard.”

The High Representative of the Union for Foreign Affairs and Security Policy, Josep Borrell, stated that the EU was supporting the efforts of the United Nations to find a peaceful settlement for the conflict, in accordance with the Security Council resolutions, and stressing on the insurance of freedom of movement in Guerguerat.

Egypt, Mauritania, Russia, and Spain have all urged both parties to respect the ceasefire.

South Africa and Algeria, which back the Polisario Front, accused Morocco of violating the ceasefire and urged the UN to appoint a new Western Sahara envoy to restart talks.

Algeria also sent 60 tons of food and medical aid to the refugees in Western Sahara. In addition, Spain’s second deputy prime minister Pablo Iglesias Turrión, and Venezuela have stated that they supported the right to self-determination of the Sahrawis.

its called western sahara nobody actually lived there through history except few bedouins, this land was originally under moroccan sobirany but Spain and France invaded the whole country and nowadays it’s according to the UN, still under spanish administration. Algeria took much of the Saharah from Tunisia and Algeria and Algeria is trying to wrestle control of Western Sahara away from Morocco through creating political problems and funding the Poilisario. I also have friends from Western Sahara who agree with this and say it was always part of morocco and they are happy with this. It seems many of you have been swayed by the political influence of an oil rich nation who wants to check morocco’s future stability and prosperity……………again yes morocoo is a western puppet but it doesn’t mean the other side is the good side !!!!!!!!!!!

Morocco is a corrupt family run criminal enterprise in servitude to the Zionists and the west in general.

i just said that what’s your point ? morocco is bad doesn’t mean the other side is rightfull and good stop being breinwashed

yeah protesting using fire arms and blocking an international border is peacefull ………….and they say morocco who started it and brake the ceasefire what kind of hypocrisy is this …they get what they deserve, the polizario don’t represent the real sahraoui people they’re a bunch of gangsters and campers used by algeria and spain …the sahara was under moroccon influence before the colonisation as matter of fact half of algeria and mauritania were under moroccan sphere of influence, algerian regime wich is also a western puppet is just salty they want to bully their way to have a corridor to the pacific …..as arabs we’re so dumb and retarded all our border problems could be resolved if we were united we have the same history same language same religion and yet we’re in conflict because of dumb colonial borders

Greetings. Thank you for your point of view. We will be glad to publish your vision of the situation on southfront.org if you assemble it into a fact-based article written in an analytical manner. Please, feel free to contact us via info@southfront.org
Best regards,
SF Team

Frankly, it is standard Moroccan propaganda to discredit the Sahrawi people. The facts are the opposite.

an ignorant man who never put foot in africa speak about facts….you can cry and rage all you want that sahara will always be under moroccos control weither you like it or not it belonged to morocco before the colonisation and will be after ….the algerian corrupt regime want do sh*t ………..you never knew or spoke to a sahraoui man in your life and speak about things you don’t know about stop being ignorant the majority of moroccan sahraouis are happy and don’t want a bunch of mercenaries ruling them backed by the corrupt algerian regime

Frankly speaking, firstly, correct your ignorance. It is called POLISARIO and the term is Sahrawi people. Morocco is a corrupt stooge of Zionism and lives off EU charity. Suicide rate among the unemployed Moroccan youth is highest in the world and the occupation of Western Sahara is to plunder its natural resources. Algeria is the only country that has steadfastly stood up to Moroccan criminal regime..

you dumb fuck never ever even visited the sahara and speak about stuff you don’t know about just because moroco is western puppet doesn’t mean the sahara belongs to a bunch of proxys and terrorists that don’t even have popular backing ….go to layuun and speak to sahraoui people and see what they think the majority of them consider themsekves moroccans ….you guys think see things as black and white morocco western puppet = morocco bad and polizario good wich doesn’t make any sence …. algeria is also a western puppet stop believing their propaganda they are even more corrupt than the moroccan regime …it’s not always black and white

Southfront team can you please indicate on the map where the phosphate mines are. Thanks keep up the great work

95% of morocco’s phosphate is north of the sahara border…. i don’t know why people keep talking about phosphate in this conflict it has nothing to do with it . 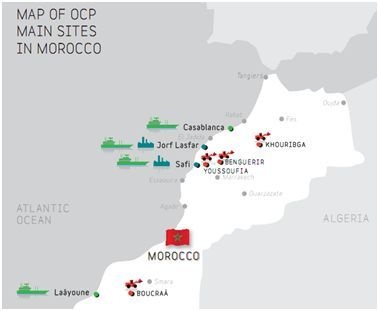 Thank you for the feedback.
Best regards,
SF Team

There is more than phosphates in western Sahara. It has large deposits of phosphates, zinc, manganese and iron ore that conservatively are valued at $2 trillion. That is one of the primary reasons that the Jews and France in particular are backing the murderous Moroccan occupation of western Sahara that has displaced a million Sahrawi refugees.

hahahah lol what type of map is this it doesn’t show anything ?? WERE ARE THE MINES THEN ??? the majority of moroccos phosphate is not even in the sahara they talk about petrolium too but there is nothing there …..STOP LYING WITHOUT PROVIDING FACTS !

The Moroccan theft of western Sahrawi natural resources is on a global scale. It provides over 60% of Moroccan bankrupt state’s income.

hahaha what kind of map is this ??? were are all the mines you’re talking about ??? 60% PERCENT MY ASS

lol have you ever visited the sahara in your life have you spoken directly with the population from there ?? what reporting are you talinkg about