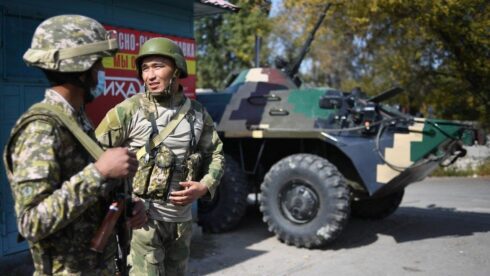 In the afternoon of December 27, shooting broke out between Tajik and Kyrgyz servicemen in the areas of Tort-Kocho and Chyr-Dobo. The incident escalated into full-fledged clashes with the use of mortars and grenade launchers.

The number of victims reached 24 people. At least 11 Tajik citizens have been injured so far, including 3 civilians and 8 military personnel. The rest of the victims are Kyrgyz military and civilians. According to the latest data, at least 2 people were killed. A shell hit the house of a resident of the village of Somonien. It remains unclear who was behind the strike as the sides accuse each other of launching the shell. The second victim was an ambulance driver, who was killed when the car came under crossfire.

According to the border service of Kyrgyzstan, the conflict began when the Tajiks blocked the Batken-Isfana highway and opened fire on the Kyrgyz military. On the other hand, Tajikistan claimed that the clashes broke out when a group of 50 Kyrgyz citizens forcibly stopped the car of a Tajik citizen when he was traveling from one Tajik village to another. Tajikistan assessed the situation as aggression by the Kyrgyz soldiers.

According to the State Security Committee of the Tajik Republic, a group of Kyrgyz citizens forcibly stopped the car of a Tajik citizen.

Following the conflict between the local residents, clashes escalated into a shootout between border guards.

“The Kyrgyz side did not arrive at the meeting. Instead, the border guards of the Kyrgyz Republic, who occupied firing positions along the perimeter of the bridge, opened fire on civilians,” the report says.

For its part, the National Security Committee of Kyrgyzstan reported that the reason for the conflict was the blocking of the section of the Batken- Isfana highway.

Bishkek claims that the Tajik side opened fire. Including mortars.

On the night of December 28, Bishkek and Dushanbe agreed on a ceasefire under the CSTO diplomatic mediation. Amid the political efforts, both sides are deploying heavy military equipment and personnel to the border areas.

At the end of April 2021, another shootout on the border of Tajikistan and Kyrgyzstan claimed the lives of about 20 people on both sides. Approximately 150 people were injured. Small arms and artillery were used during the conflict.

More than 900 km of the border between the two countries remain undelimited. A significant part of the infrastructure in the disputed region, including the large Tajik enclave of Vorukh, was built in Soviet times. After the collapse of the USSR, due to the lack of the official boundary, conflicts are breaking out on a regular basis over the access to water resources and pastures, as well as to the roads between the local enclaves. In warm seasons, contradictions escalate amid the increased water consumption for agricultural work.

The recent developments on the Tajik-Kyrgyz border are alarming. In general, Central Asia faces a high risk of escalation of armed conflicts, both between states and within countries. The main causes of destabilization are low incomes of the population, unemployment, as well as the spread of radical ideology and the infiltration of extremist groups from Afghanistan.

Hey, if Dushanbe is looking for land, I’m sure the folks in Badakhshan & Panjshir Provinces would prefer to be annexed by Tajikistan over remaining under the Taliban.

When I wrote that Pashtun Taliban are not different than ISIS, the pro-Russian Southfront community didn’t want to listen. Now bear the consequences of your negligence towards Afghan people, having left them to wolves dressed as sheep.

Blaming russia is a pathetic argument.

This is Russia’s role in Afghanistan: “They (NRF and allied groups) should look for ways to facilitate mutual understanding and national reconciliation, to restore a sustainable peace, stability and security in Afghanistan and around it”, Russian Foreign Ministry spokesperson Maria Zakharova said last month. https://sputniknews.com/20211230/afghanistans-resistance-movement-calls-for-global-support-as-it-ramps-up-attacks-against-taliban-1091913008.html