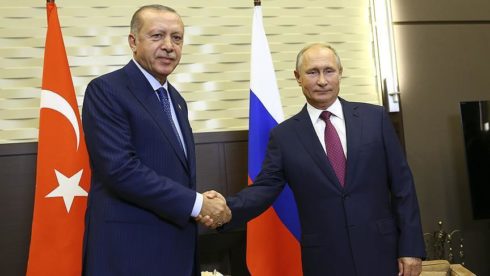 On September 17, sporadic clashes continued between the Syrian Arab Army (SAA) and members of various militant groups led by Hayat Tahrir al-Sham (formerly Jabhat al-Nusra, the Syrian branch of al-Qaeda) in the southern part of Idlib province and the northwestern part of Hama province.

According to pro-government source, SAA units engaged militants in the villages of Tal Othman and al-Zaka. Artillery duels were also reported at other points in the afrorementioned areas.

“I believe that not only of our region, but also the eyes of the whole world are now on Sochi,” the Turkish president said, adding that the results of the Sochi talks will bring new hope to the region.

Results of the talks between Russian and Turkish top leadership will directly impact the situation in Syria and a possible peaceful settlement on the conflict. Currently, the sides have some obvious contradictions on the situation in Idlib, where Hayat Tahrir al-Sham and its allies control a major part of the area. The Syrian-Iranian-Russian alliance aims to eliminate the terrorists. However, Turkey insists that the area is mostly controlled by the “opposition” and opposes any kind of military operation there.

Why doesn’t Turkey take the vermin back into Turkey and fight the Kurds there ?.

They’ve lost their control against HTS. They’re hoping that NFL would be more popular to gather their number against HTS.

Unless there is a total surrender by the militants in Idlib, Russia/Syria should not stop the offensive. A few long range missiles on the Turkish tanks should have them scurrying back home. Don’t give up the momentum now!

Syrian army slowly slowly taking their lands back from US and UK encroachers and terrorists.

Breaking News: US and British Forces Trapped in Idlib Syria

Already they have killed one million Syrians. Therefore, SAA and allies should kill them all. If Trump and Nikki and Benjanyahu is there in Idlib, so kill them too. No excuse for terrorists whether that is a fighter or a president of US.

Pu.tin play danger game at the Syria expense. Nice idea, but will not work with guy like ERDOGAN. ERDOGAN is playing on two fronts and using to his or Turkey advantage. Idlib belongs to Turkey now and ERDOGAN will use NATO to defend and Putin is to weak to stand up for Syria. Sooner or later ERDOGAN will go with NATO and annexed Idlib. Russia will not able depend on Turkey, unless Russia agree annexed Idlib to Turkey or Turkey control of Idlib. Putin was hoping Turkey will leave NATO, but did not happen and will not happen. The only good thing Russia could do for Syria, give Syria 5 or 6 units of S-400, many VERBA MANPAD, more Pantsir and modern Airplanes such as SU-29 and SU-30 and modern attack helicopter

A peaceful solution to Idlib is possible. The terrorists should return the way the arrived, through Turkey. Erdogan could greet them with a smile and a thank you for their efforts at planting the Wahabi flag across Syria.

The Syrian government coalition has started moving the front lines forward in Idlib. This is a good thing. Whether the regime change terrorists die, reconcile with the government, or relocate to Afrin or SDF held areas will be determined in the weeks ahead as clearing and negotiations continue. But the air war is clearly being added to with a ground war as well.

Hopefully the Presidents also talked about forming and participating in a nuclear weapons armed Palestinian protection force as part of clearing the IDF out of the occupied territories.

Search ‘ Troonatnoor ‘ and vote for John Fitzgerald 11th district California & vote for Bill Fawell for ILLINOIS 17th congressional district in the midterm elections on November 6 2018 , Both good men And also watch, share & reupload this Troonatnoor video everywhere to anyone you can ( scroll the video down after the image ) next loxist video everywhere to anyone you can this is the reason that what bill be done in Hell aviv district will be done , as a resistance against Loxism then the masses will awaken from this to this truth , and that operation will not it benefit the Loxists cult of Judah , it will be a real NONE-false-flag-patsy-shill-controlled-opposition-conspiracy-psy-op-secret-service that wont have anything to do with cia, mossad,mi6 etc’s influence or mainstream media influence . Save the white race search ‘ white genocide project ‘ https://www.youtube.com/watch?v=cLdxmeELGbE

Search online for ‘ Troonatnoor ‘ and vote for John Fitzgerald 11th district California & vote for Bill Fawell for ILLINOIS 17th congressional district in the midterm elections on November 6 2018 and maxime Bernier for Canada prime minister in 2019 , all 3 of them are good gentlemen And also watch, share & reupload this Troonatnoor video everywhere to anyone you can ( scroll the video down after the image ) next loxist video everywhere to anyone you can this is the reason that what bill be done in Hell aviv district will be done , as a resistance against Loxism then the masses will awaken from this to this truth , and that operation will not it benefit the Loxists cult of Judah , it will be a real NONE-false-flag-patsy-shill-controlled-opposition-conspiracy-psy-op-secret-service that wont have anything to do with cia, mossad,mi6 etc’s influence or mainstream media influence . search ‘ white genocide project ‘ . Americans , Don’t work , buy , guns , go protest with signs together and hold your guns for Liberty , No loxism , Go vegan , Save the white race !https://uploads.disquscdn.com/images/efc05812ee30b07662fd04f49a73934ed47c8e26aa38593eac5a9d4fd08c6bb0.png https://www.youtube.com/watch?v=cLdxmeELGbE

Kill all the republicans first, after kill most of the democrats

No matter who you vote for, you end up getting a politician.

that is too easy, someone has to do the job, or do you happen to know a wonderfull system without politics?

It was a joke dude.

Putin is complete coward and an idiot and is groveling to Erdogan. Syria is now effectively partitioned permanently.

Poor Mr Putin, he has to meet some some very nasty people.

Erdogan is just like Trump, a fool who thinks he can outwit smart people. Who will kill him first, the Americans, or the Russians?

he is one of the richest men of the world

Yeah and you can see it, Putin Towers, Putin Golf course, Putin a Lago.

The thing with Americans is you judge others by your own experience. Because all American politicians are corrupt, and steal from the American people, you assume all politicians. Americans have never seen a patriot, a man who puts the welfare of his country, before greed.

I know you will find this impossible to believe, but some people value other things more highly than money, Putin is one of those people. His greatest dream would be to free Russia from the American threat, money means nothing to the man.

ruskies have their money in offshore banks.

check the history of mariage of putins daughter. together with his exhusband ;)