On January 19, clashes between Syrian army troops and ISIS terrorists continued in the Syrian city of Deir Ezzor.

The cemetery, the al-Assad Hospital, and the An Fourat University remained the main secene of fighting between the sides. Separately, ISIS attacked government troops near the Rashidiya District and seized few points in the area. This was the most notable success of the terrorist group in the city since yesterday.

ISIS units also attacked the Deir Ezzor Airport from the western direction but failed to overrun army defenses there and were pushed to retreat.

Last night, a Russian cargo plane dropped supplies to the government-held area of Deir Ezzor. This fact and supplies and reinforcements received by government forces earlier this week will allow the Syrian army and the National Defense Forces to stay strong under the pressure of the terrorists. 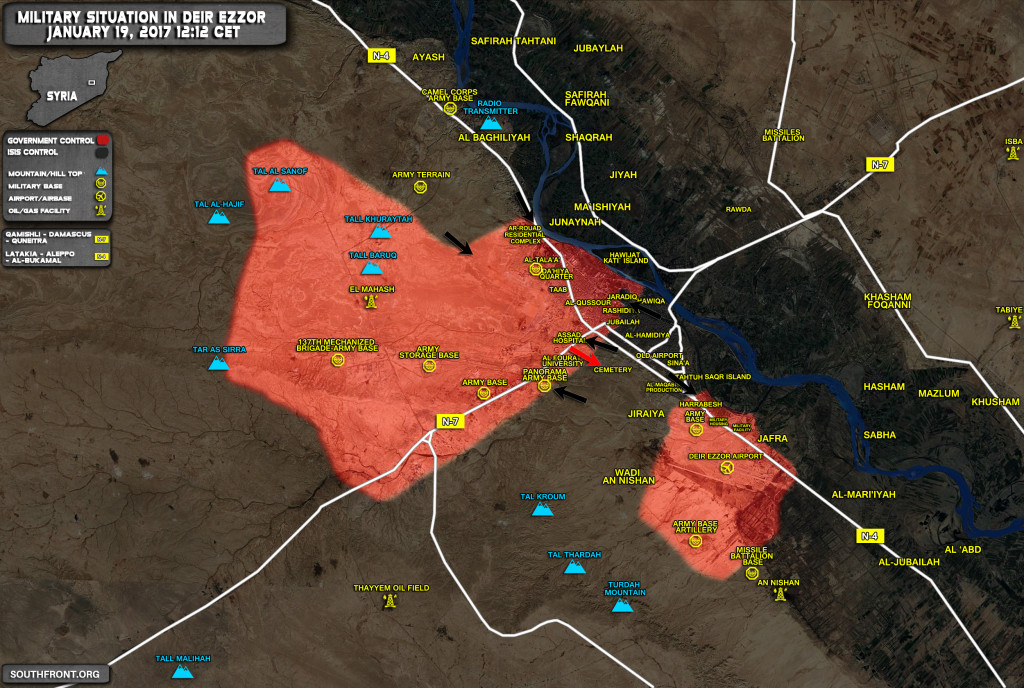 What will happen to the civilians within SAA held territory?

How do they get food?

We can recommend this https://southfront.org/the-stronghold-of-deir-ezzor-all-what-you-need-to-know-about-the-battle-against-isis-in-eastern-syria/

They’re boned? Either from not enough food or at the hands of ISIS. Unless the SAA gets its shit together and starts pushing east.

They will get much more food from the SAA than what the US run ISIS will ever bring!

Could the Russian’s nogotiate between the SAA and Kurds for the safe exit of SAA in Al-Qaqmishli and Al-Hasakah to go south and help their commrads in Deir ez-Zor?