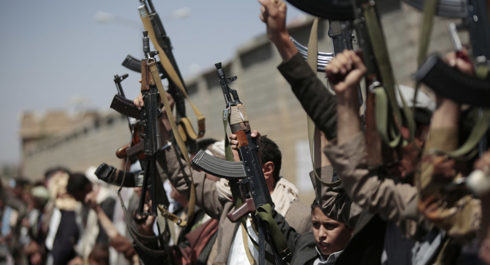 On July 29th, Houthi and Yemeni army troops killed four Saudi soldiers and have captured two others in counterattacks near the border, as reported by al-Masirah.

These developments happened during the Yemeni army’s attack on the Mash’al military base in the Jizan region in the southwest of Yemen. Furthermore, Yemeni snipers killed eight coalition-backed fighters in Jizan as well as in the west-central Yemeni Province of Ma’rib and the impoverished country’s west coast, al-Masirah reported.

Al-Masirah has also published a video showing army operations against Saudi-backed troops in the Ta’izz Province in the southwest. The operation, as reported by the Yemeni Media, led to the seizure of an Emirati military vehicle, and an unspecified quantity of weapons and ammunition.

This escalation comes as a result of heavy airstrikes carried out by the Saudi-coalition on the city of Hudaydah. According to residents, the airstrikes began in the early hours of July 27th and targeted a police station in the center of the city and a plastics factory in the northern part. The districts of Zubaid and Tahita, located in southern Hudaydah, were also bombarded.

On July 30th, al-Masirah reported that the Saudi-led coalition has killed 4 and injured 5 more civilians, including children after an attack on the al-Hale district in Hudaydah. They also launched four raids on the Agricultural Extension Center in the al-            Duraihemi district, two raids on rural hospitals and sixteen other raids on areas in al-Duraihemi.

Al-Masirah reported a civilian was killed and three others injured on Friday after an undetonated cluster bomb went off in Zubaid. Cluster bombs, which have been also used in the past by the Saudi-coalition are banned under the Convention on Cluster Munitions (CCM).

The Saudi-coalition’s offense to capture Hudaydah began on June 13th, with operation Golden Victory. However, the Saudi-led coalition has had no success against the Houthi resistance.

On July 25th, the Saudi government announced the closing of the Bab el-Mandeb for oil shipments after the Houthis reportedly attacked two crude oil carriers. The Houthi, however, reported through al-Masirah that they attacked two military vessels. The Houthi have also threatened to block Bab el-Mandeb, claiming on July 26th that they possessed the naval capability to hit Saudi ports and other Red Sea Targets.

UN Special Envoy Martin Griffiths who is tasked with mediating the peace negotiations between the Houthis and the Saudi-led coalition has found no success in his continuing attempts to establish a dialogue between the sides.

The Houthi refuse to surrender the city of Hudaydah to the Saudi-led coalition and would only allow a supervision by the UN, while they remain present in the city.

On July 29th, the international non-government organization Save the Children warned that Saudi attacks could create conditions for a catastrophic new outbreak of cholera, which could affect thousands of people in Hudaydah. Helle Thorning-Schmidt, the body’s CEO reportedly claimed that the bombings could turn Hudaydah into “ground zero” for an outbreak.

Yemen, and Hudaydah are in a increasingly worsening humanitarian crisis, caused by the maritime and aerial blockade imposed by the Saudi-led coalition.

Saudi kingdom will lose every thing due to war against Yemen. US and UK keeping Saudi kingdom like a cash cow and when Saudi Kingdom become old then they will slaughter them for meet.