An intense fighting resumed between pro-government forces and Hayat Tahrir al-Sham (formerly Jabhat al-Nusra, the Syrain branch of al-Qaeda) near the village of Hasnawi in the northeastern countryside on Monday.

Hayat Tahrir al-Sham attacked Syrian Army positions near it in an attempt to seize the nearby hills and to prevent government forces from developing momentum in the area. In turn, the army seeks to setablish full control over Sarha, Sarh Shamali, Rahjan and Jakusiya. If this is done, the army and its allies will make another important step in their long way to reaching a part of the M5 highway controlled by militants.

Hasnawi was captured by government troops on Sunday. 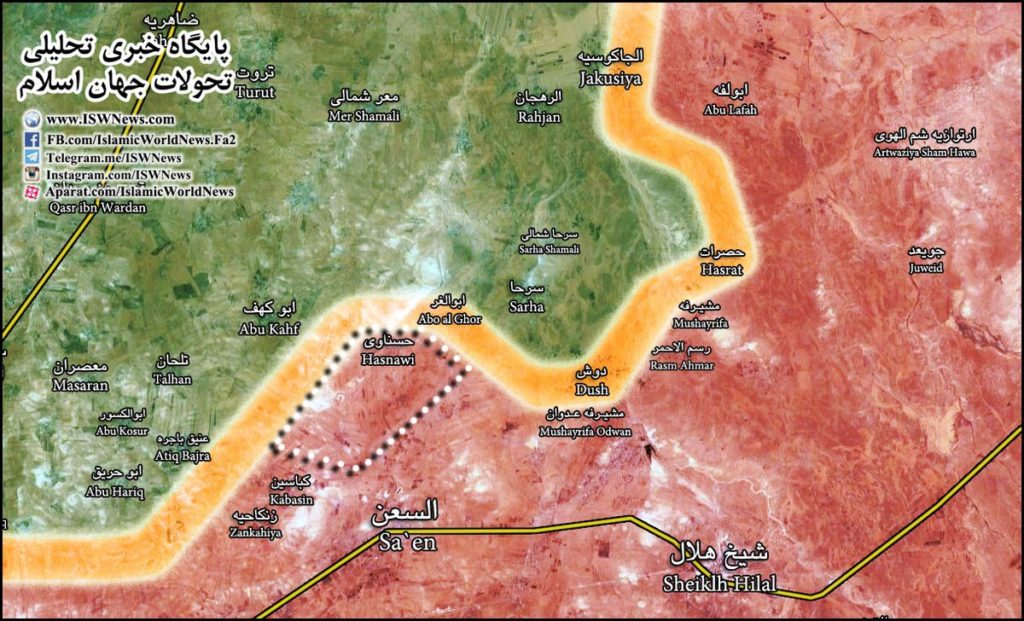 I’m sure air power has been instrumental for the Syrian Army’s success, but I get worried every time I hear about them using it in Idlib. All the so-called “moderates” have to do is wait for an airstrike to hit, and then set off another Gas/Chemical bomb in the vicinity. Oh, and of course, film the suffering and eventual deaths of their victims. From that point onward, the western media giants would do their trademark “spin & spread” propaganda routine.

I also think if (and hopefully not when) another “regime chemical weapons attack” occurs, the danger of an escalation from PROXY war to REAL war would be insanely high. I’m guessing at worst, an attack from the USAF initially focused on the Russian contingent in Syria. (This is what the hawks in Washington were pretty much demanding after the previous false flag op)

Not long after the “beautiful babies + beautiful bombs” shit storm, I was really wishing the SAA could somehow get by without their air support. My assumption must have been that they couldn’t be framed for using chem-weapons if they weren’t conducting any airstrikes. Well, it turns out I was wrong. Back in 2013 the accusers claimed that the SAA used a ground based missile carrying sarin gas. That false flag got debunked (probably on accident) by the UN investigators who actually went to the crime scene in Eastern Ghouta. Maybe THAT’S why non of the A-holes pointing fingers were willing to do an on-site investigation this time around…

The Syrian government forces should not be conditioned by such considerations and should instead focus on getting the job done by all the legitimate military means available to them. If the Zio/Nazis want to carry out a false flag attack, they would carry it anyway, however cautious the Syrian government forces are. I would not be surprised that they would say that the syrian soldiers were farting Sarin gas from their hind, if the Syrian army were to simply use foot soldiers! So get the job done with the most effective legal weapons you have available and don’t bother about anything else. Period.

Al Qaida is the shameful US/Zionist/NATO !

Google is paying 97$ per hour,with weekly payouts.You can also avail this. On tuesday I got a brand new Land Rover Range Rover from having earned $11752 this last four weeks..with-out any doubt it’s the most-comfortable job I have ever done .. It Sounds unbelievable but you wont forgive yourself if you don’t check it !fq150d: ➽➽ ➽➽;➽➽ http://GoogleLegitimateTrueJobsFromHomeJobs/get/hourly… ★✫★★✫★✫★★✫★✫★★✫★✫★★✫★✫★★✫★✫★★✫★✫★★✫★✫★★✫★✫★★✫★✫★★✫★✫:::::!fq150lhhh

In true Nuremberg style the trial should be held in Haifa and Riyadh, and the judge, jury and the executioner should be Palestinians, Iraqis, Syrians, Libyans, Yemenis, and the Lebanese. Oh and the Iranians of course!