Civilians are leaving the militant-held part of Syria’s Idlib province via a Russian-established humanitarian corridor in the Abu al-Duhur settlemenеt, Russia’s Center for the Reception, Allocation and Accommodation of Refugees says.

“We have established cooperation with the governor of the province; we’ve created a commission that deals with the issues of the refugees’ return and identity check. There are a lot of people returning, whose identification and property documents were lost in the fires during the fighting,” the head of the Center’s Aleppo Province Department Oleg Demyanenko said, according to the state media.

According to Demyanenko, all the fleeing persons are checked via Syrian databases to see whether they have any problems with the law. Thet are also checked for weapons and explosives. Somee people have reportedly tried to smuggle fire arms. However, these cases are rare.

The miliant-held part of the province of Idlib is located in the so-called Idlib de-escalation zone agreed by Turkey, Iran and Russia in the Astana format. Under this agreement, a ceasefire was established in the area and the Turkish-backed opposition had to separate from and then eliminate the terrorist groups, including Hayat Tahrir al-Sham, in the area. Nonetheless, nothing has been done by Turkey and its proxies to combat the terrorists.

So, now, the Syrian Army is looking for an option to launch a military operation in the area.

The two convoys of muslims displaced from Quneitra and Daraa in the south of Syria, who were due to arrive in northern Syria (Idlib) in the morning, were ambushed by Iranian mercenaries which delayed their arrival to Idlib for approximately 7 hours. https://youtu.be/y2etAzRKJ9Q?t=31s

so now according to you there are iranian mercenaries in syria. I often wonder do the pay you or you just a drug addict working for your dosage.

“according to you there are iranian mercenaries in syria” Are you trying to evoke that there are not, and im making this up? Wake up bro. Neither, both your options are wrong. I reject drugs including alcohol and ciggaretes and i don’t care about money.

You are totally stupid and same goes for people who upvoted you. Who ever dont agree with you or says something about Iran is automatically hasbara, you pathetic fool. Labelling somebody is always privilege of the scum.

hasbara has many meanings pussy. It is not a matter agree or disagree with me, is the constant jerking off you do here.

as far you concerned you doing an excellent job all by yourself jewish slut.

There are several kinds of iranians in Syria. Basta.

are they retard? Go sell your hasbara propaganda to someone else stupido not here and basta go tell your parents who produced a piece of shit like you.

Facts are those iranians are there whatver You deny them or not.

no one is deny that iranians are there on the official request of the legitimate government of Syria retard. Now kindly go fuck your self and dont assume you can talk to me again motherf*cker is this clear?

If so, its a very, very big one covering the whole world.

If the Jihadi propaganda is accurate, “Iranian mercenaries” are supposed to gut them and spit them, delay their arrival permanently.

are you half asleep? since when their propaganda is accurate and who listen to it but mentally challenged individuals?

There are. You all should have opium for breakfast.

Nothing in Islam says Yiu systematictly has to lie – Only You can.

Dont You have internet.

It’s an Israeli who does a fraudulent Sunni extremist ISIS act – this is now the third avatar name for same source. At its high tide mark the ISIS occupied Syrian and Iraqi territory was basically exactly the ‘Sunnistan’ that the United States Institute of Peace (!) a Pentagon think-tank published in a reconfigured ME map in 2013 (see below). This concept for re-configuring the two regional secular Arab states was of course endorsed by the then Israeli Defense Minister Yaalon during an official visit to US. Hence, why Israeli trolls do their pro ISIS routine here. ISIS were the shock troops that were to initially carve out and radicalize a sectarian Sunni partition of Syria and Iraq – to be later replaced by ‘sanctioned moderates’ – and de facto break Syria and Iraq into a series of sectarian based smaller states. This would have both ensured Israeli regional power and diluted criticism of the Jewish State in the region – as all these micro states would be ethno-religious based entities blurring the presence of the Jewish one. 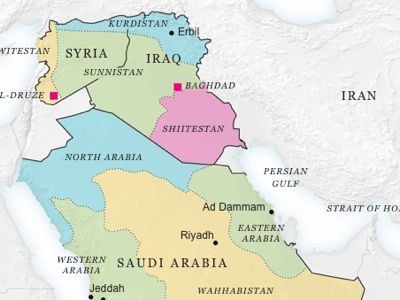 I know exactly who he is and what the game is as well their IPs. Check my posts to him and his replacements, as is not one poster.

i think the plan was 3 states or parts of iraq. you never hear
much about basra being attacked by jewhadis. the basra folks
protect their territory pretty good.

Hey bitch, quit talking like an israeli, your takfiri brothers dont like that….oh wait they do because your all israeli bitches.

I am so tired about Your use of takfire, infidels, halal, haram, mukra and sandniggers. At least You could clean Your dirty mouth friday turning around a shoe or something.

I choose a word your cubicle neighbor would understand. You can take your politically correct BS and shove it. Go have a tuborg maybe your grammar will be better

And quite frankly after what you and your kind did to the people of fua and kafrya, you should just sit in your corner and be quiet. You should be grateful for the clemency of the SAA and the goverment, any other place you would be shot on sight.

Well, facts are, many are not. Actually they have left their corners because of you in an – Enough is enough.

They did not kill more then 500.000 or made 11 millions into refugees and displaced. By that some unfamiliar to me Kafrya and Fua are small accidents.

And of course You did nothing, apart serving tea for Your wife.

I seem to remember an incident where Al Nusra and its associated headchoppers did the exact same thing to busses full of evacues from that Shia enclave next to Idlib city. So even if true, what goes around comes around? You reap what you sow?

Thats right. Several has done like that. No patent.

“…nothing has been done by Turkey and its proxies to combat the terrorists.”

Are we astonished? Turkey is in dire want of being flushed.

Evacuating civilians from Idlib. Well why would they do that? Is Assad planning to start a military operation in Idlib? Erdogan will not stand for that and I am sure he called Assad to give him a peice of his mind:

Executive assistant (EA) – Mr. President, a call is coming in from Turkey, I think it is Grand Sultan Erdogan (TM).

Bela Lugosi – welcome to the Great Nation of Syria automated menu system. My name is Dracula and I will guide you through the menu options.

Lugosi – this automated system selects a guide personality that represents the best fit regarding personality, like mindedness in values and principles etc. in order to put you at ease and provide maximum satisfaction.

Erdogan in a raised voice – WTF… put me through to President Assad, now!

To pull all Turkish military forces out of Syria and tell Assad how very sorry you are, press 1
To ask Assad for his forgiveness and submit to being spanked with a large paddle, press 2
To write 1,000 times on the chalkboard: I renounce all support for headchoppers and refrain from naughtiness, press 3|
To do all of the actions above, press 4 and your name will be entered into a draw to win a dinner date with Assad where you will have additional opportunity to grovel

Erdogan yelling – enough, give me Assad you idiot

Lugosi: Thank you, your selecting 4 has been duly noted and your name will be entered into the draw. Have a great day.

Erdogan continues to yell into the phone but soon notices the dial tone.

time for you to go and see a psychiatrist now don’t delay any longer. you getting worse

Relax, so serious. That said, there is an important message in my satirical post:

(1) Assad and his allies have signaled Idlib is next.
(2) Turkey is a major power broker in the region and the ball is in Erdogan’s court
(3) Assad has reason to be weary of Erdogan’s intentions so there is mistrust

Erdogan needs to step up to the plate and make clear his intentions and as leader of a major regional power, put aside personal goals when conflicting with the interests of the nation he leads.

I say this, because in my opinion, Erdogan (and members of his family) have acted in ways that have put their personal interests ahead of Those of the nation he leads.

I have read your comments and gather you are a proud Turkish nationalists and I can respect that. I see Turkey at a crossroads here where decisions will have major implications for Turkey. Do you agree?

Pour your energy into posting what you think Erdogan should do In the current circumstances. I would really like to know what you think. It is a difficult time for all nations in the Middle East and voices of the people should make themselves heard. Your voice can make a difference.

Better map, and excellent to see how the things go on in Idlib, there are Nusra strips everywhere, surrounding or half surrounding the green zones. I’m curious to see what will sort from Sochi conference.

Is Turkey insane? Courting all Qaida is exactly the justification for the US invasion of Afghanistan.