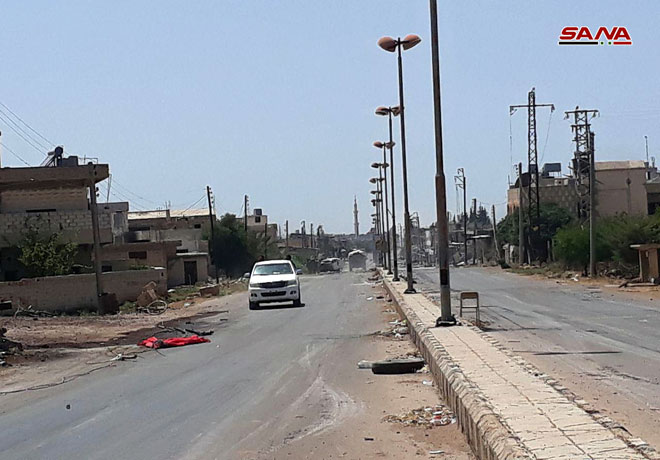 Almost 4,000 people have left the militant-held area in southern Syria over the past 24 hours, the Russian Center for Reconciliation of the Opposing Parties in Syria says.

According to the Syrian government, 2,500 people have been accommodated in the Jabab refugee camp in the government-held part of the province of Daraa.

“We have prepared this camp a week ago, we knew that many people will come. Right now, it is home to 2,500 people. We installed tents and brought water. We receive assistance from international humanitarian organizations, but the bulk of aid comes from the Syrian government. We distribute mattresses and blankets, as well as medicines and food,” the Russian state-run news agency TASS quoted the camp’s chief Abdul Hamid al-Rifai.

Earlier, the Russian Center said that 27 settlements in southern Syria have come under control of the Syrian government thanks to local reconciliation agreements reached in the area over the past week.

On July 3, US Department of State Spokesperson Heather Nauert announced that the US and Russia are negotiating on the current situation in southern Syria.

She added that US State Secretary Mike Pompeo had discussed the ceasefire in the region with his Russian counterpart Sergey Lavrov earlier on the same day.

The US has repeatedly accused Syrian government forces and their allies of violating the de-escalation zone in southern Syria by carrying out operations there. However, Washington ingores the fact that Hayat Tahrir al-Sham, which is the main target of the operation, is excluded from the ceasefire.

I still cannot understand why the US is in Syria in the first place. They are just trying to be relevant I guess.

Because Syria was an ally to Iran and the go between for Iran into supplying Hezbollah in Lebanon. Israel didn’t like it and sought to get rid of Assad by installing, well basically anything but another Iranian backed regime into Damascus. Anything would do as far as Israel was concerned, even ISIS. And since the Americans are Israel’s lapdog they basically did most of the dirty work for them.

You forgot to mention the “greater israhell” wet dream.

And to continue to pad the bank accounts of the despicable weapons contractors.

And lafarge and caterpillar, every bit of militant gear I saw was brand new North American cat.

If someone can show me militants running some old piece of crap doosan , plz show it because I haven’t seen it.

That should read 5 words US/UK/Israel/KSA vs Iran, now who support terrorists in other nations, hence I rest my case.

I figured I’d keep it simple.

Personally I wouldn’t put the UK in there myself. Methinks they’re only in it because they are America’s main sidekick and feel they have too in order to maintain that status. After all, Macron is hot on their heels in that regard. Other then that the UK has no skin in this game.

US and Israel both are migrants and both are terrorist organizations. They don’t have their own lands. They just stealing lands from other nations. They are ultra thieves and child butchers.

You can call me Al
Reply to  Nabeel Mehboob

US $ to be used NOT Euros as Assad wanted to do. Same as Libya (Gold) and Iraq (Euros) + others.

As the moderation system handels editing comments as spam I have to post it again. Hopefully this time it won’t mark it as spam because someone cares about correcting spelling errors:

There is a plethora of reasons why, some already have been mentioned.

– The planned pipeline from Iran via Iraq to Syrias mediterranian coast, which would make oil availble in Europe without carrying it around the Strait of Hormus and the Suez canal.

– Chinas ‘one belt one road’ initiative, as it goes right through the middle east, threatening the US hegemony.

– Syria traded goods like oil & gas (and more) with the Skt. Petersburg exchange in Yuan and Rubel. A no go for the USA, as it threatens the petro dollar, the fundamental base of the USD.

– Syria turning towards Russian and Iranian influence, after the Iraqi wars, as they saw that they wouldn’t have a future under US hegemony (Syria supported the USA in Iraq first).

– Oil reserves in Syria are not a big deal, nevertheless, a drug addict takes every shot he can get.

– Destabilization of the world and Syria being part of it (Arab spring, etc.). The main reason is, the US hegemony can’t go on if other countries catch up technologically, thus maintaining an advantage by turning the world into a haven of chaos, where the arising powers are neutralising each others, thus not threatening the US hegemony. The Iraq – Iran war was a good example from the past for that approach, but had a different setup back then compared to today.

– The reason why the IS was called Islamic ‘State’ from the beginning, their role was to occupy a part of Syria (same for Al-Qaeda with Idlib) to split the country apart and to diminish its power.

– Rebuilding Iraq with US companies, the same was planned with Syria, to the advantage of US companies again, which already is clear that it won’t work out.

– Weapons industry contractors being able to sell their tools of death, ‘the show must go on’. (just as example: Remington already went bankrupt in the USA, not enough weapons in demand, but they mainly targeted the civilian market) ___

There is probably more to mention, but that should give us an decent overview already.

U.S. stop Cryin’ & Moanin’ start packin’ your Gear & Get the f*ck out… end of discussion….

F,UK,US,israhell, Saudi fake Muslim Zionists, and get the fuc k out of Syria, Iraq, and then mind your own business.

That about sums it up rather well, bravo Sir.

“She added that US State Secretary Mike Pompeo had discussed the ceasefire in the region with his Russian counterpart Sergey Lavrov earlier on the same day.”

Oh vey !!!, here we go again, rearming and boosting the numbers of the vermin terrorists. If that happens, Russia, should take back the Golan Heights and eliminate Israel + Jordon….. the US is doing an outstanding job at killings itself from the inside.

.Nauert seems unaware that this is Syria.

Nauert is one of those New Englanders they are so obtuse it’s pathetic think she is BPD(borderline personality disorder) with touches of Narcissistic and sociopathic tendencies they are totally clueless to anyone but themselves.