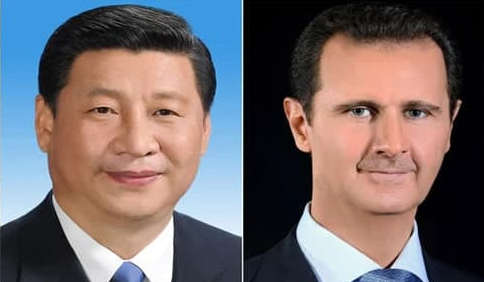 In a press release, the state-run agency said that the two leaders s discussed the close bilateral relations between their countries and means of expanding mutual cooperation during the rare phone call.

“President al-Assad stressed Syria’s keenness to develop ties between the government institutions in both countries, particularly with the improvement of security situation in most regions, and at the same time, accessing the Belt and Road Initiative, which constitutes a road for economy and development,” the press release reads.

The Syrian President also thanked President Xi for the large humanitarian assistance that China offered to the Syrian people to alleviate their suffering over the last few years.

Assad also reaffirmed that Syria is “determined to liberate all its lands from terrorists and the occupied foreign armies,” as well as “to push the process of dialogue among political parties forwards without any external interference until reaching full stability.”

Furthermore, the President congratulated his Chinese counterpart on the 50th anniversary of China’s restoration to its legitimate seat at the United Nations and stressed Syria’s support to China in the face of western campaigns which attempt to strike stability in Asia southeastern region and China South Sea.

From his side, President Xi said China attaches great importance to the development of China-Syria relations and is willing to work with the Syrian side to promote greater achievements in bilateral friendly cooperation.

“We welcome the Syrian side’s participation in the Belt and Road Initiative and Global Development Initiative,” said Xi, according to CGTN.

The Chinese President also expressed his country’s readiness to work with Syria to promote the common values of humanity and facilitate dialogue between civilizations.

The Chinese-Syrian relations saw much progress this year. In July, China’s Foreign Minister Wang Yi arrived in the Syrian capital Damascus on a pre-planned visit. Yi was the most senior Chinese official to visit Syria since the outbreak of the war in the country in 2011.

Recent reports in the Arab media claimed that China had been providing military support for the Syrian Arab Army against Uyghurs terrorists in the northwestern Syrian region of Greater Idlib.

While China’s support to Damascus appears to be growing, the recent reports of military support by Beijing remains unconfirmed.

The chinese could end this in a few weeks,just deploy the PLA to Syria,they have a reason because of the Islamist terrorists in China,some of them are in Syria.

Exactly, the only problem is the fact that some civilians won’t leave and if they get killed, it will be perfect propaganda for Saudi, USA and Israel

Well people need to get past what the hell anyone else thinks,the Syrians have a Country to liberate no matter what the cost,i can’t remember the US Nato or Israel caring what anyone thinks.

If Bashar just starts shooting down houses and killing people, he’ll start losing the only bit of support he has slowly. It’s really easy for Zionist to twist the truth to their sheepeople

The Urigurs in Syria dont come from China at all. They are from Uzbekistan, Kazakhstan, and Kyrgyzstan

Some re from China,and to be clear they still present a problem for China.

the uighur speak the same language as those from uzbek/ Kazakh/ Kyrgyz and are physically indistinguishable from each other no?

Then why has China requested extradition of Uighurs known to be in Syria back to China?

We get a social experiment. What happens to Chinese society when a generation of one-childs suffer casualties. On the economic side. i guess it gives more time for China to support its greying population

China want to learn the Syrians to educate and work. Hard times and impossible.

Assads probatly will ask for smogscreen for own activities and CO2 to calm down the enemies with.

The Chinese Guantanamo puts the Anglos to shame, how really to deal with a security threat! Go CCP! No more ass bowing to Allah in Mecca, knee whining to Jesus in Rome, or burning babies for Moses in Jerusalem!

Learn you some English, dumbass.

Yes. Real combat experience is exactly what the Chinese lack and need more of it. Small clashes in the mountains against the Hindu rabble don’t count.

Not only do they lack military experience but they refuse to get involved in any overseas conflicts and more disturbingly are the biggest recycling house for the US dollar carry trade along with both japan and sawdi judea. They’ll never disturb the arrangement they got going with the West.