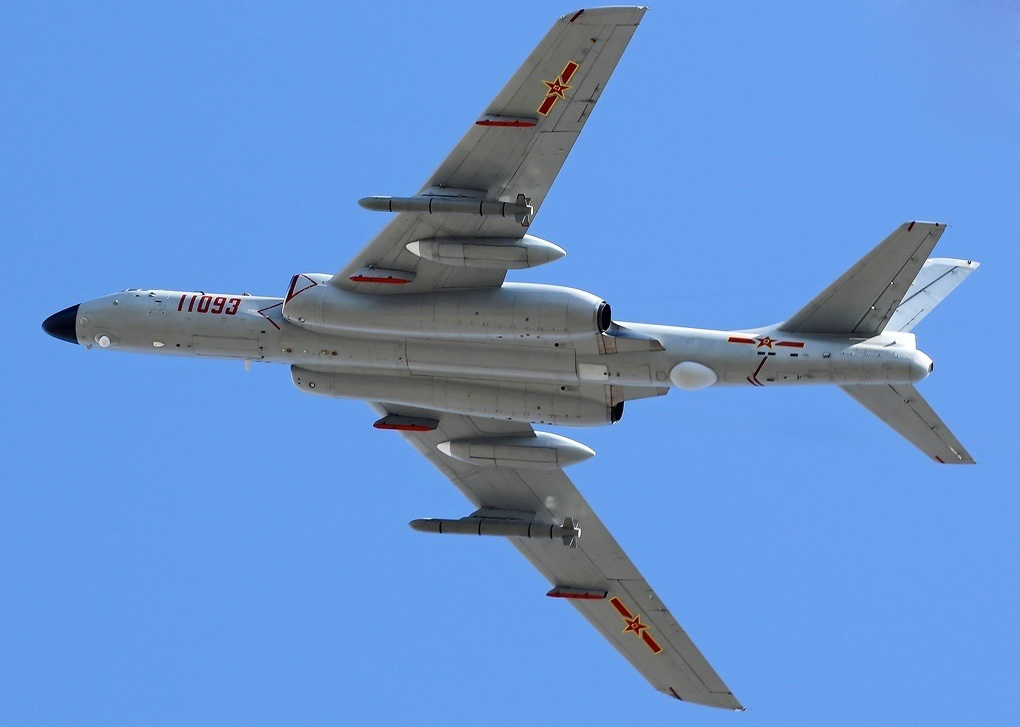 China will send its H-6K strategic bombers, J-10A fighters, JH-7A fighter-bombers and IL-76 transport aircraft to participate in the upcoming International Army Games, which will start in Russia on July 28.

“Participation in the International Army Games is an effective way to improve fighting capabilities under real combat conditions,” a spokesperson for the People’s Liberation Army Air Force announced on July 12, according to Xinhua. “The troops will strengthen military training and war-preparedness to improve their ability to safeguard China’s sovereignty and territorial integrity.”

It is the first time the strategic bombers and transport aircraft of the Chinese military will participate in overseas war games. Belarus, Azerbaijan, Kazakhstan, Armenia and Iran will also join the drills.

I think it was on RT, where it stated there would be 32 Countries attending. Does anyone have the full list of Countries as I have failed to find it. Please.

Thank you. Amazing number of Countries if you think about it.

Vietnam, Myanmar and the Philippines, wow, that is a surprise, that I dont think the Yanks will like.

Yes. It seams that Russian prestige in the world is growing bigger every day.

Why? Do you delight in the zionist appeaser Putin, who’s voted for every Deep State war at the UNSC (most recently making weapon supplies to the defenders of Yemen illegal while selling Russian weapons to the Saudi invaders), preparing for WW3?

Jewish puppet Putin is good for exactly ONE thing- preparing Russia to fight WW3 better than the USA. Sorry, I’m I supposed to be so STUPID I think this a ‘GOOD’ thing?

The jews know many of their opponents are BETA MALES who get a hard-on talking about military tech. War is good for the jews, so this fact serves them so very well. SF runs wholly on this basis.

Now military violence CAN be used to ‘put out fires’- but one will know when this is the case. And putting out SMALL fires while stoking far bigger fires (as Putin does in Syria) is always evil- tho the dumb-dumbs can always be persuaded to focus on the small fires as if there is any real victory for us there.

These new Russian wargames involve some of the worst regimes on the planet. Regimes directly associated with GENOCIDE in their recent history. Just how Putin likes it. Genocidal regimes tend to have strongmen who can authorise most of that poor nation’s domestic budget to be wasted on war toys.

This place is starting to look like the nazi cheering forums seen in Germany in the 1930s. Hurrah, hurrah, Putin is selling weapons to the worst butchers on the planet. Just how the jews like it- for the jews know just how pathetic so many of their male opponents really are.

SF wants people to have a love of war for war’s sake. Judging by the regular trolls in the comments here, they have carefully built up an ideal audience.

Go blow yourself a bubble.

Russia Inducts Its Own ‘Carrier Killer’ Missile, and It’s More Dangerous than China’s

Avangard can be used as a carrier killer as well, with far greater range. KH32 as well.

“The Avangard is a strategic intercontinental ballistic missile system equipped with a hypersonic glide vehicle” http://www.defenseworld.net/news/22162/Russia___s_New_Avangard_Hypersonic_Missile_System_To_Enter_Service_By_2019#.W0n2b9L3Oho ———————- “The Avangard is a strategic intercontinental ballistic missile system” The warhead is either nuclear (from 150 kilotonnes to 1 megatonne) or conventional. http://tass.com/defense/993615 ———- Avangard to be an advanced cruise missile capable of speeds in excess of Mach 20 launched by a ballistic missile into the exo atmosphere above 100-to-150 kilometers of altitude. http://www.deagel.com/Offensive-Weapons/Avangard_a002719001.aspx ———————- It is not anti-ship missile but (ICBM launched) belongs to strategic (cruise) missile (hypersonic glide vehicle) category. It is not operational yet. One “can” use sledge hammer to kill the fly also. What “can” be done is not always the best option to chose. First to know that nuke weapons provoke nuke response. That is huge overkill on the level of shear power. So it is not built to target moving ship but destroy military harbor with all the ships in it. Also launching ICBM’s with Avangard can provoke alarms for the nuke attack.

Hypersonic glide can carry conventional warheads, Avangard vehicles can be launched from an ICBM from within Russia, the ICBM does not have to leave Russian borders, once deployed the hypersonic weapon will glide for thousands of kms until it reaches its target. Prompt global strike using conventional weapons ( not nuclear ones) to debilitate strategic command, communication and weapon systems.

MIRV warheads can accomplish the nuclear strike, Avangard gives you a dual option for more surgical strikes without passing the nuclear threshold.

I have written you there already that it can “carry conventional warheads” so no need to repeat it. Again you go with your “can”

” Avangard vehicles can be launched from an ICBM from within Russia”

Wrong! Avangard’s are ONLY launched with ICBM’s and with no other way.

Excuse my language but your system is totally stupid. You would launch ICBM ABOVE Russia to target an aircraft carrier in Pacific?!?!! You think that is easy and feasible?! And how would Avangard hit the moving target gliding “for thousands of kms until it reaches its target” in Pacific if target was gone?!? Carriers can go as fast as 30 knots ! Even on Mach 20 Avangard needs 30 minutes to fly 8000 km !

Avangard can be used against any target hypothetically, it has to be deployed by a heavy lift rocket, and then it is released and it glides to its intended target. It can be a carrier in Pacific or a carrier docked in Virginia, or anything else. After it is released, Avangard is pretty much a fire and forget weapon, having trajectory paths defined by information received by satellites and when it gets close to the target it’s target acquisition radar makes last minute corrections for a kill.

“””You just pretend to understand things you do not understand really.”””

Prove me wrong, you think Russia will divulge the capabilities of this weapon to the media? If you understand the concept of prompt global strike, what I am saying will resonate along rather well.

I have to prove you wrong?!?! What for ?!!? I say you are liar if you do not prove that Avangard is anti-ship missile ! I have posted 4 different sources for all I was saying but YOU STILL DID NOT give single link for what you claim!

So or you give proves or just shut up.

Avangard can hit any target it is directed at including capital ships, same way Khinzhal can hit naval and ground targets. They both are fire and forget weapons. You cannot accept that, that is your problem, I do not take my cues from military sites, what other people say. If you do not understand the purpose and capability of the weapon, that is your problem. Apparently you do not want to study what prompt global strike entails, you would rather have a pissing contest.

In short… you have not single proof for your bullshit.

And that is all that really is …a bullshit. That’s what I thought. You are full of it

So am sorry that you are challenged analytically and cannot think anything on your own, you always need to read something. Sarmat traveling at Mach 10 is BS. Consider the sources you are reading, and do a little more analytical thinking on your own.

You are BS artist. YOU HAVE NO SOURCE THAT CONFIRMS YOUR CLAIM ! You are bullshiting ! Not single article mentions your claims and I have seen quite few !

The contradicting info that you cherry pick has nothing to do with your argument of “ANTI-SHIP” missile ! Now back off!

Listen up Jako, I am the source …..get it? I use my knowledge to analyze various weapon systems and determine their true potential. If it is BS as you claim it……prove it. If you can’t prove, then shut your mouth, until you can…..and carry on a civil conversation.

I did not say Avangard was an anti ship missile designated for killing ships specifically, that is your red herring trying to put words in my mouth so you can argue.

Avangard is a weapon that can hit ANYTHING, moving or stationary. GET IT?

I’m not interested in your BS ! YOU HAVE NO PROVES FOR YOUR CLAIMS !!! Go away!!!

You don’t understand what I am saying because you are clueless and believe some numbskull article saying Sarmat flies at Mach 10. BS sticks to you, I said when you make a claim you have to prove it to yourself…..not some idiot article or what people say on the link. I am here, you go away and read your articles.

There must be an echo, you like repeating yourself, over and over ad naseum. What part of Eastern Europe are you? Esti un mitocan?

You have NO PROVES for your BS ! Shut up and go away !

While the Sarmat will carry multiple nuclear warheads, enough to devastate an area the size of France with a single strike, the Avangard will carry a single massive two ton warhead – approximately 3-4 times as powerful as those carried by the Sarmat. The Avangard can be said therefore to hit faster and deliver a more concentrated strike, whereas the slower and larger Sarmat will be able to destroy targets over a far wider area.

Ballistic missile speed is typically 7kms per second, I don’t know why your article claims Sarmat’s speed is only Mach 10, Sarmat’s warheads are 750 ktns, so the Avangard warhead is 3 megatons? Avangard will not hit faster than a Sarmat MIRV.

Azerbaijan, Armenia, Iran, Vietnam and the Philippines together in these drill is good news for global peace, and bad news for the Israeli colony of the U.S., whose futile attempts to isolate Iran will only backfire.

First task on Russia’s International Army Games is to get closest possible to the enemy without being noticed !