“Hello everyone I am an English artificial intelligence anchor. This is my very first day in Xinhau news agency.” That is how the world’s first AI news anchor addressed viewers in its showcase at the World Internet Conference, presented by the Chinese state media.

Developed by Xinhua and the Chinese search engine, Sogou, the anchors were developed through machine learning to simulate the voice, facial movements, and gestures of real-life broadcasters, to present a “a lifelike image instead of a cold robot.” 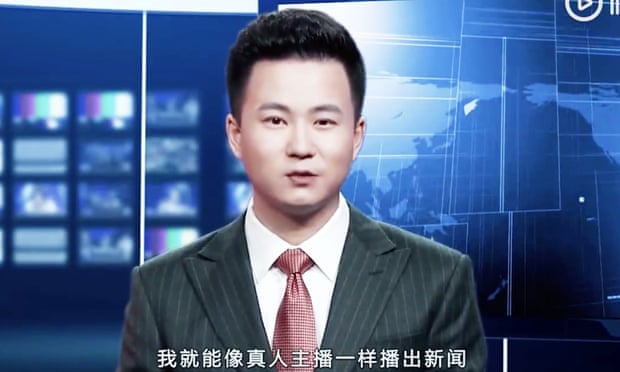 Picture above is Qui Hao, or rather the AI presenter based on his likeness.

According to Xinhua, the presenter “can read texts as naturally as a professional news anchor.”

Apart from introducing himself, the AI presenter also, expectedly, read some news to the viewers.

The 5th World Internet Conference is now underway in China's Hangzhou city. At a sideline exhibition, the online app — "AR-Museum" — is bringing antiques to life. pic.twitter.com/0Nv7YlZleC

“I will work tirelessly to keep you informed as texts will be typed into my system uninterrupted,” said the presenter in an introductory video. This newly developed system means that presenters can work 24-hours a day on any media’s website or social media channels, thus “reducing production costs.”

According to Xinhua, the presenter may be extremely useful in announcing breaking news in a timely manner, since it doesn’t require a live anchor to travel to the studio.

CNC English-language news has started tweeting with bulletins read by the AI anchor.

Although the AI voices are monotone, and their facial features seem expressionless, they are portrayed as life-like and have perfect lip-syncing capabilities while talking. All of this will only improve, as the AI begins to learn about their sound, expressions and lip-shape as their knowledge is constantly developing.

The Standard cited AI ethics expert Professor Noel Sharkey who claimed that the developers were able to model the virtual anchor from the “constrained set of expressions” live anchors use.

Sharkey had the following to say regarding the AI system:

“It is clear that the AI anchor is directly reciting continuous text that it is receiving. The AI component is in the use of machine learning for the difficult task of making the expressions of the CGI news anchor both match the text and look like a real news anchor. It will have been trained on a large sample of the real anchor’s expressions. News readers have a constrained set of expression to show importance, humour and gravitas which makes this possible. And developers will will need to make their AI more expressive and develop more language if it is to keep people interested, he added. Don’t forget that this is a CGI and so it can do anything. It could levitate above the news desk to illustrate a point or fly like a rocket. It could even turn into a rainstorm. There are plenty of tricks to make for an interesting news cast. But I can’t help but feel a slight shudder of a ‘big brother tool’ with an army of more realistic CGIs pumping out propaganda 24 hours a day.”

Mainstream media already desscribed the announcement as worrisome. Their argument is that Chinese media is strictly controlled even without an AI anchor being fed a constant stream of information. The Guardian cited observers who worry that China is turning into a “digital police state”, with technology from iris and gait recognition being deployed to monitor activists, ethnic minorities in places like Xinjiang, and regular citizens.

During the World Internet Conference, upon entries attendees saw their pictures instantly flash on a screen as soon as they passed through security checks. During a session on fintech, companies discussed cooperation with law enforcement, providing information for negligent citizens to be put on social credit blacklists.

“We are an important advocate for peace in cyberspace and a guardian of order,” said Huang Kunming, head of Communist Party’s propaganda department, speaking at the event. “China stands ready to safeguard the sound order of cyberspace.”

Despite a criticism from mainstream media outlets, China is slowly becoming a global information power, even behind its “Great Firewall.”

Don’t worry, CNN news anchors… you keep saying our economy is great and unemployment is low. You shouldn’t have any trouble getting one of those slave-labor jobs in an Amazon warehouse. Be sure to bring your CNN coffee mug – you’ll need it as a portable bathroom. You know – to keep your productivity scores high. Because it might not be fake news. Don’t blame the f’king ROBOT!

Can you flip the switch at the back of him. to “US lying, BS news and every two minutes he shouts USA, USA, USA”

Since when does CNN report good things about Trump administration?

Oh, it sounded better than the gimps on the BBC.

All the BBC Pay Equality arguments will be for nought. Wonderful :) As long as the AI robots self ‘identify’ as journalists , the BBC politically correct crowd will be looking for jobs as bottle washers.

Instead of former TV journalist Heather Nauert in the state department, they can put the Chinese robot on it.

This is like a God sent for the Jews. They don’t even have to use a useful idiot Shabbat Goy as their teleprompter reading propagandists anymore, they could just type in their propaganda directly inside a Shabbat robot and save the salary they used to pay their pet Goys.

MBS is already worried about it.

Does anyone here see the irony in “artificial intelligence”?

I welcome our new machine overlords and hereby hope that when they finally plug us into the Matrix they will deem it fit for me to become a famous rock star.