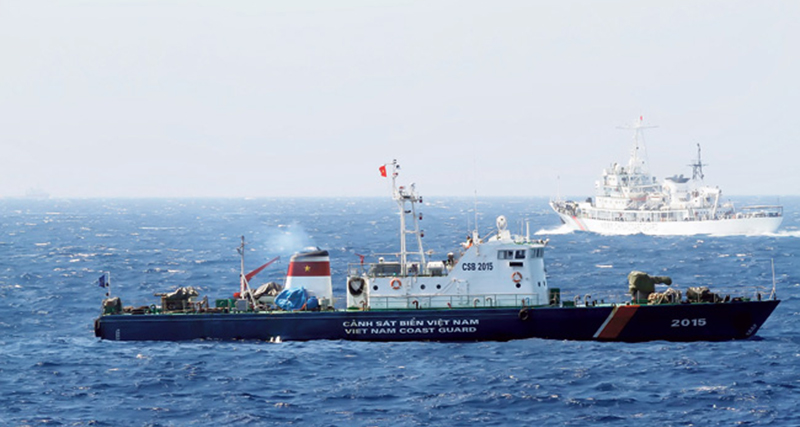 When the US Navy reconnaissance aircraft P-8A flew over coral reef in the South China sea in May last year, ignoring the warnings of Chinese warships, the crew filmed everything that was going on down there. Video showed dozens of cargo ships, full of stone blocks and gravel, around the reefs that the Chinese turned into an island. It was found that aero-naval base is being build, that the Chinese used coral reefs at seven positions to extend its territorial waters and economic zone.

Washington anxiously answered with militant rhetoric. It was clear that the Chinese navy wants the US Seventh Fleet set sail from the waters of the western Pacific.

Today Washington is further challenged because – as claimed by Taiwan – China allocated anti-aircraft missiles at a disputed island Woody, part of Paracel chain, controlled by Beijing more than 40 years, but on which both Taiwan and Vietnam make claims. There were set up, as seen on footage, two batteries with eight launchers of surface-to-air missiles and radar system.

Last year, after the analysis of images provided by the crew of P-8A aircraft, US Deputy Secretary of State Anthony Blinken distinguished himself by saying that China threatens to create a precedent by which larger countries are free to intimidate smaller ones. With that statement Blinken made victory over the then spokesperson for the State Department Jennifer Psaki, who said that it is a “long-standing policy of the State Department not to support military strikes.” Now US officials rely on one part of Blinken statement, warning that by placing missiles China intensifies tensions in the area.

The truth is, if we have in mind the American actions in international relations, that no one, and especially China, wants to be a small country which will be freely intimidated by bigger country and rockets really create tension. This primarily applies to Washington, because the Chinese had gone much further than the measures of defense and deterrence, by creating a force strong enough to inflict serious blows American Seventh Fleet. Strength of the Chinese Navy and Air Force is growing in an unprecedented speed, becoming the biggest challenge for America. A struggle for the disputed areas is understandable because the South China Sea has large reserves of oil and gas. In addition to economic benefits, the disputed area has a key military and strategic importance.

China protects its interests and rights, which, understandably, can lead to serious consequences, but it is certainly unlikely that Washington will enter into open conflict with Beijing. Pragmatic politics are led on both sides, because even the United States puts emphasis on strengthening the military presence in Southeast Asia. As the balance of power at sea in the region is concerned, the United States now have the upper hand, which comes with many allies in the region.

It is therefore clear why the spokesman for China’s Foreign Ministry says that any deployment of missiles on the territory of China is legitimate. He explained that there is no detailed information about the possible deployment of missiles and underlined that “each placed object has to do with national defense, but not with militarization.”

US on the other side explains that China is building a new islands, on which then puts military facilities with the intent to appropriate virtually the entire South China Sea and its resources. That sea is claimed by Taiwan, and biggest claims are made by the Philippines and Vietnam, while Brunei and Malaysia claim to smaller areas.

By placing missiles China has once again shown that it is becoming the biggest military and economic rival of the United States, and the winner will be the one who controls the sea routes. China is the world’s largest importer of raw materials and exports huge quantities of goods, primarily in the United States. Beijing is trying to distance the Seventh Fleet as much as possible out of the waters of the Western Pacific because their economy depends on maritime trade that takes place in the waters controlled by the US Navy.

For the latest Chinese move, commander of the US Pacific Command Harry Harris argues that it is contrary to the promise of Beijing that it will not militarize the region. But after that the Ministry of Defense of China rang, saying that Chinese aerospace and maritime defense objects on “the relevant islands and reefs” were installed several years ago. “Paracel Islands are our territory and we have the right to deploy military objects”, the ministry stated at the end.

The International Institute for Strategic Studies, as part of the regular annual assessment, said that the Chinese military budget by 2030 could be equal to the US military budget, which would for the first time since the Cold War achieve parity between the two world powers. A rough budget parity would mean a little on the strategic plan, at least until China reaches military equality, expected much later.

The US had already militarised the region through its claim of being the world’s superpower. The US is well practised in hypocrisy.