Not surprisingly, both sides have accused the other for causing the fight, claiming that troops deliberately crossed the de facto border to provoke an incident. As yet, neither side has provided any evidence supporting its claims. However, it seems that the political and military leadership from both countries are seeking to avoid further clashes as troops have been ordered to stay away from the area where the clashes occurred.

Here are the latest developments on the India-China face-off:

The PLA and the Chinese foreign ministry, which have blamed India for the unprecedented flare-up in decades, admitted that the “fierce physical conflict” led to casualties, and have then gone into silence mode about details of the incident or casualty figures.

Zhang Shuili, spokesperson for the PLA’s Western Theatre Command, said on Tuesday the Indian side should “…strictly restrain their frontline troops and return to the correct track of dialogue and negotiations to resolve the differences.”

“The Indian troops had violated their promises and once again crossed the Line of Actual Control (LAC) for illegal activities, and deliberately provoked and attacked the Chinese forces, thus triggering fierce physical conflicts between the two sides and causing casualties,” said Zhang.

Chinese state media have followed the government in squarely blaming India for the situation without – expectedly – raising any question about the lack of details available. LINK

The US media has since quoted intelligence officials to say that 35 Chinese troops were killed in the clashes. An analysis by The Hindustan Times noted that both sides had sent reinforcements to the area following an earlier clash in May, going on to quote ‘people’ claiming that this was done by the Chinese as a calculated move to prepare for another clash without providing any corresponding speculation as to the motives behind the Indian reinforcements.

Analysts say there could be a host of reasons behind China’s massive troop build-up along the Line of Actual Control (LAC) that flared up into the first conflict between the sides in almost 45 years: from Beijing’s desire to tighten its grip on Tibet to anger over New Delhi’s rapid development of infrastructure in border areas.

Tensions between the two sides first flared up in early May following clashes between Indian and Chinese troops in the Sikkim and Ladakh sectors of the LAC.

The deployment of reinforcements by both sides led up to the “violent face-off” in Galwan Valley on Monday night that left at least 20 Indian soldiers, including a colonel, dead.

“The obvious priority for the Chinese side in Galwan Valley appears to be to move the perception of the LAC to their advantage,” said one of several people familiar with developments who spoke to HT on condition of anonymity.

This sentiment in New Delhi appears to have been vindicated as a statement in Mandarin issued by the western command of China’s People’s Liberation Army (PLA) on Tuesday said: “The sovereignty of the Galwan River Valley has always been ours.”

This is what China does, the people cited above pointed out: forcibly establish a military presence in a disputed region and then stake claim to it.

The people said China was also irked by India’s speedy development of infrastructure, especially in recent years, in strategic sections of the LAC, including in Ladakh and Arunachal Pradesh.

The people attributed the timing of the troop build-up and intrusions into the Indian side of the LAC to the preparations apparently done by the Chinese side over the winter months.

“This was a coldly calculated move and there doesn’t seem to be anything spontaneous about their actions. They prepared through the winter and acted as summer set in,” said a third person. LINK

The road that India is building through the Galwan Valley – close to the de facto border with China – is of considerable strategic significance, as it connects the border zone to an airport in the region.

Reports in the Chinese media remain scarce. Those available blame the Indian soldiers for the incident, however they also emphasize the need to return to direct negotiations to calm the situation down (India had previously rejected an offer by US president Donald Trump to mediate). Chinese news agency CGTN stated:

China’s military voiced strong dissatisfaction and opposition Tuesday to India’s provocative actions on Monday evening in the Galwan Valley region, which caused severe clashes and casualties. It urged India to go back to the right track in properly managing disputes.

“The Galwan Valley region has always been Chinese territory and the Indian border troops have seriously violated the agreements on border issues between the two countries,”said Zhang Shuili, spokesperson of the Western Theater Command of the Chinese People’s Liberation Army (PLA), in a released statement.

The provocative actions have harmed the relations of the two militaries and the feelings of the people from both countries, he said.

Citing the meeting between Chinese and Indian military officials on June 6, Zhang urged India to strictly restrain its front-line forces in the border areas and meet the Chinese side halfway… LINK The talks led by China’s Southern Xinjiang Military District chief and India’s 14 Corps commander were held in the border area on the Chinese side and ended in “positive trajectory”, The Global Times reported citing Indian media reports.

India’s Ministry of External Affairs (MEA) said in a statement Sunday that the talks were held “in a cordial and positive atmosphere” with both sides agreeing to “peacefully resolve” the situation.

“In recent weeks, India and China have maintained communications through established diplomatic and military channels to address the situation in areas along the India-China border,” it said.

At Saturday’s meeting “both sides agreed to peacefully resolve the situation in the border areas in accordance with various bilateral agreements and keeping in view the agreement between the leaders that peace and tranquility in the India-China border regions is essential for the overall development of bilateral relations,” the MEA said.

Indian public are emotional uneducated piss drinking, street shitting monkeys and don’t understand the implications of war with China that will certainly bring in Pakistan and go nuclear. The dumb dot head fucks should shut the fuck up and chill. The PLA is far superior and Chinese are rational, peaceful and disciplined people.

Excatly what happen there still there is not a clear picture

The land grabbers first invaded and annexed tibet. Then Taiwan and then Hong Kong. Now they want to invade india.

Your not clever are you,fk no! See royalty has understanding and respect to ccp,after all they are in effect ww2 allies whom liberated tawain from the jap kuntz,and the world know about soros funded anarchists in hong kong whom were out voted legit 298-1 so the law of the land comes in effect and to jail those problematic drug addicts whom impede which is the only logical solution yet there’s more so much more,but you degenerates find out!
Now there is also the fact of brics,whom unlike cia have a far stronger outlook than you!

paolinks
Reply to  Friend of Russia

Humm…Taiwan was part of China. Then Chiang Kai-Shek fleed to Taiwan and declared it independent. Hong Kong the same. The coward britons occupied it and imposed a ferocious anti-han regime. China is only recovering all its lost territories.

It’s very evident from your rants that who’s uneducated crap. Indians are one of the most ethical and bravest, when it comes to war fields. We know how to defend our land from insect eaters. No doubt PLA is far more superior but then military hardware is not the only criteria to win modern day warfare. It has been amply proven in Yemen. So dear piss drinking sh*thead pl keep shut.

A Russian guy blaming that indians are cowards!!! It’s laughable. Israel shot down your plane and killed 15 soldiers. Turkey shot down two Russian jets and killed two soldiers. How did your brave Russia retaliate on those occasions? How many enemy soldiers were killed? Nobody can surpass Russians in the matter of cowardice.

You Chinese are virussssss!!! You all looks like pigggg… your days are coming to end. HAHAHA!!

Not to inflame but Chinese brought rods and clubs. They were prepared. lol Now, what kind of result will India seek to be satisfied? 20 dead seems hard to ignore. Hacking for six hours on 20 bodies must be chilling for the soldiers. Any leader or party will be seen as weak and might lose any reelections.

The Chinese just threw some of the Indians into a deep ravine.

I think that’s worse. That was desecration of a body. If they were alive, that was cold murder for 20 bodies as opposed to be in the middle of the fray.

“Slight” violation of the Geneva Conventions…

Mr. Chineseeeee virusssss…. We have killed more than 45+ of your soldiers …Go and find their dead bodies… you all are pig and spread coronaaa virussssss. Your nation is virusssss…you coronaaa pig….

That fly kick at 0:16, no prizes for guessing which group was Chinese :)

They even stoned a downed Indian to death, Arab Sharia style. This PLA mountain unit must have spent time in Syria.

You are what you eat. Dog eaters get the character of dogs

back to stone age.

Do these retard politicans know that both China and India are part of the SCO?
What is so important aside from a few rocks and snow??

Because this could lead to a clash between two nuclear powers with all it takes. Two billion people could be wiped out in a day, and Gates would stand there with vaccines of no use.

India’s population needs to be radically controlled by the crown or other means.

i hope both sides de-escalate and instead make a deal to share the water in the himalayas, put more R&D into developing techniques to desalinate ocean water and purifying other sources of water, but if it does come to war i hope china wins

The street shitters seem not to have a clue about the Jews, as the disgusting semi-human mud men Asian-wannabe the pajeets are!
Nothing but front men of the JewSA…

I think soon there will be air battle

All this talk by the Indian morons of ‘greater Chinese soldier casualties’ & ‘brave Indian soldiers’. I spit at these lies. 1st, this claim is sourced to ANI, a right-wing media with plenty of history of lying. Second, there is no evidence whatsoever produced by these Indian morons. Third, China is the stronger force here, if there was such lopsided casualty numbers, there would be no talks. India would have been punished immediately!

Indian Army might be able to inflict serious casualties to the PLA. But the response by the PLA would be devastating to the Indian Army and the whole country. India keeps underestimating its enemies. It did that with Pakistan in 2019 and IAF got its ass whipped. China can inflict much worse pain than Pakistan. If India continues or escalates these provocations. China can and should give them a reality check burned so deep in their memory, that it’ll be a historical lesson in humility.

These Indian morons don’t know what kind of hurt China can inflict on India. Always talking about ‘bloodying the nose of China’. Well if India bloodies China’s nose, China could smash in India’s skull. China does not fight to win a battle. China fights to win a war. India talks about terrain, China talks about the battle-space.

you and your country people are slaves of PLA. HAHAH!!! 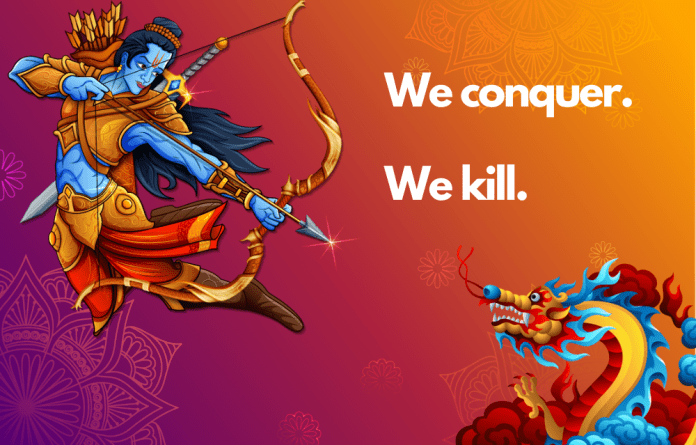 Hey!! PLA slaves… you and your country people are slaves of PLA and their gang of mafia.