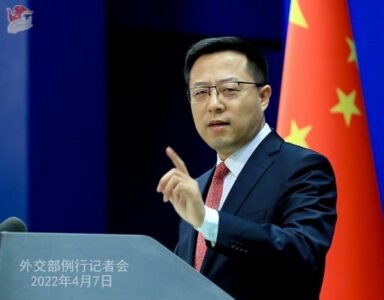 The situation around Taiwan is heating up, but the Chinese side is acting coolly. The Chinese Foreign Ministry, represented by Speaker Zhao Lijian, is cold-blooded, clear, and unwavering.

At a regular briefing on April 7, Chinese Foreign Ministry spokesperson Zhao Lijian said that the U.S. side, in particular House Speaker Nancy Pelosi, should cancel plans to visit Taiwan, but if the American side refuses, the Chinese side will take drastic measures.

Zhao Lijian stressed that China opposes official contacts between the U.S. and Taiwan and that Congress should keep in mind the principle of “one China”. Pelosi’s visit would be perceived as a violation of the Sino-US communiqué and a violation of China’s sovereignty and territorial integrity.

Zhao Lijian went on to say that the U.S. and Taiwan colluded and compared the Ukrainian issue to that of Taiwan. The speaker stressed that such comparisons are fraught with consequences.

Zhao Lijian went on to answer reporters’ questions about what would happen if China invaded the island, whether China would be sanctioned like Russia, and whether China was going to learn lessons from the Ukrainian crisis.

The spokesman replied, “There is only one China in the world, the Taiwan issue, a problem left unfinished after the civil war. Determination and will to defend sovereignty are unwavering, and any measures will be taken against foreign forces that support separatism.”

Zhao Lijian then noted that the tensions in the Taiwan Strait are related to the Taiwanese administration’s desire to gain U.S. support, and the U.S. is using Taiwan to contain China.

This briefing clearly articulates China’s position on the Taiwan issue.

China and Russia Forever. The west is decaying. They will be the backwater in the 22nd century. The new world order is before us.

They should unite in the same country with two capitals.

I make more then $12,000 a month online. It’s enough to comfortably replace my old jobs income, especially considering I only work about 11 to 12 hours a week from home. I was amazed how easy it was after I tried it . copy and open this…GOOD LUCK..____𝗪𝘄𝘄.𝑵𝑬𝑻𝑪𝑨𝑺𝑯𝟏.𝑪𝒐𝒎

They west has been dacayed for at least 2 centuries. The problem is that it was rich, so everyone turned a blind eye to the pedo monsters in the west.

The war in Ukraine is only the appetizer. The main course has always been the West’s war with China. SARS, Bird-flu, Swine-flu, and Covid-19 have been biological weapons released by the US in China. In 6-12 months the paid-off whore government in Taiwan will announce independence, then China will invade and conquer Taiwan in short order.

You should avoid that last phrase if you’re trying to convince a certain type of person.

If Nancy Pants has annoyed you, then you can have her, but you have to promise to keep her.

Nancy has shited her pants

Is Putin getting down on his knees again to suck tiny chinaman dick?

Just after u- speaking by experience?… Pedo Joe will sniff ur U-8 relatives, be careful

Someone
Reply to  Hungary Guy

putin must be laughing his balls off by now. for 0.9T$ in frozen assets he acquired a huge upgrade. crimea connected by land, plus the azovstal metalworks. use iron from Donetsk which will make back the 0.9T in no time, getting huge BRI expansion railroads and ports contracts no doubt. plenty of scrap metal being dumped there as well in the form of sovjet age tanks etc which will come in handy

once china moves and invades taiwan, north korea will invade south korea. that is automatic.

The world is begging for a peaceful solution in Ukraine ,China should be honored for its moderation and we should all be grateful for the revelation of the Globalists Bioweapons and their possible connection to the next pandemic so that it can be prevented.

Yankees, you are death.

Nancy earned millions on China deals. I already know which side she is on.

Time to nuke the USA… United Snakes of Aipac