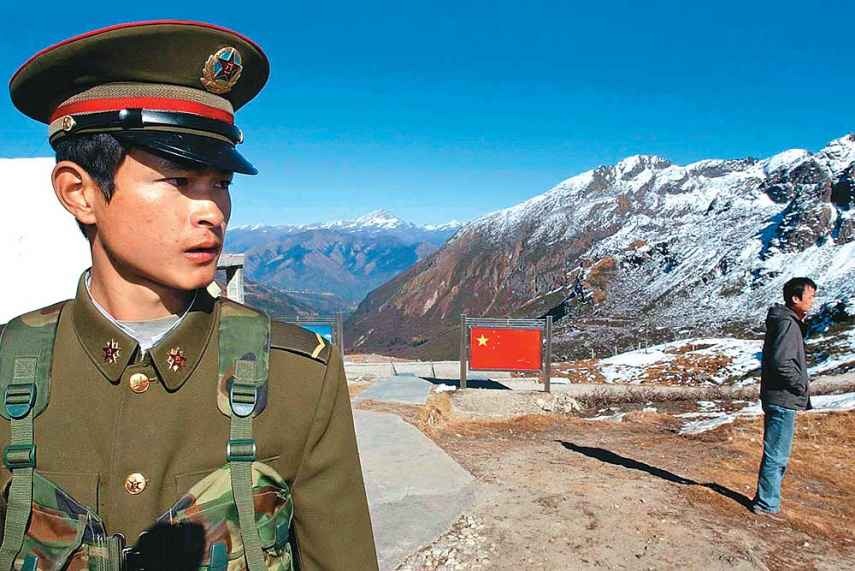 On August 15, a fight between Indian soldiers and Chinese soldiers took place in Doklam area west of the Tibet on the Chinese-Indian border, according to Indian sources.

“Indian border guards today foiled an attempt by Chinese soldiers to enter Indian territory along the banks of famous Pangong lake in Ladakh resulting in stone pelting that caused minor injuries to people on both sides,” an official source in New Delhi said.

No firearms were used in the fight. Indian soldiers formed a human chain and blocked the path of the Chinese soldiers than a fight with sticks and stones only took place, according to Indian sources.

Chunying stressed that India should respect the border line:

“We urge the Indian side to scrupulously abide by relevant agreements, protocols and rules between the two countries and earnestly respect the 1959 line of control and earnestly protect the peace and stability of the border region.”

The tension between India and China in Doklam area continue for the second month.

“The PLA will not seek to fight a ground war with Indian troops early on. Instead it will deploy aircraft and strategic missiles to paralyses Indian mountain divisions stationed in the Himalayas on the border with China,”  a Chinese source told the South China Morning Post newspaper.

India on the other hand deployed more troops to Doklam area on August 11.

“The troop level along the border with China in the Sikkim and Arunachal sectors has been increased,” an Indian official said back then.

In 1962 China went to war with India and took over the Aksai Chin area on the borders, a similar scenario is unexpected this time as the two countries become nuclear power.

Heeeeeeey…. they were supposed to wait till after wwIII to start wwIIII with sticks and stones….. d:

Mass deployment of ballistic stones would only increase tensions.

Strange timing because I have just seen one in action at Warwick castle. Actually very impressive.

What is this conflict all about ?

lol, all jokes aside…“The PLA will not seek to fight a ground war with Indian troops early on. Instead it will deploy aircraft and strategic missiles to paralyses Indian mountain divisions stationed in the Himalayas on the border with China,” a Chinese source told the South China Morning Post newspaper.

that’s a serious message/warning smh I hope it doesn’t come to this :(

China Has territorial disputes with 19 of it’s Neighbours.

The US has territorial disputes with every Country in the World.

If the Chinese can get dug in on Doklam, they can potentially cut off the entire northern territory of India in a future war, this is a dangerous move by Bejing and India should be very wary of Chinese intent.

Ma_Laoshi
Reply to  The Farney Fontenoy

If these two focus on finding reasons why they dislike and mistrust each other, well, that’s where the progress will be. Maybe it’s more productive to remember that they’re supposed to be BRICS allies, who were always going to be played against each other?

These two have a chance to, together with Russia and a couple others, change the world in their favor. Do they really want to squander that over an obscure border dispute?

The Farney Fontenoy
Reply to  Ma_Laoshi

BRICS is a non-runner, SA scuppered that, so it’s not going anywhere. Anyway, being allies, in no way means being friends, history has often shown vital interests always trump any alliance.

Ma_Laoshi
Reply to  The Farney Fontenoy

Didn’t hear before about South Africa wanting to torpedo the BRICS though I may have missed it. Why’d they want to? And how can the smallest member by far hold a veto? From what I’ve seen it was more the stealth coup in Brazil that was an upset.

I’m sure it’s beautiful in the Himalayas, but are these rocks in the middle of nowhere really a vital interest to either party compared to the BRICS economies?

The Farney Fontenoy
Reply to  Ma_Laoshi

SA’s world leading stock exchange was their vital asset, but has become much of a backwater now. Zuma has also deliberately made a mockery of the finance ministry, treating the office to a musical chairs number, like the EU, Zuma takes his cue from the international bankers, they benefit from chaos afterall, and besides, he is disgracefully corrupt, inept & hopelessly incompetent.

Blucross
Reply to  The Farney Fontenoy

“SA scuppered that…” great use of that word. Are you a published writer ?

Revi
Reply to  The Farney Fontenoy

The main reason behind this is the provocation from the right wing Indian govt. who want to be junior partner of US in Asia. India itself is riddled with many problems inside it. This conflict with China is nothing but an attempt by Indian Govt. to make “patriotic” rhetoric to shift the focus from its internal problems.

China should get out of Tibet. China has destroyed every culture that had the misfortune of being on their borders, they can never be trusted, they are god less.

“China has destroyed every culture that had the misfortune of being on their borders, they can never be trusted, they are god less.” – not lie the Yanks then ?

This is all about “The New Silk Road” – The Chinese stupidly ran in conjunction with the Pakistani government and had a deliver point on one link into Pakistani held Kashmir and basically that puts India’s nose out so then of course the Yanks and maybe the Brits add fuel to the fire.

AT the same time I would add, India and Pakistan have had clashes.

Ah well, stupid is what stupid does.