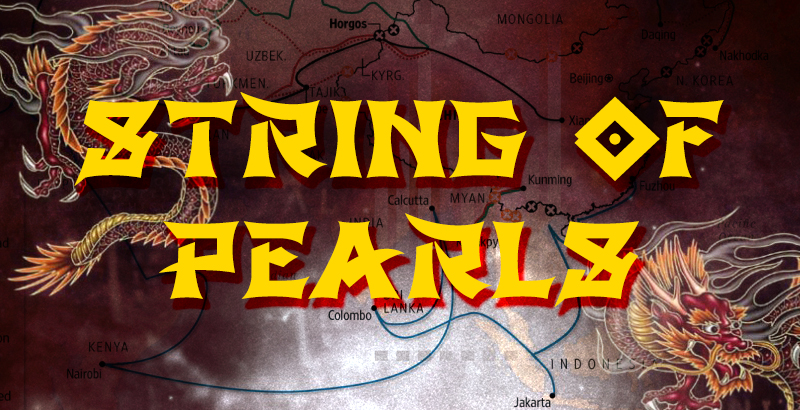 As of 2005, China’s presence in the littoral part of South Asia has become more and more evident with each passing year. Financial investments, trade deals and overall economic boosts which are taking place in many countries of the Indian Ocean Region (IOR), can be traced back to China and its enterprises. Although this comes as no surprise since China’s foreign policy is based on investment and economy in order to spread its influence, digging deeper, we can see that economic interests are only the first layer of the actual policy which Beijing is trying to implement in the IOR. The idea of the “String of Pearls” strategy became popular at the beginning of the 21st century. The strategy includes and is maintained by the use of economic, diplomatic, political and military means. By following this strategy, the dragon is trying to achieve maritime dominance in the IOR. The String of Pearls will be especially important in the 21st century since China is trying to accomplish maritime superiority, thus challenging the United States (US) and its position as a global superpower. Every “pearl” in this chain or string represents a sphere of influence which China is securing in harbours and in coastal towns along the shores of the Indian Ocean. The main point of this policy is the strategic placement of these “pearls” with one another in order to make a chain of hubs that can serve as both economic as well as military and intelligence cores in the IOR. China has already managed to establish: 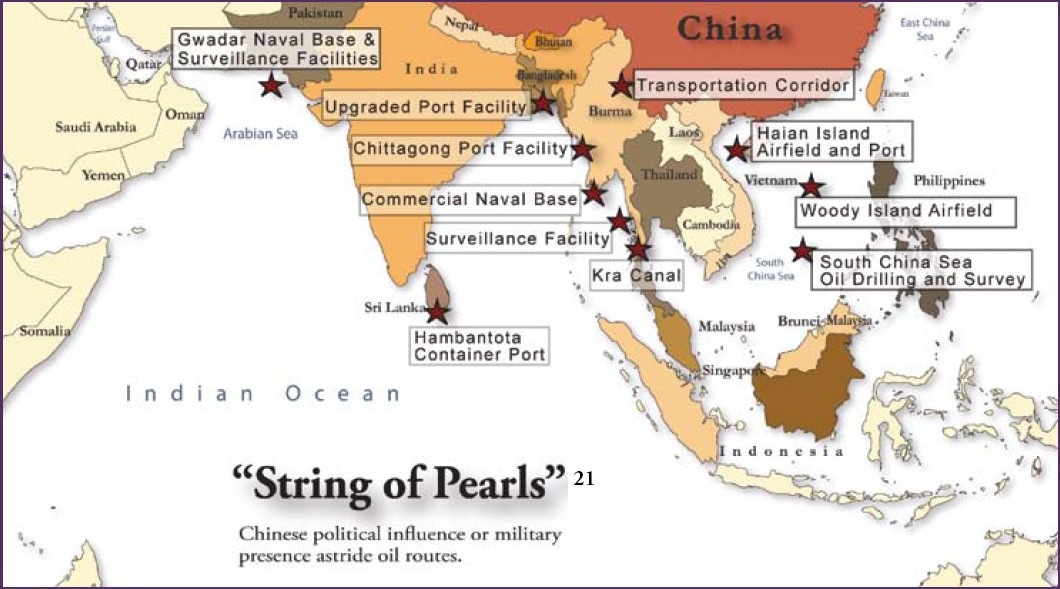 One of the core interests and goals of this strategy is to secure energy resources and their safe transport to China. According to the International Energy Agency (IEA), China managed to surpass the US in oil consumption making it the number one oil consumer in the world. Some researchers also suggest that by 2020, China’s oil consumption will reach 16% of the tradable oil on the entire global market. China’s dependency on oil is growing each year and as China moves from relative dependency to absolute dependency on oil imports, securing trading routes for this commodity will have great significance for further Chinese industrial development. Furthermore, since most of the oil is transported by ships, allowing free and unobstructed passage for these tankers will be one of the main goals of the String of Pearls strategy. Developing and maintaining sea ports along the path will allow China to have a reliable influx of oil. The development and maintenance of these shipping hubs is mostly paid for with Beijing’s money, thus China can secure its sea routes by creating economic entities which are more or less indebted to China. The partial or full ownership of ports also allows Beijing to further control its oil imports and the routes which are used for the transport of various other commodities.

Not only does this strategy provide China with a steady flow of resources but it also gives it access to new markets across littoral South Asia. Massive infrastructure projects which China is implementing in countries across the IOR are usually done using Chinese contractors. In Myanmar, infrastructure projects had employed more than 40,000 Chinese workers. Projects which China is pushing usually oblige the host country to employ and accommodate Chinese workers and Chinese firms. This cycle of constructing various buildings, roads and sea ports for the String of Pearls and then employing its own labour force is doing remarkably well for Beijing’s foreign policy, although the host countries usually become exploited one way or another despite getting benefits of modernised infrastructure. With the new strategy, China also provides social development and military assistance to countries which are crucial for the supply chain. This could be seen in Sudan where China deployed 4,000 non-uniformed troops in order to protect its assets. Furthermore, China vetoed the United Nations (UN) Security Council’s resolution against the Sudanese government, providing it with much-needed relief from international pressure (although Sudan is not a crucial part of the String of Pearls strategy, it is a country that provides oil to Chinese corporations and to the whole of China). Full control of the “pearls” is especially important because the main suppliers of oil for Chinese industries are unstable countries. A coup, insurgency or a similar event that can trigger anarchy in those states can seriously disrupt the flow of oil and that is something Beijing is not willing to accept. The social stability and development mentioned earlier was not specifically directed towards countries hosting the String of Pearls, rather it implies the further development and stability of China. Spreading its influence, especially in the economic sphere, China is securing a steady growth of its gross domestic product (GDP) and of its domestic industry. Most construction investments and projects which China is implementing are usually done using Chinese contractors and Chinese employees. Even when investing in other countries, China is creating jobs for its nation. This evolving job market has proven important for the stability of the rural regions in China, which usually provide the majority of the work force.

By securing the String of Pearls, China is also forming a type of garrote around India. India’s ambition to gain access to these shipping routes as well as to some energy-rich countries is being diminished by China with each passing year. Neutralising India as a competitor state in this region is also done through Chinese state and non-state enterprises. In fact, both kinds of corporations are closely working together to secure concessions on energy resources in order to push out any kind of competition. Plus, China’s veto power in the UN also gives it a lot of leverage when it comes to securing foreign oil in relatively unstable states with problematic governments. With these advantages which China possesses, India, as a regional power, cannot do much and its efforts to secure foreign energy are not giving it desirable results. Better planning and an exceptionally good execution of its foreign policy made Beijing a regional player which can control the littoral region of South Asia, although this foreign policy will inevitably clash with US interests, which can already be seen in the South China Sea. 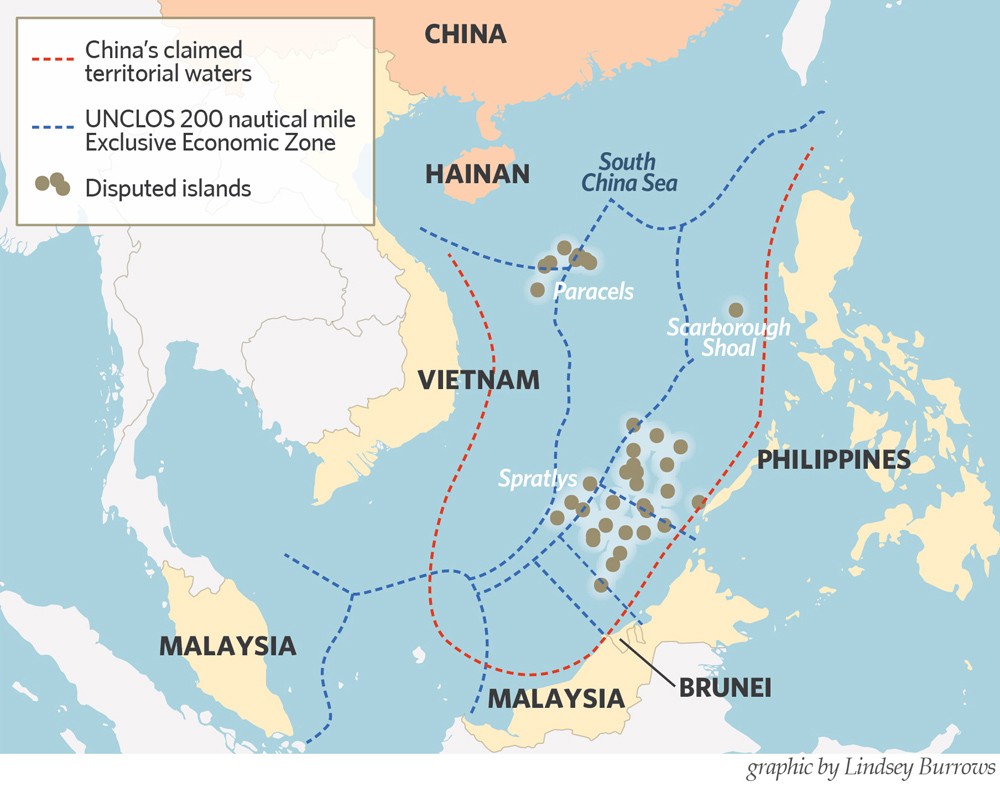 The main competitors for the IOR besides China are India and the US. Although China is trying to represent its String of Pearls strategy as an economic route, statements made by Chinese military officials such as General Zhao Nanqi stating “We can no longer accept the Indian Ocean as only an ocean of the Indians,” make Americans and Indians question the true purpose of the String of Pearls.

Historically, India has regarded the Indian Ocean as an exclusive sphere of its influence. This was similar to the Chinese view on the China Sea and the American view on Latin America. When China started to move into the Indian “backyard” of foreign influence, it was deemed to be an aggressive act aiming at the encirclement and containment of India. Blocking off trade routes, sea lanes and capturing harbours along the String of Pearls is something that India fears China can accomplish. These fears are not unfounded. Pushing its strategy of securing energy resources in the IOR and boosting its relations with Pakistan, China is effectively minimising India’s role as a regional power. Not only is India threatened in the littoral southern region, but also in the Kashmir region in the north. Recent separatist attacks and insurgency attempts by the Muslim militants in Kashmir are showing that Pakistan is feeling relatively comfortable with these actions, knowing its place in China’s “One Belt, One Road” policy. Although this is a bold move from Pakistan, it can destabilise the region. Furthermore, all of these states are nuclear-capable powers with considerable conventional forces. The fact that India has purchased more than US$12 billion in arms (80% Russian weaponry) shows how serious the situation really is.

The US shares a similar feeling as India towards Chinese expansion in the Indian Ocean. The idea of the String of Pearls challenges the US’ naval presence in the region and also threatens US allies such as the Philippines, Japan and Australia. Because of this, the US is constantly adjusting its naval forces in the region, adding new and more powerful assets that can serve as a deterrent measure. The first indications that the US felt the growing presence of China in the Indian Ocean were probably during the Bush administration in 2005. Ever since then, the US has been trying to get closer to India as it is facing the same adversary. The Australians seem to be doing the same. Since October 2012, Australia has been trying to promote trade and negotiate civil nuclear cooperation with India. The Australian government also lifted the ban on selling uranium to India and it is also proposing joint naval exercises with the Indian navy. Other nations in the region are also feeling threatened by the growing Chinese militarisation as well as its aggressive stance towards territorial disputes in the South China Sea with Vietnam, the Philippines, South Korea and Japan.

The “One Belt, One Road” policy which China is implementing is a clear sign of Beijing’s aspirations to be a superpower. The String of Pearls, which is a littoral route, will probably disrupt, challenge and upset more countries, especially the US, than the Silk Road policy, which is the land route for the “One Belt, One Road” strategy. Not only does the String of Pearls give China a safe energy, trade and shipping route, but it also allows China to station its security and intelligence forces throughout the IOR. This strategy spreads throughout the IOR and finishes in Djibouti where the Chinese government began construction of a large base, which according to some estimates, could accommodate more than 20,000 personnel. The Djibouti base will probably be the cross point for the future development of the String of Pearls. While this strategy is primarily aimed at connecting the Horn of Africa with the IOR and the South China Sea, the Djibouti hub may also allow for the development of this strategy into the Mediterranean Sea (through the Suez Canal) and further south along the African east coast reaching South Africa. Although the future seems bright for Chinese foreign policy, the further development of the String of Pearls will be determined by various factors, some of which include:

All of these factors can change over time and one of the most important ones is probably the US presidential elections coming at the end of this year. A far-reaching strategy such as the String of Pearls can seriously challenge or even diminish the US’ global naval superiority. No matter who takes the seat in the Oval Office, the US will need to respond to the rising power of the dragon accordingly.

IGOR PEJIC graduated in Political Science: Foreign Affairs Department at the Faculty of Political Science and he is now completing an MA in Terrorism, Security and Organised Crime at the University of Belgrade, Serbia.

i am not so worried about putin’s russia but china is kind of makes me worry. as i live in korea, i am really concerned whether china will become the next imperial country. as we can see from middle and south america, it is absoultly not good to be neiboughrs to the world number one power country. you know western people don’t know about asian history and culture but you need to be aware of “Sinocentrism”. you are born with this mentality it’s in their culture. it is a very similar mentality to the “choosen people idelogy”. it is an agressive, violent idea. but it’s been there for a long period of time in east asia.

Chinese are as expansionist as the USA is. US uses “Exceptionalism” rhetoric whereas Chinese see themselves as the Master Race & others as Gaijins (Barbarians).

Russia needs China to counter US presence. But others are wary of Imperialist China at their neighborhood, like they are worried about US footprint. A tiger is always feared, irrespective of its stripes.