The US Air Force is putting China on notice as it announced Friday a new deployment of three B-2 Spirit stealth bombers to Hawaii for training in the Pacific. The nuclear-capable aircraft departed Whiteman Air Force Base, Missouri, and touched down at Joint Base Pearl Harbor-Hickam in Hawaii, along with 200 support personnel airmen, as part of a U.S Strategic Command-led Bomber Task Force mission.

One defense analyst recently called the increase in B-2 bomber deployments to Hawaii “China’s nightmare, and something Beijing should get use to.” “Deploying to Hawaii enables us to showcase to a large American and international audience that the B-2 is on watch 24 hours a day, seven days a week ready to protect our country and its allies,” military spokesman Lt. Col. Joshua Dorr said in a statement. Though a Pacific Air Forces Public Affairs press release did not expressly mention China, Beijing has reacted aggressively to a number of routine US long-range flyovers in the Pacific and South China Sea regions over the past year, including “close call” incidents involving Chinese intercept attempts of US vessels passing through what China claims as its own territorial waters. “Its presence in the Hawaiian Islands stands as a testament to enhanced regional security,” the US military statement continued.

The Air Force statement further touted the B-2’s ability to “penetrate an enemy’s most sophisticated defenses,” as well as “put at risk their most valuable targets” due to its “low-observable, or stealth, characteristics”. The statement continued, “This training is crucial to maintaining our regional interoperability. It affords us the opportunity to work with our allies in joint exercises and validates our always-ready global strike capability.”

Previously, B-2 bombers were operational in Guam in support of regional allies at a moment of escalating tensions between North Korea and the US in 2017 over Pyongyang’s nuclear program. Crucially, though this latest deployment is being described as “routine” it is only the second time the B-2 Spirits have been sent to Hawaii, and in the largest numbers, after an initial training run in the Pacific in October. At the time Maj. Gen. Stephen Williams, the director of air and cyberspace operations at the Pacific Air Forces headquarters, noted the bombers “helped ensure a free and open Indo-Pacific” — language frequently used by US officials in response to China’s condemnations of the recent uptick of American operational activity near southeast Asia.

As recently as December Chinese officials issued threats against what was described as American military “meddling in China’s affairs”. For example Dai Xu –  President of the Institute of Marine Safety and Cooperation, and a PLA Air Force Colonel Commandant, recently stated:

“If the U.S. warships break into Chinese waters again, I suggest that two warships should be sent: one to stop it, and another one to ram it… In our territorial waters, we won’t allow US warships to create disturbance.”

“The US keeps meddling in China’s affairs, so why can’t China go to areas like Hawaii where the US is dominant,” he added. Xu was referring to the frequent Freedom of Navigation Operations (FONOPs) conducted by the United States in the South China Sea.

Regarding the new B-2 deployment to Hawaii, it will be interesting to see just how close the advanced nuclear-capable stealth bombers come to airspace in which Beijing has issued prior threats to US planes. Last August, for example, a US Navy P-8A Poseidon reconnaissance plane flying over the regionally disputed Spratley Islands in the South China Sea was told “Leave immediately and keep out to avoid any misunderstanding” in a series of radio communicated warnings from the Chinese military. China has also told US allied forces like the armed forces of the Philippines, “Leave immediately or you will pay”.

The dramatic inflight recording of China’s warnings during an early August 2018 incident below (starts at :50 mark):

"Leave immediately": A US Navy plane, with CNN aboard the flight, is warned over the South China Sea https://t.co/wEnvxKrGro pic.twitter.com/UB5MPX1gJj

In response to the belligerent Chinese radio communications to “leave immediately” the US crew cited that the plane was conducting lawful activities over international territory. Under international law, a country’s airspace is considered to be 12 nautical miles distant from the coastline of the nation. But Beijing has of late laid claim to more and more territory surrounding its controversial string of man-made artificial islands, and claiming further the skies above as sovereign Chinese airspace, which the US has refused to recognize.

But considering the Northrop Grumman built B-2 stealth bomber is by design extremely difficult to detect by radar, allowing it to penetrate sophisticated enemy anti-air defenses, Beijing will have to find it first.

B2’s do not have stand-off capabilities, Chinese S400 and J20’s would take care of this subsonic target.

hawaii, about 3 fifths of the way across the pacific ocean before it gets to see chine and even then it’s not likely it will get to see china. stealth on long runs, wouldn’t think so. short range quick encounters – maybe. but 1000 of miles across open sea – just ludicrous to believe that!

Comment spiked my interest so quickly looked it up – B2 bomber fuel range is listed as 6000 nautical miles on full internal tanks, and 10,000 with a single in-flight refueling from a tanker (not so stealthy exercise), meanwhile the distance from Chinese mainland to Hawaii is about 5,950 miles. Meaning, that journey is a one way flight on the B2’s internal fuel range – it requires an in-flight refueling to get there and back – SNAFU the stealth thing.

The US has used B2’s to bomb Libya from the US and Iraq from Diego Garcia.
They are designed for long range missions.

It all depends on how stealthy the B2 (and F-22) actually are. The US has not gone up against a peer power since WW2. And has struggled significantly against third world countries that received significant help from other main powers, like in Korea and Vietnam. For all its bluster the B-2 and F-22 are as untested as Russia’s S-300 and S-400 systems. And I reckon that when push comes to shove what will really determine any war is not going to be individual weapons system, but who has the best military doctrine and organization.

Assuming a conventional war, the winner will be who has the most money, real money(gold), not worthless IOU’s.

By that logic the US should have won Korea and Vietnam, because the USSR and China supporting the other side had no real money, only funny commie money. Or Nazi Germany over the USSR, as it had real Reichsmarks, and the plundered wealth of Europe.

I think its about who can mobilize its economy best, together with the most coherent strategy to win the war, and the best fighting doctrine

slow and ugly ,the HYPERsonic reply will be devastating.

Imagine if other countries exercise the same freedom of navigation with military and armed ships and airplanes between the islands of Hawaii and Maui, or Oahu and the whatitsname, and other US territories in the Pacific, all distanced more than enough for an international corridor to be there: 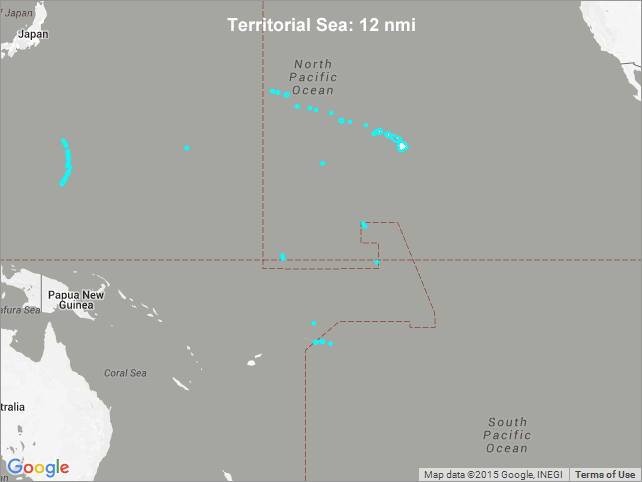 Oh, and the distance between Hawaii and China is about 8,000 kilometers. While B-2 has a range of 11,000km (at cruising speed and altitude), it needs refueling for a two way trip, which means flying behind a tanker which is not stealth (if we buy that Chinese can’t detect B-2). Unless they don’t plan on returning, going down in flames or land in Japan or something (will Japan or something participate in a US attack on China?)..
I think what they achieved by this move is to put Hawaii in the cross hair of Chinese ICBMs, if it wasn’t already.

Why the US always needs to poke it nose where it doesn’t belong? South China Sea is a matter between it’s littoral states, why can’t you leave them to sort it out?

Sure, these B-2s may be able to do some precision strikes inside China, but can they get back to base and land fast enuf? Faster than those conventional ICBMs that’s gonna destroy the air fields? LOL

Might evade radar ONCE in a surprise run. Then they will be sitting ducks and what i just said ASSUMES radar stealth . I am not totally convinced US planes even have that yet.

You gotta love American BS, they can turn a retreat into a threat.
The US usually keeps its B2’s at Diego Garcia, so it can bomb anywhere in the Middle East at any time for any reason.

However with a Chinese base in Djibouti and Iranian missiles getting increased range by the day, the US has run away to the safety of Hawaii.
Hawaii is a truly beautiful place, it’s a pity the US Navy has poisoned the water.

I dont think china cares as they have nuclear submarine ballistic missiles and ICBM pointing at america at all times.