As of August 27th, the Liaoning, China’s only commissioned aircraft carrier, is undergoing its first major revamp since it was first delivered to the Chinese Navy in 2012.

According to a report by the South China Morning Post, it’s receiving a new “island” command center. Pictures around the internet show that the radar above the carrier’s bridge is now gone, air traffic control at the island’s rear is also not there. The scaffolding around the command center suggest that there are more incoming changes.

The South China Morning Post cited Beijing-based naval expert Li Jie who claimed that the new structures are likely to be similar to those of the second Chinese aircraft carrier, the Type 001A – the first every aircraft carrier developed in China.

The Liaoning, which is a Type 001, is a refitted Admiral Kuznetsov-class aircraft carrier, which was bought from Ukraine. The Type 001A, which is highly modified version of the Type 001, is built in the Dalian shipyard, which is next to where the Lianing is anchored.

The Type 001A has an air traffic control tower which is smaller than the Liaoning’s and the entire island area is also taller and narrower. This leaves more space on the flight deck for aircraft operations. The tower windows are also significantly bigger than those on the Liaoning, providing a broader view. The South China Morning Post reported that the Liaoning’s old air traffic control tower had much smaller windows, which obstructed the view, affecting command over take-offs and landings.

The radar may also be replaced with a new, more advanced one, similar to the one the Type 001A is getting.

The Liaoning is the command for the aircraft carrier strike group. According to Li, however, that may be temporary, and it is possible that the Type 055 guided-missile destroyer, which passed its first trials on August 24th, could also become the strike group’s flagship when it is combat ready. “The Type 055 is designed with a more advanced telecommunications and electronics system, and better maneuverability,” Li said.

According to the South China Morning Post, with the Liaoning in scaffolding and the new aircraft carrier undergoing trials, the Chinese Navy may be faced with months or even an entire year without an aircraft carrier. This would also supposedly affect the training of aircraft carrier staff, who will need to be trained on land. “China is still on the way to increasing its number of aircraft carriers,” Li said. “When there are more than three they won’t have this problem.” The Type 001A is said to be ready for commissioning in about one year. It will reportedly take such a short time, due to the knowledge Chinese engineers have gained by working on the Type 001 Liaoning. Work on the third Chinese aircraft carrier, which will have a hi-tech launch system also reportedly began at a Shanghai shipyard last year.

All of these developments happen during growing tensions between the US Navy and the People’s Liberation Army’s navy, particularly in and around the South China Sea.

Wbur reported that in June, in a meeting between Secretary of Defense Jim Mattis and Chinese President Xi Jinping, the Chinese leader reportedly said his country would not yield “one inch” in the South China Sea.

According to the Financial Times, the meeting was meant for Mattis to deliver a “medium tough” warning to the Chinese leader that the U.S. is not happy about Beijing’s militarization of several artificial islands in the region.

China has competing claims with its maritime neighbors over several island chains in the South China Sea and the East China Sea.

Interesting. I didn’t expect such a major refit.

China now has a couple of “unsinkable” air craft carriers (those very islands) in the contested area.

Now why would the Phillipines do this ?: 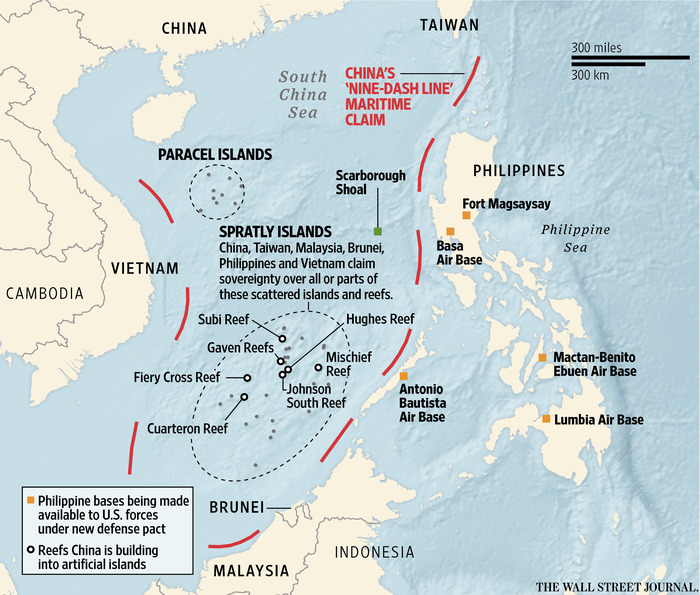 So some gimp states “the US is not happy about Beijing’s militarisation of several artificial islands in the region”……….

Bloody boo-hoo, your arrogant Yanker gits – who do you think you are ?; the World is not happy that you a-holes are coursing deaths and suffering to millions throughout 3 or even 4 continents (if you include your own shit hole).

“the U.S. is not happy about Beijing’s militarization of several artificial islands in the region.”

Fuck the Muricanz. Who cares what those cunts want or think?