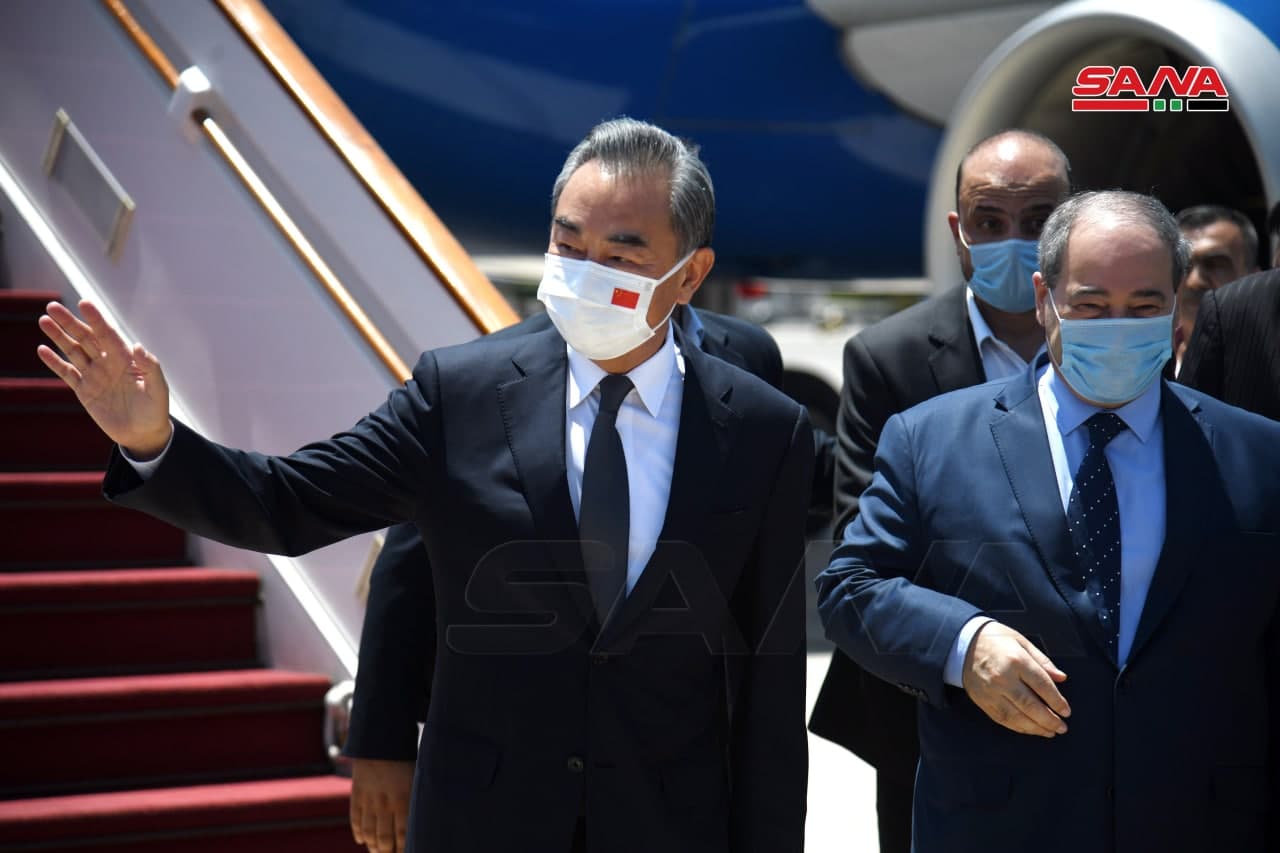 On July 17, China’s Foreign Minister Wang Yi arrived in the Syrian capital Damascus on a pre-planned visit. Yi is the most senior Chinese official to visit Syria since the outbreak of the war in the country in 2011.

The Chinese minister was welcomed in Damascus International Airport by his Syrian counterpart Faisal Mekdad and a delegation of senior officials. 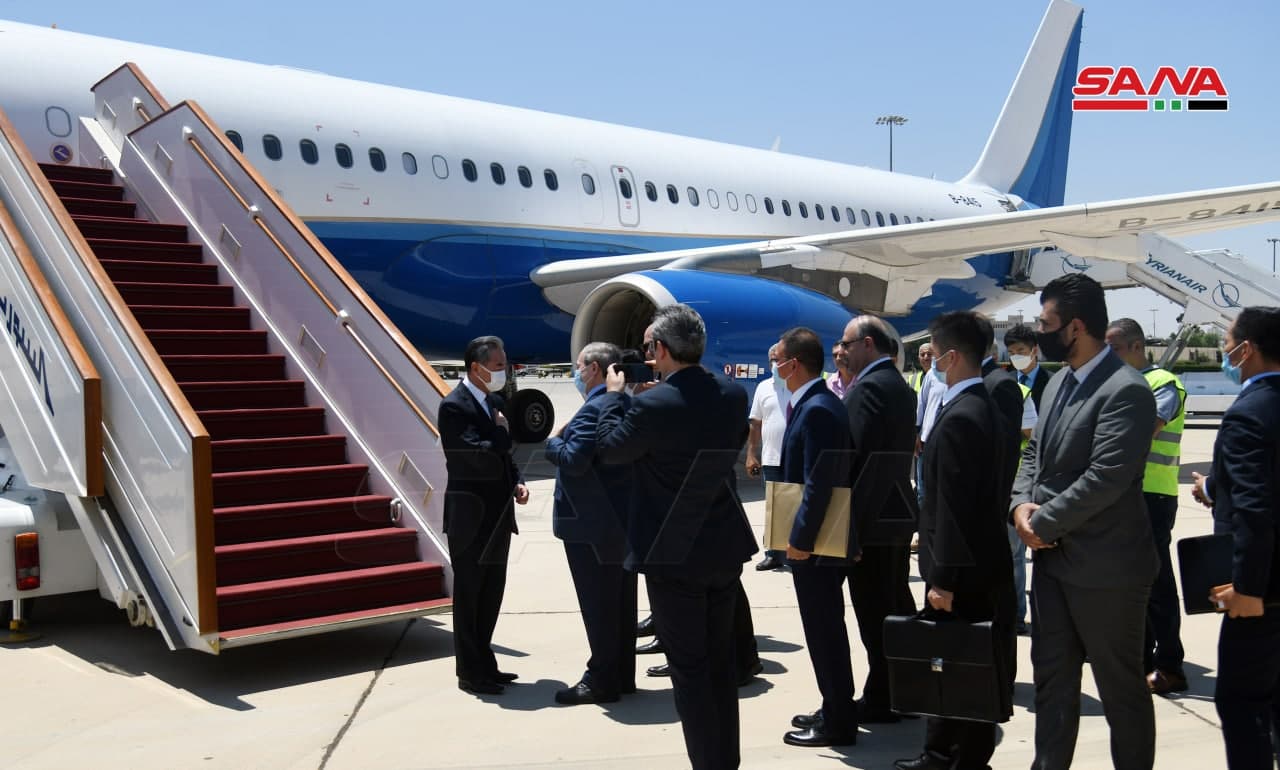 During the visit, Yi will meet with Syria’s top officials, including President Bashar al-Assad who was just sworn in for a fourth term in office.

According to a recent report by Sputnik, the Chinese minister will discuss several economic and diplomatic issues with the Syrian side. Yi’s visit is supposed to launch a “new stage of cooperation” between China and Syria.

Six strategic projects, which were pre-agreed upon, will be launched during the visit. The projects are a part of China’s Belt and Road Initiative.

The landmark visit came following reports of Chinese military support for the Syrian Arab Army. According to some sources, Beijing wants to cooperate with Damascus against Uyghurs terrorists based in the northwestern Syrian region of Greater Idlib.

China appears to be preparing to boost its support for Damascus to address security concerns and secure its interests in the Middle East.

I feel a strong disturbence in “Dark Side of the Force”.

China is the only real SUPERPOWER left and it is a peaceful stabilizing force against US and Zionist fanned wars and terrorism. CIA is training Uighur terrorists in Syria and Afghanistan, so China has to support governments like Russia, Iran and Syria that are fighting US terrorism.

China has been the greatest beneficiary of the suicidal and depleting US endless lost wars in the middle east. China would love to have US spend more blood and money for a lost cause while its economy and power grow. The Jews have destroyed America.

Fog of War
Reply to  Jimmy

A superpower imposes sanctions not tries to avoid them.

Well, looks like China enters the weapons test area to test out their newest inventions. Will see how long US troops can stand it.

Not a reliable source? Yet you’re here 24x7x365 trying to flood your propaganda…

I hear you can only breath with the help of an Iron Lung. Certainly not enough intelligence to do it on your own.

Another paid for comment that isn’t worth a penny but that is not the point of it , is it , numnut.

China operates by soft power and economic development initiatives globally and that is why it is accepted. The Chinese are also hard working and humble people who do not alienate others.

Good. China should sell many weapons and tanks and planes to Syria.

Brokenspine66
Reply to  "Israel" is a terrorist European settler colony

No they don’t need to sell them any weapons…no need, enough for two or three wars floating around but they are helping them with much more dangerous support like reconstruction of country infrastructure + economy and the west will be completely left in the cold, bare of any influence but they have REAL friends like Russia China and Iran.

Pakistan is the only country out of those that exists. Kazakhstan , Kyrgyzstan , Uzbekistan ,Mongolia and Turkey are the others that I think you are trying to say. You should go to them and then you might be able to spell them properly. Before you say anything find out where Ust-Kamenogorsk is .. Dumfuk

Oww jens , you do miss me don’t you. I can feel the love in your heart as you give me your downvote. Thanks..

The Jews will be scurrying off to Beijing in outrage.

They’ll have to bend the knee to Xi Jinping if they want to have any say in Syrian affairs.

That is the most intelligent thing you have said all week. That doesn’t mean it has any cerebral input which of course it doesn’t but compared to what else you have said . Even Einstein couldn’t work out what it is suppose to say but hey keep trying as afterall you are very trying..

Comon jens you can do better than just give me a downvote which from you is like getting a gold medal , so thanks for that. Your opportunity to make another paid for comment and you passed it up. You must be rolling in it. Rolling in your fecal material that is.

Xi is taller than you, smallpenisjens:

Good thing is that China doesn’t have any Jews living in their territory. They just don’t understand Jews and their exceptionalism and chosen people and all that sort of stuff. It is a cultural thing. China is engrained with egalitarianism and is founded on it.

Judaism is a religion not an ethnic group.

There are ‘Jews’ living happily in the blackest Africa.

And Indians who call themselves jew.

But there are no White, Euroslavic Jews in China that have been there since the 8th century.

No khazars have integrated into China because they are fundamentally alien to that culture.

For that matter, Muslims have been established in China longer than the Jew.

Not only that, but Muslims hold a large representation in the Chinese government.

Actually, Judaism is a religion FOR the Jews and the Jews alone. There is no conversion to Judaism strictly speaking so Judaism can indeed be conflated with the “Jewish” ethnicity. It is this very fact, that the fake Jews (Converts) used to convince the rest of the world that Palestine belongs to them

From that moment on, Syria won the war.

If China really wants to piss washingtub off. What better way than to assist the fight against US and nato terrorism in the middle eastern region. Maybe the US will need those grunts in Afghanistan and could be the reason why they ‘vacated’.

China’s involvement will mean testing lots of new Chinese weapons and ridding the land of lazy parasites who would rather kill and steal than work at a honest job.

Bring it on asap. Syria needs the oil and their borders restored.

Fake news… China is allies with Turkey never forget this

China works with anyone who will work with it.

For some reason people misinterpret this as ‘allegiance’ .

China only came for Economical reasons.. They are not fools enough to upset Turkey and her allies which China in return has better relations than weak Syria

The only Youghurt here is you brain , or what is left of it after amoeba have spent the last 20 years eating most of it.

We’re back in BUSINESS!

I have heard this before and nothing came of it,but its what is needed to combat the Reich,they should send troops and aircraft and fight alongside Russia,that would send a message to the Reich that their days of diktat are over.

Chinese soldiers and command hasnt been in a war for ages, hope they learn quickly in the Syrian war “swamp”…