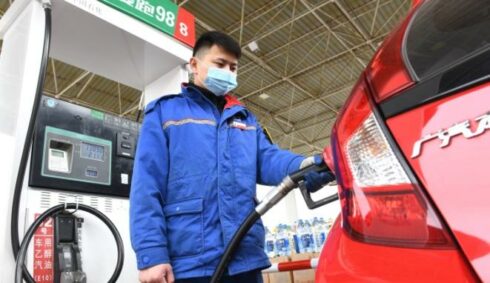 There is one recurring problem with central planning: the greater the level of intervention, the worse and more widespread the unexpected adverse consequences. Just two days ago, when we reported that Beijing had imposed price controls on its coal rationing, we said that the problem with such explicit subsidies which create an artificially low price, is that they don’t address the underlying problem (too much demand, not enough supply), but instead accelerate hoarding and lead to a run on the artificially underpriced commodity, forcing spikes in another energy commodity while resulting in an even faster drain of the commodity in question, in this case coal. In essence, it’s like a giant geopolitical game of “whack a mole”.

Well, as we anticipated, in China’s attempts to defy the laws of supply and demand when it comes to coal, the world’s second-largest economy may have set its people up to relive one of the worst aspects of the 1970s stagflationary wave: gas shortages that have left many gas stations across the country running out of diesel due to supply constraints caused by the surging demand for subsidized coal.

Weeks ago, as China’s energy crisis was first unfolding, analysts at Goldman showed a map disclosing the intensity of shortages across China: 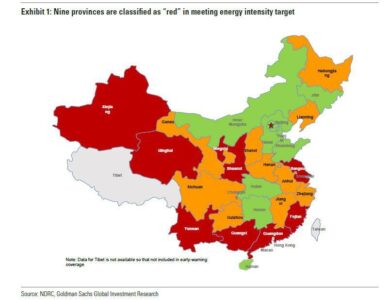 Unsurprisingly, as the Chinese economy aggressively reopened from the covid shutdown and as the supply of fossil fuels become scarce amid China’s “green” crackdown and supply bottlenecks, demand for thermal power soared to an all time high. 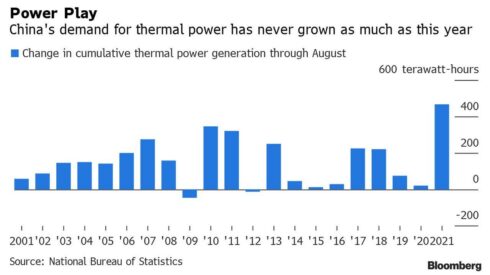 But while Beijing has sought to conserve coal, diesel and other critical fossil fuels, consumers and gas stations in China’s Hebei Province have been left to deal with the brunt of the shortage. One told the Global Times on Friday that they had been “struggling with empty pumps for days and even a week” as a result of supply constraints posed by the booming demand for coal transportation and factories using diesel to generate electricity. And when there is gas to sell, gas station owners face heavy pressure to ration their gasoline.

Here’s more from the Global Times

Several gas stations in North China’s Hebei Province told the Global Times on Friday that pumps had been empty from days to even a week. Those who have just acquired supplies face a limited amount of diesel delivery to each customer, in addition to charging them a higher price.

“Each customer can only buy a fixed amount, because there isn’t enough at the moment,” an employee from a gas station in Shijiazhuang, capital of Hebei, told the Global Times on Friday. Staff from another gas station said that the diesel price had increased in recent days by 0.2 yuan ($0.03) to 7.22, but they cannot say if the price will continue to rise or there will be any diesel available in the near future.

“The diesel price hike is driven by demand for the booming transportation of bulk cargo, especially coal, which has now entered a peak season, while some factories have also increased their use of diesel to generate electricity to complete orders amid tight power supplies,” Han Xiaoping, chief analyst at energy industry website china5e.com, told the Global Times on Friday.

Since China relies on imports for 70% of its crude oil, the country’s energy market is particularly vulnerable to exogenous supply shocks that can ripple across the entire Chinese economy, creating gas lines straight from 1970s America.

The good news, according to Han Xiaoping, chief analyst at Chinese energy industry website china5e.com, is that while gasoline may be scarce, at the very least China will make it through what’s expected to be a cold winter. “The tight situation is expected to be a temporary one that will be largely eased after the heating season this winter,” Han said.

Sadly, the Chinese won’t be alone in that. As for the crisis energy crisis being “transitory” just ask central bankers how similar predictions have played out.

Please ask Iran and Iran will sell/send you more oil for the reduced price. Send your battle ships to protect your and iranian oil tankers from USA piracy…

Israel is a NATO colonial project

There is no “crisis”. There is plenty of oil and diesel for sale in Iran.

So the energy crisis is just in petrol? What about the pipeline from Russia? Or, could this be just a play to force users to electric cars

The writer obviously wants to increase prices so that only the rich can afford to buy coal and the poor can freeze.

China lacking coal? That’s a big joke. Also, Chinese doesn’t drive diesel engine cars. Nor Iranians, nor Russians, nor Americans, nor Japanese. First to apply a diesel aggregate to a luxury car was Mercedes Benz, back in the days. Only trucks, and heavy machines uses diesel for various purposes, for example it doesn’t needs to go fast, and to have a loads of nm in low rpms. That’s what diesel engines are for.

China’s energy problems largely derive from massive floods in coal producing regions , storms that reduced coal delivery from Indonesia and boycott of racist Australian coal. in the past week import of Russian coal has tripled. this temporary and is better solved with central planning