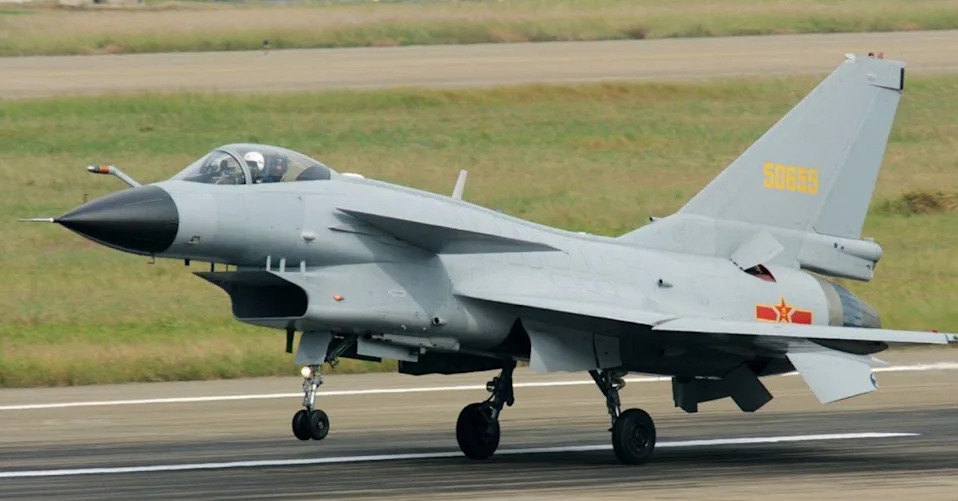 ICYMI, this photo published on the website of China’s state radio broadcaster is confirmation the Chengdu J-10C powered by the indigenous WS-10B turbofan is in PLAAF service, suggesting China has sufficient confidence in the engine to use it on single-engined types pic.twitter.com/NHGkxVeQWV

Images posted by China National Radio of a PLAAF live-firing exercise at an unspecified location show J-10C Vigorous Dragons with the distinctive exhaust nozzles of the WS-10B Taihang turbofan engine, marking the first time the WS-10 has been officially seen on an operational J-10.

The confirmation of J-10s powered by an indigenous engine represents a key milestone for China’s aviation industry, and it suggests China is now satisfied by the performance and reliability of the WS-10.

China has been testing the engine on the J-10 since at least 2011, with the engine seen on J-10B and J-10C test bed aircraft belonging to the Chengdu Aircraft Industry Group, although the engines were not seen on production aircraft until the fourth production batch of J-10Cs in 2019.

China has had troubles with the design and manufacture of fighter engines over the past decade or so. Despite having used the WS-10 to power the twin-engine Shenyang J-11 and J-16 jets since around 2010, the country has continued to use imported Russian AL-31 engines to power the Shenyang J-15 carrier-borne fighter and earlier batches of J-10s.

China is also continuing work on indigenous engines, with a J-10B test bed version fitted with a stealthy, thrust-vectoring WS-10B performing at the 2018 Zhuhai Airshow. It is also developing the WS-15 engine for its stealthy Chengdu J-20 Mighty Dragon and the WS-10 high-bypass turbofan for its Xi’an Y-20 airlifter.

Beijing continues developing its military capability in every possible direction, be it hypersonics, submarines, surface warships, ground forces and every other potential field of contention with the United States.

Its modernization efforts appear to be paying off, unlike the Pentagon’s modernization plan which, according to recent reports is so bad that it threatens to put Washington on the back foot by the middle of the 2020s.

The Pentagon has no modernisation plan, just a money making plan.

The have no plans because their old stuff actually works.

But You are wrong too. Its very expensive to renew things and steps step by step is taken.

Tests says the F35 in its best version is better then the Russian “35”. Armata seemes not as good as the Leopard as well as the new Abrams. In that You also has to add the many teh USA forces haves. Quantity cunts too.

Sure its about money too. F35 is a very good very bad example for waste worst of its kind.

Their old stuff actually works? Tell it to the crew of the Tico class cruiser Vella Gulf who have had to return three times to base for repairs, this last time towed back. Or to the crews of B1B bombers, the majority of the fleet grounded because of maintainance issues. Or, to the crews of the Minuteman Missile complexes, when they’re not smoking crack from boredom, who have been operating the same high maintainance ICBM’s for two generations and just saw a test flight cancelled because the engine signaled failure before launch. One Los Angeles class submarine has been in maintainance cycle for five years after having to return to port in 2015 due to engine trouble. In fact, USNI just had a report last month stating a major problem for the U.S. Navy is the fact that shipyards can’t keep up with maintainance backlogs because they’re old and and need of refit and repair. But they can’t be taken offline for refit because they have such huge maintainance backlogs.

And the F-35 is a lemon that can’t fly at supersonic speeds without breaking it’s engines. And the “new” Littoral Combat Ships still don’t have mission modules and often have to be towed back to port because of engine troubles. The Freedom type of the variant has halted production because the drive shafts have a broken design that needs remodeled, and the Navy is arguing with Congress about already needing to de-commission the first four units after only a decade of service. Face it Jens, the USA is wearing equipment and crews down trying to be everywhere and do everything. It’s called overextension and it happens to every empire, eventually. If your country is basing it’s security decisions and posture on the belief that the USA is going to be around to fight Denmark’s battles for it (Europe too, generally) than you’re in for some bad news by no later than 2040 and maybe as soon as 2025.

Which Russian “35?” The Mig-35 or the Su-35? Because the F-35 is better than the Su-35 on the first sortie but far inferior to the Mig-35 on any sortie. And by the third sortie the Su-35 wins out too because all the surviving F-35’s are back in the hanger, in maintainance backlog.

This development should allow China to rapidly increasethe number of Combat jets it has in service and its pilot training programs in real aircraft. Also sustainability in a real and long Air War.

Sorry, I dont like cunts they are very scary. we Danes are Holmosexual