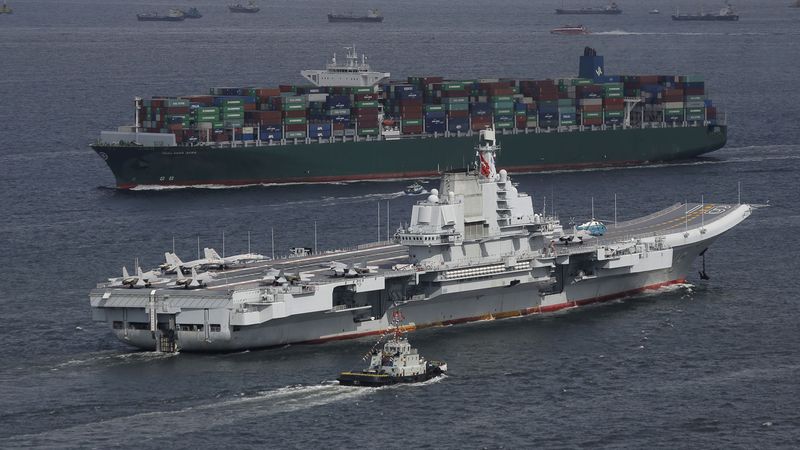 On April 5, China launched an unprecedented in its dimension naval military drills in the South China Sea.

The exercises involved the Liaoning aircraft carrier and more than 40 vessels from the North, East and South Sea fleets, which China’s military muscle.

“China wants to show the outside world its determination to defend the fruits of its economic reforms over the past 40 years,” Chinese military analyst Zhou Chenming commented on the situation, according to “South China Morning Post”.

Chinese military spokesman Ren Guoqiang confirmed that the aircraft carrier would lead large-scale naval drills, but that was “routine” exercises of China’s “defensive” military policy and those activities posed no threat to other countries.

“Like the US, China’s military might is one of the government’s political tools to protect the country’s national interests”, Zhou Chenming emphasized.

Beijing deployed naval forces in response to the US increasing military cooperation with rival claimants, including Vietnam and the Philippines.

Currently, the USA have sent three aircraft carrier battle groups to the Asia-Pacific region. The USS Theodore Roosevelt group arrived in Singapore on April 2 after a deployment in the Middle East. It is likely to conduct drills with two US 7th Fleet carrier groups — centered on the USS Ronald Reagan and USS Carl Vinson — as it passes through the disputed waterways.

China considers the South China Sea as its own territory, claiming and demonstrating its readiness to challenge American tries to limit the influence and projects in the region.

Washington worries about the Chinese construction of military facilities at the artificial islands in the South China Sea. Thus, it can become a large anti-access and area-denial (A2AD) exclusion zone challenging the global dominance of the US Navy.

About 90% of the South China Sea has been declared sovereign territory by China under its arbitrary “Nine Dash Line”, extending some 2000km from its mainland. Vietnam, the Philippines, Malaysia and Brunei also have claims in the area. The US also challenges the Chinese claims and supports its competitors.

The military race comes as contraction rises between Beijing and Washington over a looming trade tariff “war”.

On April 3, Washington published a list of 1,333 Chinese imports with worth about $50 billion, for punitive tariffs of 25%.

On April 5, the US President Donald Trump stated the readiness to increase the tariffs up to $100 billion.

On April 6, China promised to respond with the same measures to the USA. Gao Feng, spokesperson of China’s Ministry of Commerce affirmed that Beijing would fight “at any cost” and take “comprehensive countermeasures” if the United States continues its unilateral, protectionist practices.

The growing military and economic race between China and the USA could indicate that Washington perceives Beijing as a serious competitor.

The huge irony is that China’s progress has been built on US companies outsourcing work to the East to take advantage of the cheap labour: the Orange Clown Loudmouth is placing sanctions on the investments of his own financial elites !!!!! The real problem, which US sees clearly, is that China has outgrown the cheap labour stage: 2017 China filed 225 patents while the US filed 91. While China makes progress & exports economic products, the rapidly declining US exports mainly weapons, wars, death & destruction. John Doran.

Absolutely correct . The Americans don’t want to sleep in the bed they made . They completely underestimate every opponent they face , militarily , or commercially . They can’t come to grips with the fact that their sphere of influence has largely diminished , while Russia and China have seriously raised their profiles in the world power stakes .

Bravo Sir, absolutely spot on, but I would add O&G along with the military complex.

But since I am in that business – for me the biggest thing is Water …but no one seems to take that seriously.

Thanks. Dr. PCR mentions Israehell’s need for the waters of South Lebanon: http://www.paulcraigroberts.org

Nice comment, but I went on that link and I just seem to get an index.

I can’t supply a specific ref, I’m sorry. I’ve been reading him for years: he was part of President Reagan’s Treasury. He’s blunt, honest, very knowledgable, but pessimistic. He’s the only commentator who mentions Lebanon’s water as a motivation for Israehell’s aggression, so far as I know.

Water, water, everywhere and not a drop to drink.

I am a big advocator of the water wars as well, I’ll check this guys site out again. Cheers.

And Japanese, Korean, European, Australian, Canadian etc etc companies too. It was hardly the US alone. If the US hadn’t made that move it would have been left behind. The real reason the US is in the position it is in now is because they gambled on copyrights and services over production in the Clinton area and couldn’t get back after that. This becomes very obvious when you see that no country with an economy comparable to the US has these massive deficits. Germany for example makes a cool $40-60 billion on trade with China each year. But Germany focussed on production in the same years when the US really went for copyrights and services.

The blonde aryan pussygrabber want another taxes on chinese product in amount of 100 billion dollars. Interesting.

Trump uses the presidency just like as he did business with the Zionist mafia,threats,extortion, blackmail, and then outright murder and violence. But he is messing with the wrong people in China and Russia.

We (US) can never win this war. I sit here to write this wearing NOTHING made in the US. My watch, my clothes, my phone, my cap, my shoes are imported. I sit in a chair made in China, drinking from an imported coffee cup. Most of my computer is foreign and I carried it here in a backpack that believe it or not isn’t American made. Half the food I buy is imported from Mexico. The only thing we export is the US $Ponzi note. When this trade war gets in full swing and China dumps theirs US “treasuries” we can export fire $tarter. The sanctions ultimately helped Russia making them independent and stronger. Here in the US if it crashes we will be eating each other, probably literally.

The Corporation known as the United States doesn’t give a RIP about law. Once you become Liability…..you are removed. Competition is not tolerated. US warned China to change their economy from production to consumer, Which means Jeckyl Island Federal Reserve ….Debt** Consumer economy.

1871… the date. You are going a little deep for our Pavlovian society… and that was the model before. Saddam and Qaddafi jumped the gun on economic rebellion. The BRICS group have nuclear weapons and fabulous defense capabilities. I think we are living in the twilight of empire. It’s going to be messy. Russia’s involvement in Syria was a sea change event of monumental proportions.

Russ,…..Syria was already partitioned before Putin stepped in fall of 2015. Russia did not secure Syria’s borders. .. The writing was on the wall that soon. I’d wager Putin cut a deal with old Empire Sykes Picot and Corporation USA. Putin will not put a missile up Israel’s ass… IAF pounce on Hezbollah and SAA 6 years….Putin/Lavrov. …silent** Putin’s beholding to Powerful Jewish Oligarchs seat him in power. It’s all becoming a red flag.

It’s a Corporate world… which is gutted by BIS/Rothschilds Central Bank system. I feel sorry for a Iran……they are screwed and made to grovel They have on their own made amazing strides despite the knife in the back.

China is getting hammered with 50 -100 Billion Tariffs loss vs Jeckyl Island Federal Reserve print money out of thin air.

Corporation world is vicious. .. In Ancient times. ..Kings marched out upon entire regions to smash competition and instill fear. Persia discovered you could indeed seek to far….and was bested by City State Greece.

US and NATO may fall to same outcome by attacking homelands which Have Resolve, …And slaughter them to a man.

Yes I get all that, but the script is changing. The greater Israel Project has been 100 years in the making and $trillions invested… and I know Bauer/Rothschild’s statement of the control of money, but I think the game is unraveling, not because of “some good dudes” in back rooms but because like any Ponzi scheme it has come undone. If one word is to be used to define the collapse of the Zionist IMF empire it is unsustainable. People like Putin, Erdogan, and Duterte are just waiting for a chance to turn against the NWO.

Keep living in a failing dream of empire they all fall and seem to never really recover. People like you are of the bygone era and fast becoming relics of a past , hope you realize the bounce will be huge and political aftermath will change the power in the World as it already has started. The Mythos of the “Mighty Empires” are just illusory and always have a demise that changes the shift in influence and control. The retaliatory tariffs have already dropped the Dow Jones and once the Chinese Tariffs on US goods come in you will see a sell off panic and a weakened US economy.

Have yourself a nice day!

China needs to boot Rothschilds Central Bank system out. Kick out all US Auto dealers Terminate all contracts with Wall mart.

US can then turn Wall marts into FEMA detention camps : )

this is in the light of declining US military. ever since their last hurrah in desert storm where their cold war military smash third rate iraqi military in a display of overwhelming imbalance of power.

now US military are focused on COIN light infantry supported by airpower and cannot mass en ugh man power in real war because majority of them are stuck in hundreds of covert and overt bases and listening posts all over the world..

now US want to open another front. , an economic overt warfare against the biggest economy in the world that is china.. yes , china is the biggest eclipsing the US because US is decaying society full of unemployed welfare ridden citizen..

even a child would instantly understand the situation and the future disaster waiting for US if they antagonize a united russia and china..

America is in a decline and it cannot accept that fact peacefully , it will be destroyed by its own arrogance..

a salvo of nuclear loaded cruise missiles to CONUS , launched from submarines , from civilian container ships , will be undetectable until it is too late..

then again , it already been written in the bible , that the strongest nation in the world , the hammer of the earth , will suddenly be destroyed in surprise attack by a nation from the far north.. book of revelation depicted that the destruction of america will be in just one hour..