China has slammed what it calls the United States flexing its muscles in the South China Sea to try to provoke tensions and conflict among countries of the region. But the Pentagon has called the maneuvers by two supercarriers sent to the region days ago, namely the USS Ronald Reagan and USS Nimitz, an act of standing up “for the right of all nations to fly, sail and operate wherever international law allows” and further as a “symbol of resolve”.

Each carrier has 90 or more aircraft and about 6,000 personnel, making it a significant display of force off China’s coast. Given this, the People’s Liberation Army (PLA) is said to be tracking their movements closely, with Chinese vessels said to be within eyesight of the US carriers.

The carriers have been conducting flight drills since exercises commenced on July 4. Nimitz commander Rear Admiral James Kirk told reporters in a telephone interview: “They have seen us and we have seen them” – in reference to a nearby Chinese flotilla. Aircraft carrier USS Ronald Reagan is one of two currently operating in the South China Sea.

Interestingly, the US Navy and Chinese state-run newspaper Global Times had an exchange this weekend after on Sunday GT issued a veiled threat hyping Beijing’s advanced missile arsenal. China has a wide selection of anti-aircraft carrier weapons like DF-21D and DF-26 “aircraft carrier killer” missiles, the state-run paper said.

It then said any aircraft carrier movement in the region “is at the pleasure of PLA”.

“And yet, there they are,” the Navy Chief of Information Twitter account posted, saying the US ships “are not intimidated” because their exercises and navigation are “at our discretion”.

And yet, there they are. Two @USNavy aircraft carriers operating in the international waters of the South China Sea. #USSNimitz & #USSRonaldReagan are not intimidated #AtOurDiscretion https://t.co/QGTggRjOul

The carriers are holding some of the Navy’s largest exercises in recent years in the area, which is frequently beset upon by American destroyers sailing within 12 miles of certain islands developed by China that are the subject of competing international claims.

The exercises also involve four other warships as well, along with round-the-clock fights and missions.

Without a shadow of a doubt, China can fuck the dumbass Americunts to kingdom come in matter of hours. Americunts have never won a war even against the weakest nations, let alone superpower China. Why do you think the Indians sensibly deescalated fast?

aircraft carriers are such old technology

Sitting ducks and the easiest way to lose over 3,000 sailors in one go by a half a million dollar missile.

How may missiles would you have to send through to ensure the missile salvo certainly kills the carrier? If you don’t get it in one hit doesn’t the carrier have time to send back their own missiles and take out your cities or bases?

One missile would probably make it non operational. Depending where it hit. Would be hard to sink though as it has multiple bulkheads

Can’t use navy frogmen to do rudder surreptitiously? How could they sense them swimming in the water ? Hydrophones? Electrical field detectors? 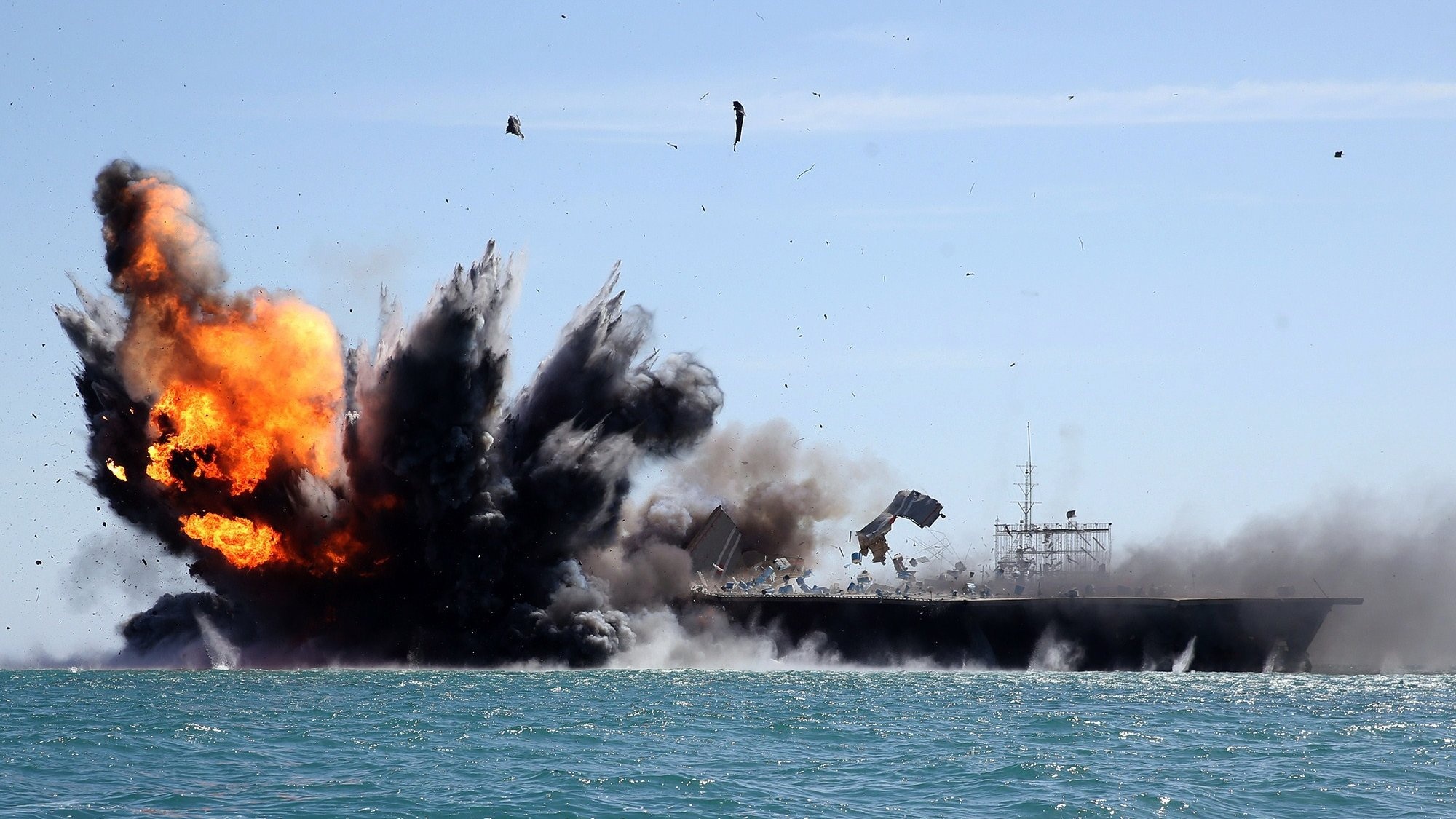 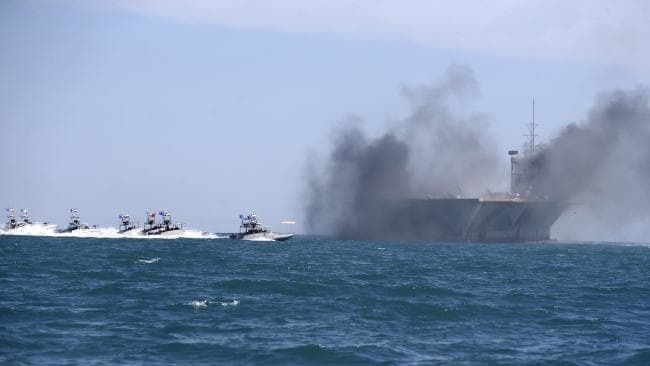 As long as you knock out both the firing ability of the missiles and take -off ability of the planes from the carrier i suppose you can let them starve afloat on the sea till they are picked off.

Depends on which part of the carrier. If its hit the second deck where ammo is stored one missile is enough. In all latest Iranian mock carrier exercises they have been using 4 missiles with 360 degree coverage and with a 500 kilo warhead and that will sink anything.

Sounds lethayl. I’m used to 2wIi bracketing fire ,fire and aft of the ship itself.

There are missiles that need not detonate near the ship…can leave it a sitting duck, no power…torpedoes that travel at 200 knots, etc

Cool
So the days of big armies and navies are over then amongst peers. Only need men to hold ground. So proxy armies a la’ Syria and Libya is the way to go and stir trouble up in mother countries like BLM ,Hong Kong Riots and Navalny is what it is all about now.

Nasrallah of Hezbollah, twice now, has given pretty big f***ing clues. He has warned israel that they will destroy israeli ground troops where they stand, by the thousands. That the war is over before it starts.

I would like to see Israel ‘s power curbed over time.

Interestingly the Nimitz is the oldest Nimitz class in the fleet, and the Ronald Reagan was heavily irradiated at Fukushima in 2011.
Its almost like the U.S. wants to get rid of them…
Another Gulf of Tonkin in the works?

Only difference is the Bay of Tonkin never happened,only in the deranged mind of the Americans.

“Guadalquivir” in Havana harbour also a False Flag to be able to attack Spain.

How was it irradiated? Was it close to Fukushima at the time?

Yes, very close, aside from that it helped during early rescue operations, but was ordered back to safe distance after a few days when all radiation alarms on ship went crazy.
The ship was in the middle of the Pacific for months trying to clean it up enough so it can dock without the risk it will contaminate the dock and other ships.
Many sailors onboard developed serious health issues some of them have sued the Navy with little success.

Wow! I feel sorry for the sailors as fellow people .

China could sink our ships. Do you realize what response would have to occur.

We are on the brink of WWIII.

Trump needs a war to get re-elected.

Russia wants at Ukraine. Turkey and Egypt are ready to go at it over Libya. China wants at Taiwan. India and China. India and Pakistan. Israel and Iran. France, Italy, and Greece are cuing up against Turkey. NATO is politically incoherent but militarily hair triggered. In a long view Russia needs to fear China but in the short term that conflict won’t happen. But when the slippery slope is reached there will be no ability to stop the nearly instantaneous slide into the abyss.

This WWIII will be totally different. When the tipping point is passed and the cyberattacks are in the rear view mirror, pre-set war game plans will be executed instantly. The whole event will take minutes. The world will never be the same.

The African and South American nations will escape the fireworks. Indeed a new world order, but not the one envisioned by the liberals, will ensue.

Plagues, and wars, are here, and there must be an earthquake and a famine on the menu.

China has the weapons, carriers cant come closer than 3000km if they want to survive.
Thats enough to deny any mission involving carrier based jets, they simply dont have enough range to make it back and forth.
Aerial refueling is not an option either, those would be gone in 30mins in case of war.
According to the RAND Corporation the best think tank in the U.S., China would win on the South China Sea, Chinese losses would be around 50-60%, U.S. losses 80-90%, and even the strike groups themselves would be in danger.
Trumply is playing with fire.
What makes he think he can make a superpower bow when he cant even keep order at home…?

Last ditch efforts, and will continue for the near future, save the dollar and US hegemonic rule.

Chineze ass**led are wimps and they don’t stand a chance against US.US can destroy China in 1 he if it decides.We have seen how Chinese weapons are a failure.

Hashish is cheap in India are you are taking advantage of it.

Hash doesn’t make you stupid, my guess is some kind of encephalitis from living in a country that is basically an open sewer.

In the Korean war the Chinese handed the US their arse,have you never heard of the shambolic rout of US forces from the North many freezing to death?

…and that was simply conventional warfare.

And that was when they were still pretty much an agrarian society, the notion that Yanks stand a chance now is laughable.

How are they a failure?

Yes the mighty American superpower beat Grenada….but then they only had 19 reserve policemen and no army, but wasn’t it a glorious victory anyhow. How many other victories did they have, we’ll not need many fingers !

but did have 12 Cuban engineers too :)

I’m an American, I’m not stupid…you, apparently, are.

sitting ducks them over-priced good for nothing behemoths which at the best of times can scare a country like monaco but nothing much else. in particular not a country with a people prepared meet yankee-twats hubris face on, like the vietnamese or the afghanis.

Those huge carriers are obsolete and have been since an Uncle of mine was on one fighting the Japanese in WW2,he was a AA gunner,his ship was hit twice off Okinawa by Kamikazi,these days with supersonic anti ship cruise missiles those carriers are floating coffins,they have a ships company of over five thousand,all they are good for is intimidating small Countries that can’t fight back,China isn’t such a Country.

Yes those men manning the 5-inch, 40 mm. and 20 mm. guns really had a fight on their hands back then. Anyone who watches the old combat films will realize just how furious the battles were and in the words of one the “Victory At Sea” documentaries – it was men who wanted to live against men who wanted to die. Nowadays, just imagine what even a small ant-ship missile can do to a carrier if it hits the ammunition, aviation fuel or the nuclear reactor. A lost ship and a lot of dead sailors but this latest move by the idiots in Washington and the Pentagon is just more posturing and again will amount to nothing.

No problems. China should send one of its carriers off America in international waters as well as part of “freedom of navigation ” ,right?

Whilst these hypersonic missiles are a potent weapon, super-quiet diesel-electric submarines have had the ability to take them out for decades. Modern super-cavitating torpedoes can literally blow a destroyer in half, and would comfortably take a carrier out of action as well.

For US freedom of Inavigation in International Waterways, and to secure Chinese fishermen stay away from the International seamile borders of other democratic fishing countries.

ONE emp MAKES THEM USELESS, WITHOUT SINKING THEM. sorry for the caps.