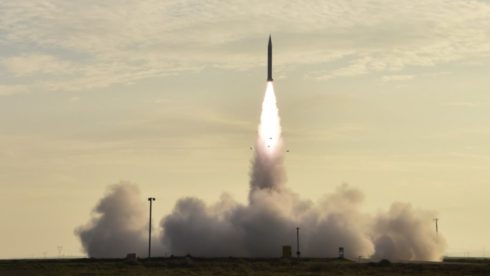 On August 6, China announced that it had successfully tested a new hypersonic aircraft which could carry nuclear warheads and penetrate any current missile defenses.

The Xingkong-2 or Starry Sky-2, completed its first test flight on August 3 at an undisclosed location in northwestern China. During the test flight the Starry Sky-2 conducted extreme turning manoeuvres, maintained velocities above Mach 5.5 for more than 400 seconds and achieved a top speed of Mach 6, or 7,344km/h, according to a statement by the China Academy of Aerospace Aerodynamics.

The statement also said that the aircraft landed in a designated target zone and described the test flight as a “huge success”.

SF: HEADKLINE ALERT! Surely this is ballistic missle, not “aircraft”?

Refers to the warhead. Like the Russian reentry vehicle.

Seems to me it’s not a hypersonic aircraft, but a missile.

Xingkong though does have a ring to it, almost like King Kong!

very good answer to a question, which has not been asked.

Don’t know if it was even that, he basically told us that a hypersonic craft reached hypersonic speeds. With so many words and so little information, I’m guessing he’s an American :)

I don’t think so.

Sarmat is a heavy ICBM, it will be used to deliver huge nuclear warheads in large numbers as MIRVs, after the Hypersonic Avangards/Kinzhals cleared the way from US built, zionist paid “missile shields”.

Also Kinzhals are anti-ship and air to ground missile with hyper-sonic speed of Mach10 and Avangards are “glide vehicles”- gliders not missiles. So one should not mix them up because they are different weapons. Also I was not talking about Kinzhals anyway.

war is boring is pentagon propaganda.

in fact, i don’t even waste a second in your walltexts, you have gotten a real analysis from me, now go read war is boring and get brainwashed.

What exactly was “pentagon propaganda” in the text?!! I don’t care about your “analysis” That doesn’t fit with anything I have read on the subject You don’t give shred of evidence for your so called “analysis” or at least to prove that text I have sent is wrong. All you know is to dismiss it by labeling it with cheap comment of “propaganda” not bothering to give SINGLE proof! to confirm your claim. Your attitude is more than arrogant.

When Soyuz is launched, do You see Soyuz taking off or Proton (heavy rocket -carrier)? Any rocket carrier is reaching hypersonic speed otherwise it couldn’t place satellite into the orbit. But in this article it is stated manouver at 5.5 mach. The rocket can’t do it, so it must be about object carried by rocket. I believe something is lost during translation.

that happens when you copy articles from indian sites

they probably used the term “aircraft” while they should have used “vehicle”, in that way it makes sense.

Come on guys! Aircraft is obviously a translation error. Of course it is an aircraft in a general sense but in Everyday English we would normally call it a rocket or missile. Give Sf a break,English is not their mother tongue.

Perhaps good, WWIII and makind will be over in lest yhan one hour it seems.

The article is not very clear, they show a rocket and talk about an aircraft, hypersonic glide vehicles move a lot faster than Mach 5-6, if it is an aircraft airlifted by a missile for take off purposes, it must be relatively small craft.

If the craft is deployed in outer space, it’s travel velocity would be a lot higher than Mach 5-6. Ballistic missiles travel at +7kms per second in outer space.

See I knew the story was bullshit, they called a missile an aircraft. the story is completely wrong.

your level of judgement and concluding astound, me.

Do you mean it was absolutely a fantastic comment, or he made himself look like a complete twat ?.

You don’t do tongue in cheek do you?

Sorry guys, but please check the article before posting it.

it wouldn’t surprise me if Russia and China shared some data on general hypersonic principles, or even if they researched some of them jointly, as it is of the utmost strategical importance for them (and for all those that still value peace and justice) to be at least one pace ahead of the US ballistic missile “shield”.

So far the correlation is in favor of RU/PRC, as they both succesfully tested (and possibly are producing) hypersonic missiles, while the US is still unable, with the current iteration of SAMs, to intercept conventional ICBMs.

It’s pretty much sure that when the US will be able to deploy systems able to intercepts current ICBMs, RU/PRC will already have hypersonics in operational service.