A Chinese Navy ship stole an American underwater research drone in full view of a US crew in the area of the South China Sea, contested by China and the Philippines. 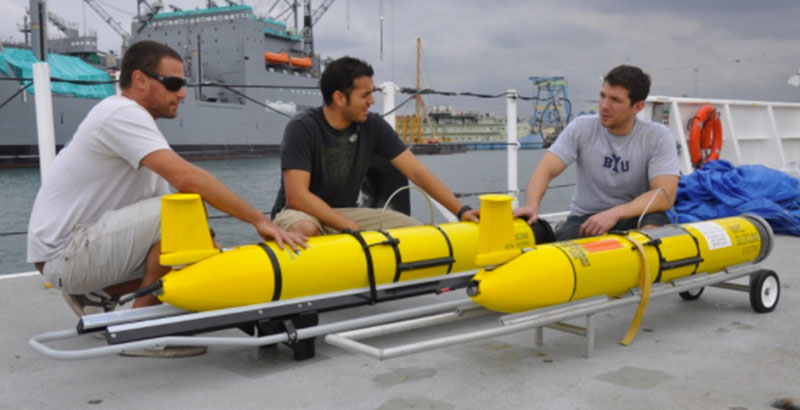 Engineers inspect a littoral battlespace sensing glider aboard the USNS Pathfinder in 2010 (Photo: US Navy)

An American underwater research drone was stolen by a Chinese Navy ship in full view of a US crew in the area of the South China Sea, contested by China and the Philippines, the Fox News TV-channel reported on Friday, citing US defense officials.

The incident took place approximately 65 kilometers west of the Philippines and about 240 kilometers from Scarborough Shoal on Thursday around noon local time. Reportedly, the Chinese ship had been secretly monitoring the American USNS Bowditch ship, which deployed the drone, a Slocum Glider, during several days.

“This is an act of war against the United States,” analyst and author of ‘The Coming Collapse of China’, Gordon Chang, told Fox News. According to Chang, the move was an act of war because the Chinese stole US military property.

According to reports, the US Navy is an owner of the research ship, which is operated by Military Sealift Command, with a crew of contracted civilian mariners and scientists. Allegedly, the underwater drone was used to gather oceanographic data and to map the sea floor and did not contain any classified material. According to a defense official, the USNS Bowditch was equipped only with small arms, which were likely stored away on board. The cost of the drone was roughly $150,000.

The American crew watched the process of taking of the underwater drone by the Chinese from a short distance away. As the defense official told Fox News, the Chinese Navy ship was only a quarter of a mile away.

After the drone was plucked out of the water by the Chinese vessel, the crew of the American research ship tried to call the Chinese ship over bridge-to-bridge radio, but to no avail.

A formal protest, known as a demarche, was lodged by the State Department and delivered to the Chinese government by the US ambassador in Beijing on Friday.

“We call upon China to return our [unmanned underwater vehicle] immediately, and to comply with all of its obligations under international law,” Press Secretary for the Pentagon, Peter Cook, said.

Meanwhile, officials at the Chinese Embassy said they had no immediate comment.

China did not steal it, it was confiscated, big difference. US covert operation in foreign waters deserves to be confronted, those drones could serve any purpose.

This one is interesting, very interesting. If I had to bet, I think this will disappear very quickly from the public eye. Nothing is innocent where any military is involved. That is not how they roll.

The oceanographic device was found, nothing more and nothing less. I just have to laugh at the remark by the tough-talking lawyer Gordon Chang that “this is an act of war.” This is the same Gordon Chang that since 2000, has predicted the collapse of the economy and a civil war in China. He has been wrong on all of his fanciful predictions and should not be taken seriously.

I wonder if it is a “special” drone made to be confiscated?

It reminded me of Yankees soldiers captured in Iran water.

Why China took it they want to copy the design of the drone. Mass produce and sell with a tag of made in China ..