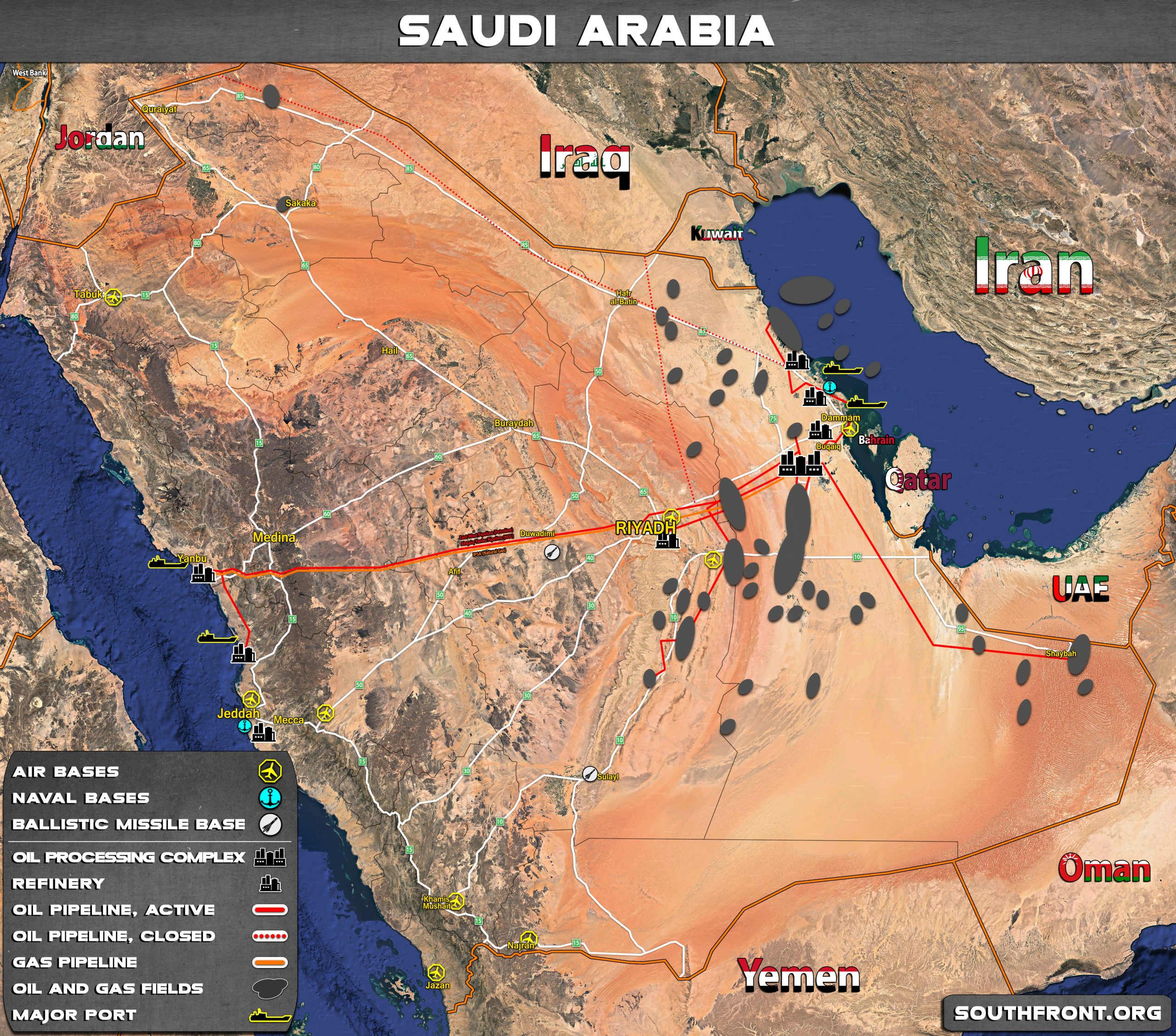 China has significantly reduced its imports of crude oil from Saudi Arabia in recent months, a recent report has revealed, which notes that the Saudis are no longer among the top suppliers of crude to China.

The analytic report published by Oilprice.com shows that Chinese oil purchasers, including state-owned oil companies and independent refiners, imported a total 1.26 million barrels per day (bpd) of oil from Saudi Arabia in July, a record low that is largely due to high benchmark prices set by Persian Gulf Arab producers for orders placed in April.

For two years, Saudi Arabia has been either the number-one or number-two oil supplier to China, the world’s top oil importer.

However, a slump in global oil prices that began in March and continued into April, mainly a result of a price war between Saudi Arabia and Russia as well as the massive decline in demand for oil because of the coronavirus pandemic, pushed many Chinese buyers to take advantage of the ultra-cheap oil and stock up their reserves.

That caused imports into China from the Americas to surge at the expense of Saudi Arabia. In fact, imports from the United States and Brazil increased in July, showing that Chinese preferred supplies that took almost 45 days to reach the country from the Americas over the cargoes on the shorter route between the Middle East and China.

The report predicted that the Saudis will have to wait for months to be able to recapture their previous share of the Chinese market. It cited economic data as showing that supplies of crude from the US and Brazil into China would continue to be strong in August and even in September as the Chinese buyers have  already chartered tankers for the future deliveries. LINK

At the same time as it is reportedly reducing purchases from the Saudis, in terms of more long term trends China has been steadily increasing its purchases of oil and gas from Russia, Iran and Iraq to unprecedented levels. Moreover, in each case the purchases have been locked into long term arrangements that signify that while the current shift away from Saudi oil may have been decided based on current conditions, it is also part of a long term shift in Chinese strategy and relations that involves replacing Saudi oil purchases with other suppliers, although as it traditionally does in its relations with other countries China will continue to maintain cordial relations with the Saudis unless there is a specific dispute that cannot be resolved by quiet diplomacy.

Saudi oil might be runing out. Yemeni stolen oil would also be in jeopardy as Houtis repels both Saudi and isis soldiers

That’s what I heard a few years ago. Some say that the water cut from the Ghawar Field was in the 90% range; not looking good for the Saudis.

Yes the unreliable Jim Willie who might have 1 or 2 good input. Saudi oil running out would explain the yemeni war.. As saudi supply their oil from yemen..isis conveniently positioned in oil rich region if i m not mistaken

ISIS is their foreign legion, Saudis themselves are total cowards.

Kingdom from the Hell days are numbered ! The moment they fall, the whole Zionist project in Middle East will start to fall into the abyss and take down IsraHell with it.

I hope you are right, I just don’t trust anybody any longer. I’ll believe it when I see it done. There was also Chinese gluttony of cheap oil, specially Iranian, so their strategic reserves are full. Saudi’s have made some wrong moves.

Saudi Princ MBS is walking catastrophe. He ruins everything he touches

Also Chinese are gradually switching on gas… what can be switched….

Too many weird things started to happen in this every day more crazy world. We are entering the time of very big global changes now.

Yeah I know about South Pars. With so much energy reserves there are no problems for Iran’s future and development. Long years of sanctions and hardship will be forgotten soon. You have huge human potential and young nation, the future is yours; to confirm everything that you are capable of.

As a attention WHORE now you are kissing Iranian ass lol and seen the light.

Ali is the only Iranian for whom I have respect. You would be Iranian bots (your boyfriend Zionism=EVIL who is not Iranian) You are really TURK a ASS LICKER’S and absolutely same peaces of shit as you were before !! I have zero respect for you. I am pro Assad and you are the ENEMY of Assad and Syria! Your regular spitting on Russia and kissing of Turk ass double faced game, must stop now !

You are just an attention WHORE and a punk liar! Nothing else and a joke :) with multiple trolling accounts, the latest being IN EXILE.

You are would be Iranian bot and faggot prostitute just like your boyfriend Zionism=EVIL .

You can not be pro-Assad and pro-Erdogan in the same time like you 2 bastards are doing it all the time. First I was convinced that you are pro Iranians bots doing dirty game against Russia. Now I am 100% that you bastards are not Persians and you are definitely NOT pro-Assad ! So it was logical that people like you attack Putin-Russia all the time.

It’s past due time to destroy the petrodollar, the global Ziocorporate terrorists have already financed too much criminality around the world with it. Euro funny money shouldn’t be used to replace it either.

Paper tiger China is crumbling from within with droughts,famines, a low fertility rate and food shortage.Its a matter of years before it crumbles completely.Also as I said previously India captured significant Chinese occupied territory and those assholes werent able to do much .Hope southfront publishes this news. :D

Paul do you have a traumatic brain injury?

Actually, “@paul” is IronZion’s clone pretending to be indian…

He would have it, if he only had brain!

https://media2.giphy.com/media/l41lFU69ZXu03qWrK/giphy.gif you are triggered mate. use an extinguisher

Indians eat too much curry.

India has 20 million confirmed CIA virus cases and is one the most impoverished failed states. You are so ashamed to post that you use a western name instead of your real Hindu name. Ranting against China will not make an iota of difference.

while China has made the greatest strides in social economic improvements in recent decades, India has also improved conditions, socially, economically, especially in the past 20 years

Covid is a scam, that’s why the Indians doesn’t care about this fraud. Its just keeping up appearances just like everyone else, Russia included.

China and India are fighting too long over some worthless wasteland. Instead they should cooperate against angloamerican hegemony. Both India and China suffered terribly against british criminals in 19th century.

To Russian oil. Saudisis will cry and rage :)

Nobody ever like the Saudis anyway and now they also have a huge deficit and a depleted economy. Chinese are focusing on Eurasian powerhouses like Iran and Turkey, while geographically impoverished South Asia or a fractured Arab world have very little interest for them. They may assist in rebuilding Syria, mostly because of their partnership with Iran, whom they like and have signed a long term pact.

Saudis have bankrupted themselves with the Yemen quagmire.

Good, cut them off from their cash. Less money to keep waging war in Yemen and funding terrorists worldwide.

China has signed a $400 billion 25 year trade, security and economic deal with Iran and is distancing itself with all US vassal states.

For China, the deal is a break-through. Stretching from the Caspian Sea to the Indian Ocean, Iran will make for an indispensable ally for China’s BRI to which all the regional states have subscribed. Thanks to its vast deposits of crude oil and natural gas,Tehran can aid Beijing to withstand an American blockade on its sea-line of communications. More importantly, China having a capable ally in the heart of the Middle East will frustrate Washington and divert its attention and resources at a time of Beijing’s choosing. From 2010 to 2019, the Chinese investments have averaged USD 200 billion each year, but given the slowing US economy, and a full blown trade war with the US in the works, and impact of the devastating pandemic on a already diminished US global standing, China is now in a turf war with the declining US and is squeezing the US out of Eurasian orbit.

If it wasn’t for the damn Himalayas, Iran/China would be able to build a pipeline and not have to worry about the Malacca Strait or tanker piracy.

oil is now 46$ per barrel–excellent for Russia, Iran, not SA…Iran/Russia possess vast amounts of gas; SA must import gaS FROM THEIR NEW ENEMY, QATAR