Just days before Trump’s meeting with the Chinese president in Hamburg later this week for the G-20 summit, the Trump administration sent a guided-missile destroyer near Triton Island in the South China Sea, Bloomberg reported, a move “which may cause concern ahead of President Donald Trump’s meeting with his Chinese counterpart.”

According to an anonymous official cited by Bloomberg, the U.S. Navy sent the destroyer USS Stethem within 12 nautical miles (22 kilometers) of Triton Island on Sunday, passing through the contested waters on the basis of “innocent passage.”

It was the second such operation conducted by the US during Donald Trump’s presidency. On May 24, the US Navy guided-missile destroyer, the USS Dewey, came within 12 miles of the Mischief Reef in the Spratly Islands, another disputed archipelago that lies in the southern part of the South China Sea. At that time, the Chinese Defense Ministry also sent two frigates to “warn off” the US vessel and said that it was “firmly opposed to the US behavior of showing force and boosting regional militarization.”

The news of the US ship deployment to the contested area comes just days after reports suggest China has completed construction of new missile shelters on Mischief and Fiery Cross reefs. 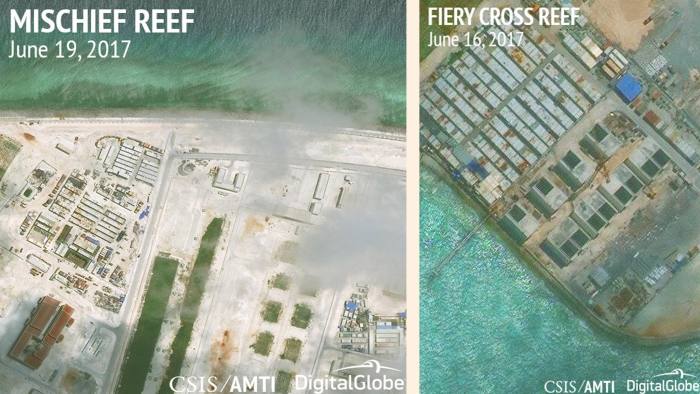 The sea patrol move could signal that the U.S. is displeased with China based on the extent of its efforts to pressure North Korea to curb its missile and nuclear programs. The White House has made several moves in recent weeks, including announcing economic sanctions against Chinese companies with ties to North Korea.

And while in recent weeks China has shown remarkable restraint in not responding, or retaliating, to US escalations today Beijing finally reacted instantly and with “outrage” with People’s Daily reporting that China deployed military vessels and warplanes to “warn off” the USS Stethem, according to Chinese Foreign Ministry spokesperson Lu Kang.

“Under the pretext of ‘freedom of navigation,’ the US side once again sent a military vessel into China’s territorial waters off the Xisha Islands without China’s approval,” the spokesperson said in a statement, adding that such US behavior “has violated the Chinese law and relevant international law, infringed upon China’s sovereignty, disrupted peace, security and order of the relevant waters and put in jeopardy the facilities and personnel on the Chinese islands, and thus constitutes a serious political and military provocation.”

“The Chinese side is dissatisfied with and opposed to the relevant behavior of the US side,” Lu added.

Escalating matter further, China’s foreign ministry also accused the US of “deliberatrely stirring up troubles” in the contested waters and warned Washington to “immediately stop such kind of provocative operations that violate China’s sovereignty.”

“Working together, China and ASEAN member states have cooled down and improved the situation in the #SouthChinaSea. The US, who deliberately stirs up troubles in the South China Sea, is running in the opposite direction from countries in the region who aspire for stability, cooperation and development,” Lu added.

The head of US Pacific Command, Admiral Harry Harris, recently criticized China’s activity in the region. “China is using its military and economic power to erode the rules-based international order,” he said in a speech delivered on Wednesday in Brisbane during the joint US-Australian military exercises.

“Fake islands should not be believed by real people,” he added, as reported by Fox News.

The Paracel Islands, of which Triton is a member, are contested by China, Taiwan and Vietnam.  China has already built runways, aircraft hangars, radar sites and hardened surface-to-air missile shelters on its artificially-created islands in the region, according to photos analyzed by the Washington-based Center for Strategic and International Studies (CSIS). 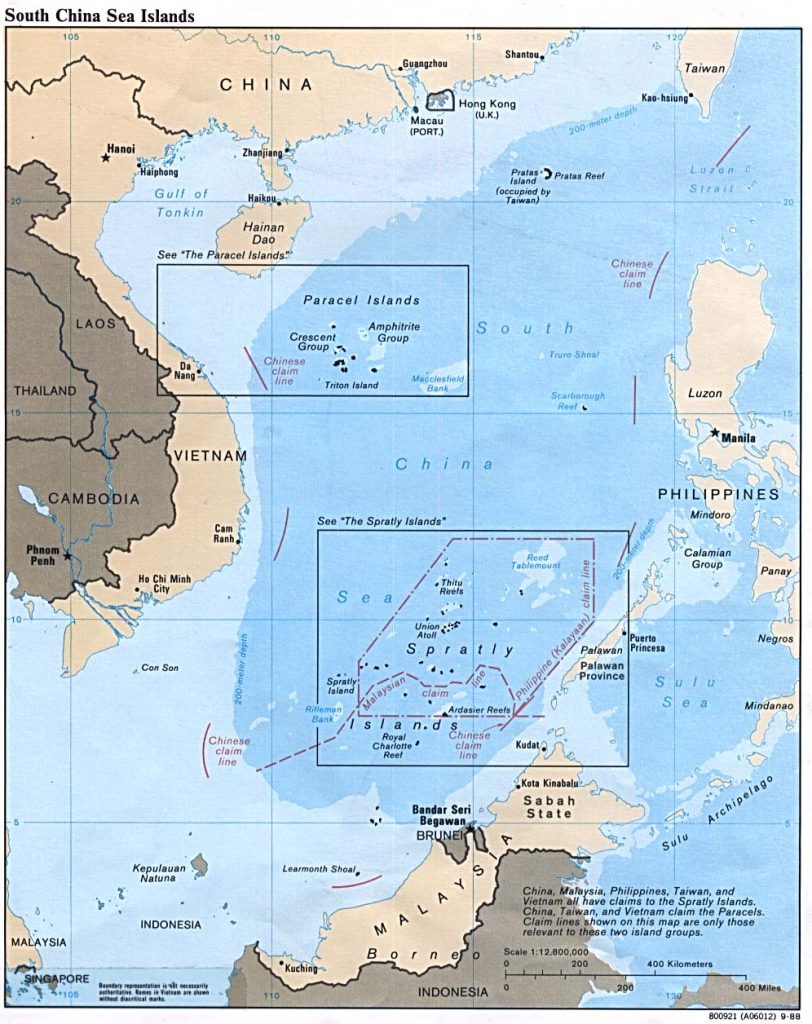 Beijing’s actions have sparked concerns in Washington and the US Navy, which is fiercely opposed to this Chinese initiative, has deployed additional warships in the disputed zone, conducted maneuvers near China’s artificial islands, and flown over them, claiming it has been done in the interest of the “freedom of navigation.” In response, China called Washington’s involvement in the dispute the “greatest” threat to the region.

In early June, China and the US both held exercises involving air and navy forces, in another episode of confrontation over the disputed South China Sea. The US sent two B-1B Lancer supersonic bombers to fly a 10-hour mission from Andersen Air Force Base, Guam, which was conducted in conjunction with the US Navy’s Arleigh Burke-class guided-missile destroyer the USS Sterett.

A day earlier, the Chinese People’s Liberation Army (PLA) conducted its own air and navy exercise off Hong Kong. The patrol mission involved three helicopters and two Type 056 corvettes, the Qinzhou and the Huizhou, the Defense Ministry reported.

no business of US i know how they would react to any foreign ships that came close to US mainland, two faced bastards this USA

So the US complains about china building illegal bases in the South China Sea while at the same time they are building bases illegally in Syria.

This is another example of the great hypocrisy and provocative nature of the much despised US foreign policy. Under the pretext of “freedom of navigation” it is most likely a mission to monitor Chinese communications, aircraft and ship movements, underwater mapping, work progress on the islands, etc.- in other words: spying.

Where are we heading? Let me remind here a fragment of an ancient vision: “And [the king of the north] will go back (to) his land with great wealth [1945. This detail indicated that Hitler will attack also the Soviet Union and will fight to the bitter end]; and his heart (will be) against the holy covenant [Soviet Union introduced state atheism and believers were repressed]; and will act [it means activity in the international arena]; and turned back to his own land [1991-1993. The collapse of the Soviet Union and the Warsaw Pact. Russian troops returned to their country]. At the appointed time [he] will return back [it also means the breakup of the European Union and NATO], and will enter into the south [this can be Georgia], but it will not be as the former [2008 – Georgia] or as the latter [Ukraine], for the dwellers of coastlands of Kittim [USA, in the beginning without Britain] will come against him, and he will be dejected, and will go back.” (Daniel 11:28-30a)

What will induce the “king of the north” to enter into the south? Jesus said: “For nation will rise against nation”, as in 2008, and then…

This will be a nuclear war. (Revelation 6:4) “A great sword” in this context means a nuclear sword. This will be a slaughter. However, it will be neither “the end of the world” (Armageddon). As Jesus foretold, it will be “the beginning of birth pains”. (Matthew 24:7, 8)

All the details of this vision are being fulfilled from the time of ancient Persia, in chronological order. It is true that this vision is variously interpreted. As one can see, it has a lot of details. Therefore the insightful person is able to detect any error or sophistry. (Daniel 11:33; 12:10)

What for? when the Philippines (a US vassal country) asked for help in the spratly islands over chinese incursion of Philippine territory, they didn’t come. Now, that the chinese are all over, they say they are coming for “freedom of navigation” F**k US Imperialism! May the chinese sink all their ships.

USA/NATO wants China to break ties with North Korea in order to weaken both countries defences.Days ago Trump sold missile and sophisticated weapons to Taiwan while trying to isolate China and North.Let personally talk to North Korea because even now their are having military drill with puppet South Korea.Let USA solve their problems which their have created and not making it Chinees problem or Russian problem.USA is building illegal bases in Syria with their blind arrogant stupid Nato barbaric puppets.USA/NATO and their UN organization or terrorist Council are the only ones which promote and spread terrorism all over the world for the benefit of USA.

Even if the ww3 break out only USA puppet supporters will pay a heavy price with irreversible damages.Currently USA is so overstretched and can’t maintain a heavy war for even one clear day therefore USA is pulling its blind puppets Nato in this grave with them.Even now USA has hidde its nuclear stock pile in underground bunkers knowing that China,Iran,North Korea, Russia or even its puppets can take them out very easily or hostile Erdogan.