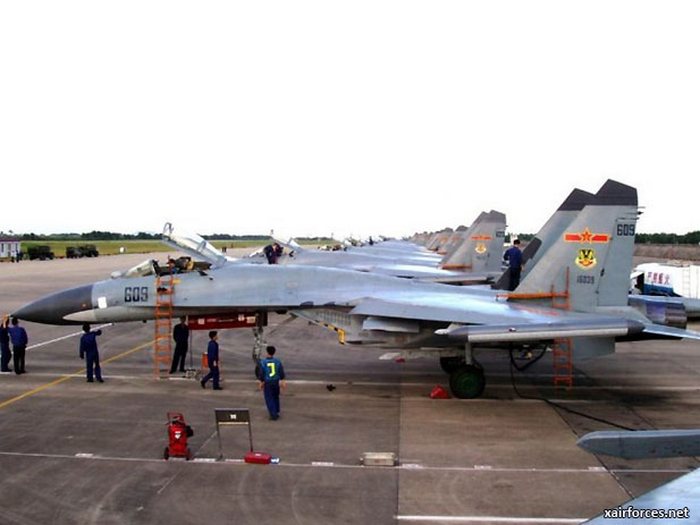 China has received the second banch of 10 Su-35 multi-role air superiority fighters from Russia under a contract signed back in 2015, the Russian state-run news agency TASS reported on December 22 citing a source familiar with Russia’s military and technical cooperation with foreign states.

According to the source, “China will receive the remaining 10 aircraft in 2018.” The Federal Service for Military-Technical Cooperation has not commented on the report.

Earlier TASS reported that China received the first four Su-35 fighters in late 2016. That report was also based on the agency’s sources.

Just in time to deter US warmongering against NK I hope.

The Chinee are no fools. This is proof of the confidence the Chinese have in the capability of the Su35 to counter the F16, F18’s and F35’s of the USN aircraft carriers in the South China Sea. Furthermore, if push came to shove, the Chinese have their long range hypersonic missiles which can sink a US supercarrier hitting it at Mach 10 +.

Seeing a US carrier stricken by a missile would be a wonder to behold. What would Nikki Haley say to that I wonder ? Would she ‘take names ‘? :)

Not just the US carriers.. but the terrible F-35’s as well that are NO match for the Su35’s…

Well its just a proof what China don’t have working 5-gen fighter.

arturfak The Chinese lack the ability to build the Jet Engines for this type of plane. Its only a matter of time before they master this technology.

Chinese has already mastered the technology needed and now join the west to companies able to build powerful lasting engine thru there break through in Rhenium bases alloy.

There is nothing the Chinese cannot do

More to come to leave the west far behind in everything

They say they have mastered the technology for high powered fighter jets than they need these SU35 for testing and copying.

The point is the Chinese is now able to build their own engines and does not need to buy from Russia any more.

F35 orders originally was meant for the engines for their modern planes.

If there is techology to be obtained from Su35 , why not?

They paid billions for the planes which are also very powerful.

I fully expect a Chinese clone to appear in a few years time, just as happened with the SU-27 and SU-30. You sell the Chinese a few dozen aircraft, they clone them and then start building them by the hundreds.

There is always a technology time lapse in these arms sales. The SU-35 version sold to the Chinese would of course be less technologically up to date, but still a powerful warplane. By the time the Chinese have been able to clone it (engines are the most difficult), the Russians will be far and away with full 5th Gen fighters. Russia also uses these sales as political tools which they expect to be reciprocated in some political or economic way . .

I sincerely doubt this. Main problem is not copy-paste, but know-how. Chinese still have problems with copies of jet engines, relialibility etc. You can have turbine blade in the hand, but how to make it ? 10-15 years at least.

Already done. They have mastered how to make Rhenium alloy for the engines this now at par with Western countries.

rhenium is not enough zhe metallurgical protocol is the key. and chinese today are not at this level.

I do not know where you get your info from . Can you provide a link to prove that Chinese achievements in world class single crystal turbine blades from rhenium-nickel super alloys; adding rhenium to nickel increases the superalloy’s melting point, allowing for a hotter and more efficient engine cannot compare to your western engines?

We are all ears .

Do not just post something without proofs or links to show. Just saying is not good enough . It only shows you still want to continue to be an Ostrich with heads in the sand denying the achievements of an Asian power over western power …

Not true. Chinese ordered earlier as stop gap measure as they developed their own 4th gen ++ planes and to have the engines as Russians did not want to sell the engines alone.

China now has developed better planes like the J11D that can easily take on the best 4th gen from US.

China at last has joined the Western club to build powerful rheniun alloy based engines . That means China does not need Russian engines anymore.

China’s J20 can now be fitted with the new Chinese made engines and made stealthy.

So all your preconceptions are out dated.

J23 is on development and 6th gen in the making

This is only the beginning.

China is getting the older version. Russia wants China’s air defenses to improve so the Russian military won’t have to defend Asia alone. If China can clone them and sell cheap versions of them and Russia can sell more of its top of the line jets in such arms sales to potential victims of the racist supremacist global Jewish confederate slave empire , even better to wear down the empires military. Then China will draw some of the wrath of the empire so the burden on Russia will be less, which is worth a lot more money then any lost sales of very cheap cloned Russian jets. Putin is seeing the big long term picture. If China wants the good stuff they will have to buy hundreds like India did.

The Chinese only care about the Chinese, be careful when dealing with these.

Raptar Driver Putin the fool of Russia loves to sell the SU35 to China.

Not sure he is fool but I would not sell them the best fighter in current production.

Raptar Driver Putin is a fool,apart from being weak, feeble and useless and a slave of the Khazars.

Reason, Putin is willing to sell the SU35 and S400 to countries that are under Khazarim control, example, Turkey, UAE, etc but not to Iran because of objections from Israel.

When the time is right, Putin’s Khazars in Russia will destroy the Russian Federation so they can loot and plunder it.

It is automatic for me to dislike politicians, they only serve themselves and those who keep them in power, time will tell with Putin, so far more good than bad but yes it is possible his reign was a ruse to lull the Russian people into the hands of their enemies. I hope he proves us wrong!

Raptar Driver The Khazarim now control Putin, he is their slave, “Sayanim”.

Russia has 40% of the worlds resources which is being looted and plundered by the Khazarim whilst increasing numbers of Russians have fallen into poverty.

Russia’s population get nothing from its income, half of Russia’s people get poorer whilst all of Putin’s Khazars become US$ Billionaires.

Putin’s army of Khazar Billionaires who started with nothing and corruptly acquired Russian State assets now own large part of the Russian economy.

Jerusalem Post: AT PUTIN’S SIDE, AN ARMY OF JEWISH BILLIONAIRES http://www.jpost.com/Jewish-World/Jewish-Features/At-Putins-side-an-army-of-Jewish-billionaires

After 18 years of Putin, the reality in Russia is more Russians living in poverty (20 million) an all time high since 2006 whilst approx 50% of Russians live on an income of US$500 per month or less.

If Chinese do not care about Chinese, you expect Chinese care about you?

Go fly your kites somewhere else . Do silly.

I don’t expect them to care about me period, or anyone but them, that is my point keep your tech to yourself because even a friend can eventually use it against you; I am going to fly my kite now.

Whilst Putin the fool of Russia refuses to sell the SU35 to it’s slave country Iran, the Chinese will buy a few handfuls and reverse engineer these planes and build faster better versions by the 100’s or maybe even 1000’s.

Suk 35 is based on the Suk 27 the Chinese already have, the airframe is similar, I am sure the Russians did not provide the latest avionics and EW package, the Chinese can install their own their own avionics and electronic war hare suit, it appears the Chinese are interested in the engines, which have been upgraded for the Suk 57. The Chinese need aircraft with long range and good air to air performance in the South China Sea region.

Chinese does not need to reverse anything today.

It’s the other way round niw

Joe You are right as I did not check the latest information.

China is ready to launch its new ­J-11D fighter after it failed to acquire Russian engines on schedule and was forced to develop its own technology, military observers said.

The progress included advances in home-grown turbofan technology and radar systems, and showed that Beijing was no longer reliant on Russian engines for its new generation of fighters, analysts said.

After a decade of negotiations, China and Russia inked a deal for 24 Su-35 aircraft last year.

Now I am not sure if this Chinese achievement will make even better engine than western ones but at least at par….

Of course Chinese scientists by the thousands continue to develop better tech vs very few US high tech companies .

China powers up military jet engine tech to wean itself off Russian imports. Advances in engine design have led to the launch of the J-11D, a home-grown version of the Su-35.