The Chinese Communist party-owned newspaper has called on the country’s government to “display its resolution to recover Taiwan by force” before the US will start to dictate terms in the mutual relations. 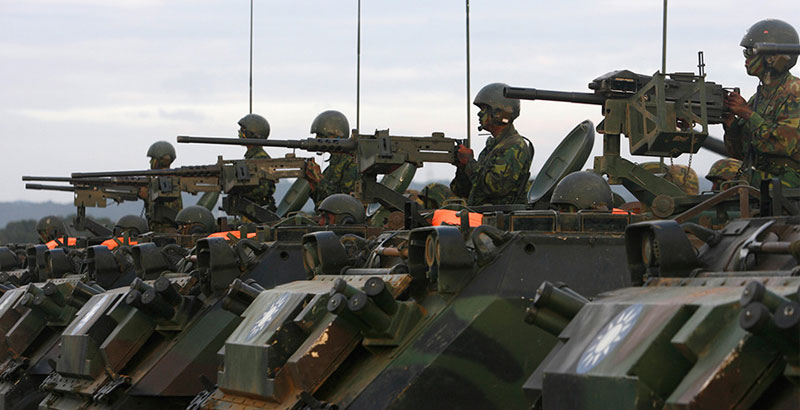 Taiwan, which is considered by Beijing as a renegade state, should be seized by the Chinese government by force, before the new US administration will activate the “Taiwan card” in order to dictate terms in mutual relations, Global Times, the Chinese Communist party-owned newspaper, wrote earlier this week.

“It might be time for the Chinese mainland to reformulate its Taiwan policy, make the use of force as a main option and carefully prepare for it,” the article stated. “If the Chinese mainland won’t pile on more pressure over realizing reunification by using force, the chance of peaceful unification will only slip away. Independent forces on the island publicly believe that time is on their side… they can turn the tables with the help of international forces. The future of Taiwan must not be shaped by… Washington.”

The reason for such a calling was recent statements of the US President-elect Donald Trump and his team regarding China and Taiwan. Since the 1970s, the global community has been communicating with the two countries under the ‘One China’ arrangement, according to which countries can maintain formal diplomatic relations with either China or Taiwan, but not both. The US established formal relations with China in 1979. Although the US has informal ties with Taiwan, interacts with it commercially, and even sells it weapons, the leaders of the two states have not communicated directly for 40 years. However, last week, Trump had a phone conversation with Taiwanese President Tsai Ing-wen.

In addition, last Sunday, speaking on Fox News, Trump also called into question the need for the US to maintain formal relations with Beijing instead of Taiwan, stressing, “I fully understand the ‘one China policy,’ but I don’t know why we have to be bound by a ‘one China policy’ unless we make a deal with China having to do with other things, including trade.”

For this reason, Global Times warned that Beijing should solve the “Taiwan question” before Trump’s team takes over and proceeds to “utilize the one-China policy as leverage to blackmail Beijing.”

“It is possible for Washington to activate the Taiwan card in a crude manner at any moment. The tacit understanding and hidden rules made between China and the US over the Taiwan Straits can hardly be respected for long. Even the one-China policy can be attacked unexpectedly. That mirrors the fact that we are far from able to control the destructiveness of the Taiwan question,” the newspaper wrote.

China definitely needs to assert her dominance in the area and Taiwan is a loose end that needs to be brought back under Chinese rule. If the US manages to infiltrate Taiwan then China has a huge problem right on its’ doorstep.

And is dominance over all neighbors? Does china have the force to take Taiwan, or will aggression be met by shut down of all Chinese commerce. Leading to collapse of their govt.

You have no fucking idea china have been tried to avoid killing own people.Now Time has come.Allianace with Russia means Yankees can not do any thing.Both China and Russia are ready for all out war.

The CH/RU alliance is quite strong, this I respect. The yanks pulled out of the Phillipines and now china wants all of S China sea. What is the next step?

that sea has its name not coincidentally. learn history. it is enough history of the 20th cenury.

Chinese military sucks. It’s a bunch of college kids forced to join the army for three months out of the year for a bunch of political brainwashing. The chinese generals suck, they have never experienced war and are essentially politicians looking out for themselves and “the party”, not for the well being and defense of the country…

Yes, I know alot about china…..

Last time they tried to throw their ‘military’ prowess around, they got a bloody nose from the Vietnamese. And well deservedly so. Nobody like a school yard bully, aye.

so did the Yanks and they got a lot worse from the Vietcong. Laughable, little men dressed in black whitewashing the Yanks with primitive weapons.

The Chicoms called it a painful punishment for Vietnam. The Vietnamese had other ideas, having inflicted 30,000 casualties on the Chinese. Vietnam had invaded Kampuchea, when those China backed mass-murderers in charge of the killing fields – the Khmer Rouge, turned to killing the Vietnamese minority.

The Chicoms can reliably rely only on two nations: Pakistan and Cambodia. The Russians are watching their own backs in Siberia. Trump just has to ease off a little on the Russians in Europe and the Middle-East, and the atmospherics will change between the Americans and Russians.

Vietnam took no nonsense from the Chinese when they wanted to troll their waters searching for the ill-fated MH370. They can still recall what Ho Chi Minh said: ‘better to eat French s**t for a few years, than to eat Chinese s**t for a thousand years.

Ask Yankees how much they suffered during Korea and Vietnam wars.You know only of 1960s.Go back to school.

Fucking chink commies. Trump and Putin should nuke them to ash.

chjine will be the ruler of the world. and not the gringos.

The Chinese have enough problems dealing with their own population, let alone aspire to world domination.

china is a 5000 years old empire. during this period only the last 160years was not the biggest econom. within 1-2 generetions will be again. they have such experiences abaout the west can only dream. they will solve their problems.

Not really China was set up by the West to be the bogy man for WWIII. All its economic developement came from the West, Rockefellas began in the 50s and Rothschilds well before, its weapons are reverse engineered from other designs or bought from Russia on its own it is a paper tiger and exceedingly vulnerable to outside interferance.

Good info! So the fighting irish where the gringos. I work with many latin americans but have not heard the word used. I guess they may feel this is derogitory insult to white people. I have no problem with it.

Some ethnic-Irish I know take it as a badge of honor, so long as it is understood that it is Irish who earned it. Some feel it is simply another racist slogan used against ethnic-Europeans. I believe it depends on the context it is used in. But only someone naive would believe it refers to ethnic-Europeans in general, and not specifically the Irish-race. http://whitegenocideproject.com/

It must be some kind of insult, In peru a chick at a bus station called me a gringo when taliking to her friend trying to organize tickets, as I dont speak spanish and its the only word I recognized I repeated it “The Gringo” after she said it and the whole place froze, they were wide eyed like they expected me to gun them down or something, somewhat amused by all this I laughed the girls looked nervously at each other laughed nervously and went about their business – must be their version of nigger or something, I couldnt care less really and thought the whole thing amusing – the Aboriginals here call us white c*nts and Asians white devils we hear that laugh and nod yep thats right lol.

Means blonde or you are from the United States, it has nothing to do with the race can be someone from your country or any of europe. By the way there are more blacks in Brazil than in the United States, delay a little and write Peru

thanks. but tday gringo means: less then skunk

Your mom born you with what down’s syndrome?Putin is ally to China.You should go home and fuck your mother for not giving good education.

It isn’t that simple. Nationalism is quite strong in China and many there wish to “reclaim” several of our provinces. Sure, chinese hate living in cold environment and consider land as it gets further from “World’s Center” more and more inferior, yet many russians remember how we lost 100-150 soldiers – some mutilated after death – to surprise attack on Damanskiy island at Ussuri river in 1969.

Let em fight it out, Taiwan would make it costly I bet……but if there was a time to retake it in the next few months would be when. The US is gonna be distracted by political intrigue for atleast 6 months.

Will never happen. China has a sizable military force, yes… However, this military force is basically people forced to be in the military with one of the most corrupt pesudo-politicians wearing generals’ uniforms for “leadership”… They know nothing about amphib operations, much less have the equipment to do such a thing effectively.

I am sure they know about Amphib ops. The hold exercises.

Anyone can walk off a boat onto the beach…

On the other hand it is imperative it happens, preferably around January 20. I would be surprised if the Chinese have not long prepared plans for such an invasion. Will they dare doing it? If they don’t they could as well kiss Taiwan goodbye…

aha, so Trump says:” be ready to renegotiate the fine deals you’ve been making and make no trouble for me when i return the jobs and capital back to US, OR you’ll see a possible diplomatic shift of not only US. we can also do it another way.” implications are interesting…

This is just verbal posturing. There will not be a war between Taiwan and the PRC. (I recommend the moderators of this website not allow the comment sections to degenerate into a disgraceful, hateful, embarrassing cesspool infested with uninformed, misinformed, uneducated, immature, downright stupid comments. This is supposed to be more credible than a YouTube.)