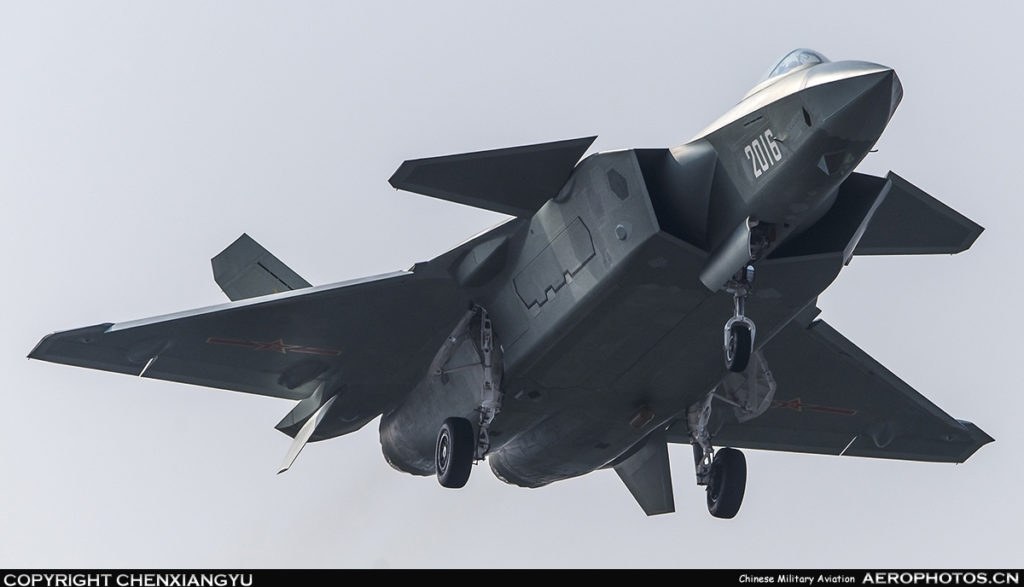 In an interview to the CCTV, a military scholar with the China National Defense University Wang Mingliang said that Beijing could send its Chengdu J-20 stealth fifth-generation fighter aircraft for patrols over Taiwan, the Asia Times reported on May 21.

Mingliang stressed that Taiwan’s F-16 fighter aircraft and Dassault Mirage 2000 jet fighters would not be able to counter the Beijing force.

Mingliang also pointed out that the Taiwanese military is not well acknowledged with the J-20 fighter aircraft and it is concerned about the capability of “precision strikes on the leadership or key targets.”

This allegation comes after the successful May 9 exercise of the China’s Chengdu J-20 stealth fifth-generation fighter jets in sea areas for the first time.

On May 23, the Pentagon officially announced that China is uninvited from a major naval drill Rim of Pacific (RIMPAC) 2018 after it criticized China’s “continued militarization” on May 19, Reuters reported.

The Pentagon spokesperson Lieutenant Colonel Christopher Logan stated that China’s deployment of bombers, surface-to-surface and anti-ship missiles in the disputed Spartly and Paracel Islands in the South China Sea is a reason of the refusal:

“While China has maintained that the construction of the islands is to ensure safety at sea, navigation assistance, search and rescue, fisheries protection and other non-military functions, the placement of these weapon systems is only for military use.”

Logan emphasized that the decision to disinvite China is just an “initial response” to the Chinese militarization in the region.

“We hope that the U.S. will change such a negative mindset,” Wang stated.

On May 24, Chinese Foreign Ministry spokesperson Lu Kang stated that China has “inherent rights” to “carry out normal construction activities and normal military training on its own territory”, Chinese news agency Xinhua reported.

“The activities and training are necessary measures for China to safeguard its sovereignty and maintain regional peace and stability, and they have nothing to do with so-called militarization,” Lu Kang said.

“Whether having such military exercises or not, whether inviting China or not, will never change China’s will to maintain regional peace and stability in the South China Sea, or shake China’s firm resolution to safeguard its own sovereign rights and security interests.”

On May 18, a Chinese newspaper People’s Daily posted a video revealing that the People’s Liberation Army (PLA) air force of China had carried out the first landing of the strategic bomber H-6K in the islands of the South China Sea.

According to May 2 media reports, China deployed anti-ship cruise missiles and surface-to-air missiles in three outposts of the South China Sea. According to CNBC, missile systems were moved to the Spratlys within the past 30 days to Fiery Cross Reef, Subi Reef and Mischief Reef, which is 216 km from the Philippines.

Mirage 2000’s and F16’s can be handled easily by the Suk35 China has gotten form Russia. J20 should have qualitative advantage over Taiwan’s Air Force.

It is designed to sink aircraft carriers, and would do a good job at that if needed. F-22 and SU-35 and even F-35 are overall better planes, but J-20 is impressive for how quickly China went from building weak 3rd generation jets to this semi-stealthy 4++. Give them ten more years. In any event, this plane is designed to sink carriers not operate as the F-22 or F-35 does.

The body of the article says “COULD send” — huge difference. Several other details also hint at a poor translation, or at someone filing copy before coffee and without proper editorial oversight. Is the J-20 even ready for a combat mission, like such an intrusion could easily become? It wouldn’t be like the Chinese to risk the embarrassment of this thing getting shot down right out of the showroom, for no compelling reason.

That said, China is taking its ill feelings vs the USA out on Taiwan, just as the USA is taking its bad vibes vs the Russkies out on Syria. It truly sucks to be small, like it always has.

I know this sounds daft, but I just have a gut feeling that China are being pulled into this. Personally I think they need to talk / threaten without acting.

From the body of the article, they ARE threatening without acting, at least for now. The title is misleading.

ABORTION RIGHTS IN TAIWAN! Abortion banners like Taiwan have no rights.

Taiwan is chinese. So, it’s normal.

Ah, but “who speaks for the Chinese” is a question just as … interesting as who, if anyone, is entitled to speak for all jews worldwide. The Communist Party has never been the boss in Taiwan; the latter’s current govt is as Chinese as the one in Beijing, just smaller. Now I feel that China is within its right to make sure that Taiwan doesn’t become an anti-PRC American outpost, but beyond that the two sides should just engage diplomatically.

The whole region loves to do business with China, which puts actual food on the table as opposed to America’s wars and debt. But this attitude “it’s all ours” is one of the reasons why China isn’t very successful in wooing badly needed allies over to its side.

not needed overrun..just a naval and aerial blockade and Taiwan show the chinese red flag