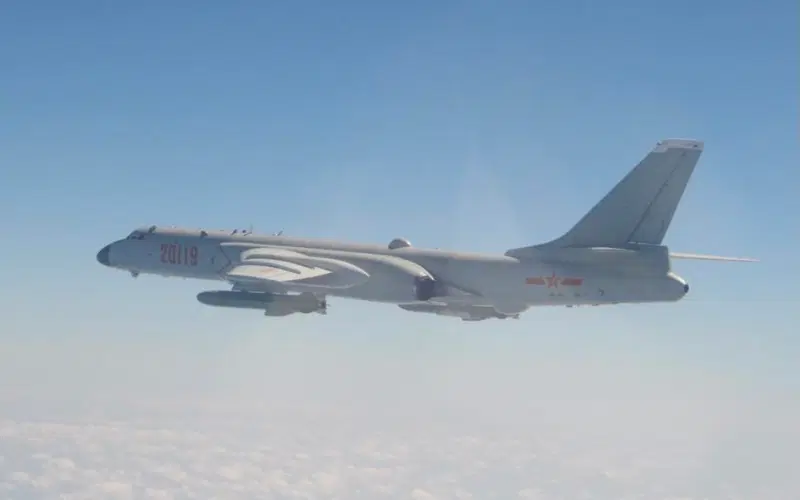 The largest such display of force since Beijing began sending planes on a near daily basis in 2020.

Taiwan’s air force deployed its combat air patrol forces in response and monitored the situation in the southwestern part of the island’s air defense identification zone with its air defense systems, the Ministry of National Defense said.

The latest flights included 20 Chinese fighter jets, four H-6 bombers (a variant of which is nuclear capable), several early warning planes and an anti-submarine aircraft, according to Taiwan’s defense ministry.

A defense ministry graphic showed that the planes followed a similar route to previous flights, flying to the southeast between the southern tip Taiwan and the Pratas Islands, which Taipei controls. Some then turned northeast, flying on the far side of the island before backtracking and heading home.

China’s show of force comes after the G7 issued a statement on June 12th calling for a peaceful resolution of cross-Taiwan Strait issues and underscored the importance of peace and stability.

Since last year, China has been flying fighter jets toward the island almost daily in what it calls a demonstration of its seriousness in defending its national sovereignty.

Previously, the largest such maneuver was in March 2021, when China sent 25 fighter planes toward Taiwan.

Back then, China responded to US State Department said it was simplifying the procedure for US officials to meet with Taiwan’s officials.

And last August, China flew planes across the midway line between Taiwan and the mainland when Taiwan hosted then-U.S. Health and Human Services Secretary Alex Azar.

Earlier, an analyst with the Japanese Defense Ministry’s National Institute for Defense Studies pointed to a pattern of Chinese air activity near Taiwan.

In his commentary, published June 8, Masayoshi Monma, noted that H-6s, which can carry anti-ship supersonic and cruise missiles, were active around Taiwan when the Theodore Roosevelt Carrier Strike Group sailed through the Bashi Channel in late January 2021. He added that fighters and airborne early warning aircraft were also present, based on data released by Taiwan’s Defense Ministry. He speculated that the former were carrying out bomber escort drills under the command and control of the latter.

At the time, Monma wrote that Chinese air activity around Taiwan was growing in sophistication and complexity, and suggested the possibility of midair refueling tankers joining such training operations in the future.

So China flew some planes. Big Deal. Seems every time someone flies a plane close to someone else’s air space everyone acts like it’s a big deal. This happens all the time and is nothing.

Tell me when they actually do something.

Either way, the Yanquis are getting PLAYED by the HAN.

China needs to end their civil war and quit wasting everyone’s time. It’s apparent to anyone including those in the West with two brain cells that the mainland have already won it. Placing troops on the island is just a formality.

It used to be a show of force meant using some force. Now they just parade around like little groupies. China has no balls Could it be all the soy? And no I’m not anti Chinese just pointing things out.

This is just typical posturing. Every nation does it at some point. The U.S. “conducts freedom of navigation operations” through the Taiwan Strait all time. China flying some old Soviet era bombers near Taiwan is nothing new.