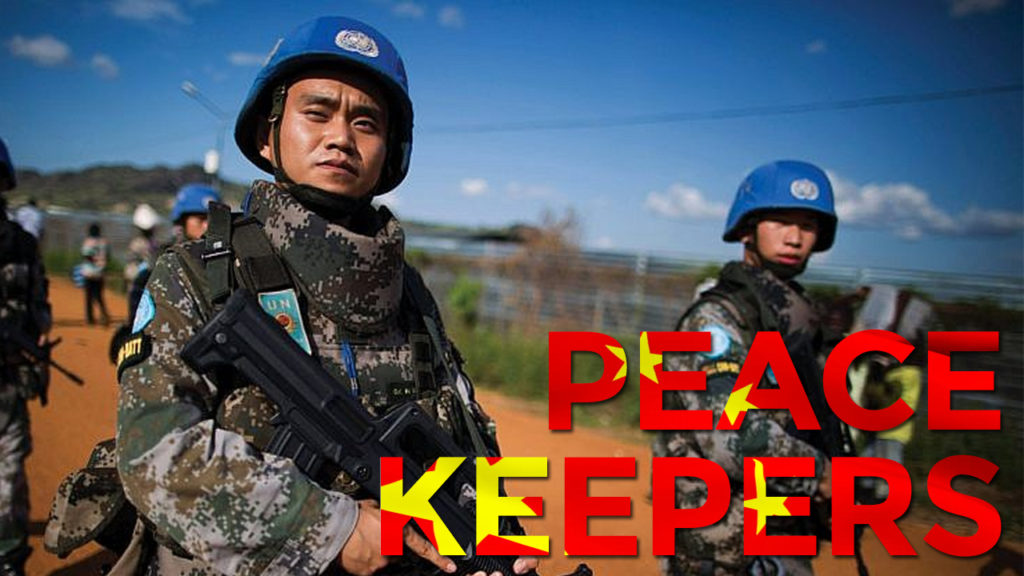 China’s participation in United Nations peacekeeping operations is an important tool in the expansion of its military and political influence. Through military cooperation with other states, China ensures the security of its key interests in various regions of the world.

The People’s Republic of China’s 2015 White Paper on National Defense defines the principles of the country’s participation in UN peacekeeping.

In this White Paper, it is noted that “in the new historical period, the Chinese army must effectively solve the tasks of protecting peace in different regions, in particular, provide assistance in case of danger; actively expand cooperation in the field of military security.” In addition, the document noted that “in order to fulfill its international obligations, China will support UN peace initiatives, exercise its right in the Security Council (SC), engage in peaceful conflict resolution, promote development, restoration, protection of regional peace and security.”

By constantly strengthening national power, China’s armed forces will more actively participate in peacekeeping events, international assistance, the implementation of the principles of humanism and other areas.

These provisions were continued in the 2017 document “China’s Policies on Asia-Pacific Security Cooperation”, which presents the attitude of the Chinese leadership regarding cooperation with other countries, including in the military sphere, in order to strengthen peace and stability.

Chinese military experts believe that the country’s modern approach to participate in UN peacekeeping takes into account Beijing’s traditional position on national sovereignty and non-interference in the internal affairs of other states in accordance with the Five Principles of Peaceful Coexistence: mutual respect for sovereignty and territorial integrity, mutual non-aggression, non-interference in each other’s internal affairs, equality and mutual benefit, and peaceful coexistence.  These principles, introduced into the Constitution of the People’s Republic of China in 1982, became fundamental in the course of establishing friendly relations with foreign countries.

China’s participation in UN peacekeeping began in 1981, when Beijing supported Security Council Resolution 4952, which extended the UN peacekeeping mandate in Cyprus. The following year, the country contributed to the financing of peacekeeping operations. Since 1988, China has been a member of the UN Special Committee on Peacekeeping Operations.

In fact, the People’s Republic began sending its military specialists to participate in peacekeeping operations from 1989 onwards. Thus, in accordance with the country’s constitution and adhering to the principles and provisions of the UN Charter, confirming the legality of military operations abroad, they have taken part in peacekeeping missions in Africa.

It should be noted that the duration of the stay of the corresponding contingent in these states did not exceed eight months. According to the PLA command, the performance of tasks by military personnel in extreme conditions allows troops to gain combat operations experience.

In addition to the direct fulfillment of their basic functions, Chinese peacekeepers can also be involved in other tasks related to protecting China’s interests abroad. In this way, in March 2015, they were involved in an operation to ensure the security of the Chinese diplomatic corps and protect more than 600 Chinese specialists evacuated from Yemen. This evacuation was carried out from the Yemeni coastal cities of Aden and al-Hudaydah, by the Chinese People’s Liberation Army Navy’s (PLAN) Project 054A missile frigates – Linyi and Weifang (Pennant Numbers 547 and 550, respectively), who were taking part in an anti-piracy operation along the coast of Somalia.

In accordance with a UN Security Council resolution, China, starting from December 2008, has routinely deployed PLAN warships to the Gulf of Aden and the territorial waters of Somalia to escort ships and secure freedom of navigation. The crews of the ships included PLA personnel who are actively involved in escort operations.

As of the beginning of 2019, China had carried out 31 deployments of warships to the Gulf of Aden, which escorted more than 6,600 of its own and foreign merchant ships and discovered and inspected about 3,000 suspicious water vehicles. In these conditions, the PLA military personnel carry out the following tasks: boarding and inspection of a suspicious vessels, liberating a captured vessel from sea pirates, emergency response and rescue in case of mechanical and medical emergencies, evacuation of citizens abroad, and participation in international exercises. In total, about 700 Chinese troops are involved in the operation to ensure the safety of international shipping in the region around the Horn of Africa.