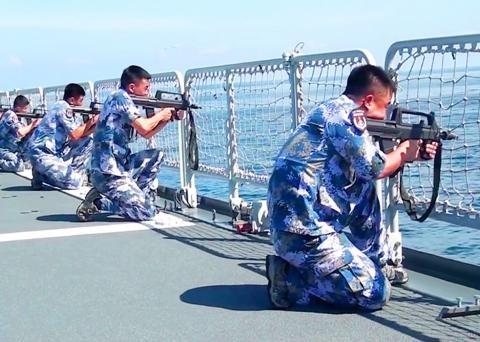 Two of the exercises are being held near the Paracel Islands in the disputed South China Sea, one in the East China Sea, and one in further north in the Bohai Sea, the Maritime Safety Administration said in notices on its website.

In the southern part of the Yellow Sea, drills including live-fire exercises will be held between September 28th and 30th, it said in another notice.

All ships are prohibited from entering the area, it said.

It is rare that several exercises happen at the same time, but it is likely a result of increased rhetoric from the side of Taiwan, as well as the approval of various weapons sales by the US.

In August, China announced four separate exercises, from the Bohai Sea to the East and Yellow Seas and down to the disputed South China Sea, in what Chinese military experts said was a rare arrangement of drills.

On September 27th, a US state department statement said China has “pursued a reckless and provocative militarization” of disputed outposts in the South China Sea’s Spratly Islands, adding that China’s governing Communist Party “does not honor its words or commitments”.

In response, Chinese foreign ministry spokesman Wang Wenbin on Monday said US military actions have made it “the biggest threat to the peace and stability of the South China Sea”.

China has also held frequent military activities near Taiwan, declaring that the drills were directed at the island Beijing considers part of its territory.

On September 25th, Taiwan’s defense ministry said China threatened to or entered its airspace 46 times in the past nine days.

In earlier September, an Indonesian patrol ship confronted a Chinese coastguard vessel that spent almost three days in waters Indonesia claims as an exclusive economic zone and are near the southernmost part of the South China Sea.