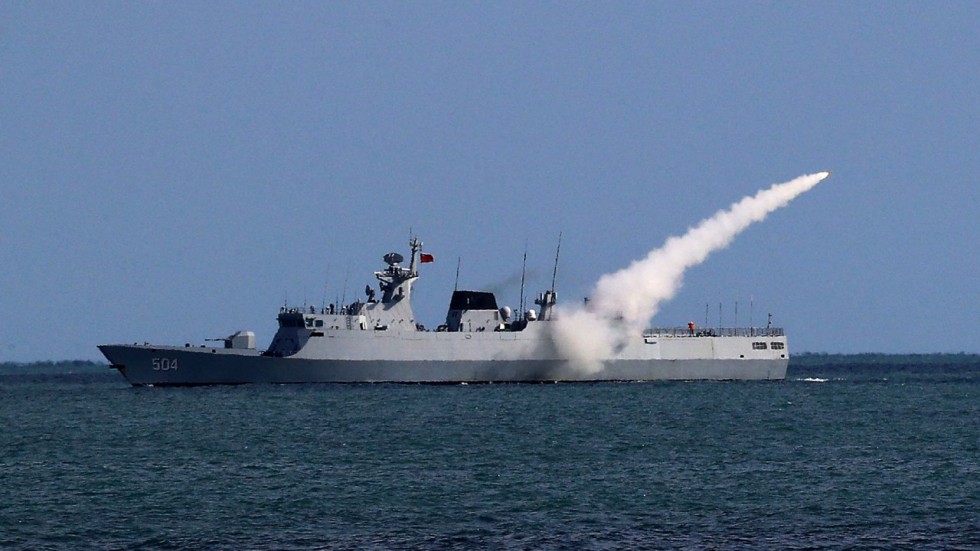 A Chinese frigate launches a missile during a naval drill in the East China Sea. Photo: Weibo

The Chinese People’s Liberation Army (PLA) Navy conducted a series of live-fire drills and formation maneuvers in a large show of force off Hainan Island in the South China Sea and nearby areas in the period between March 24 and April 11. The drills involved the Liaoning aircraft carrier and more than 40 vessels from China’s North, East and South Sea fleets.

Following the exercises, on April 12, General Secretary of the Communist Party of China Xi Jinping reviewed the PLA Navy in the South China Sea, saying that the need to build a strong navy “has never been more urgent than today”, according to the state-run news agency Xinhua. More than 10,000 service personnel, 48 vessels and 76 aircraft took part in the review.

On April 10, the USS Theodore Roosevelt conducted aircraft operations as it was passing the South China Sea on its way to Manila, the US newspaper Navy Times reported. In turn, the US Navy regularly patrols the South China Sea in an attempt to limit the Chinese influence in this vital region.

As always, China condemned the US navy operations. Foreign Ministry Spokesperson Hua Chunying accused Washington of having “violated the Chinese law and relevant international law” and “put[ting] in jeopardy the facilities and personnel on the Chinese islands”, according to the official statement on March 24.

On April 24, Xinhua news agency said the vessels, led by China’s sole aircraft carrier the Liaoning, “took part in anti-aircraft and anti-submarine warfare training” with a simulated “opposing force” in the Taiwan Strait.

The Type 001A is quite similar to China’s Liaoning aircraft carrier, a Soviet-built hull that Beijing purchased from Kiev in 1998. Beijing modernized the ship and commissioned it with the PLA-Navy in 2012.

Taiwan blamed the Chinese operations for “sabre rattling” and preparing for invasion to Taiwan. The Taiwan Defense Ministry stated that it would simulate repelling an invading force, emergency repairs of a major airbase and using civilian operated drones as part of military exercises starting next week, the South China Morning Post (SCMP) reported on April 24. The major part will be a live-fire field training exercise from June 4 to June 8, including “enemy elimination on beaches”, the ministry said.

For example, Taipei Times newspaper reported on April 20 that Taiwan Foundation for Democracy had released a poll asking what “if China invades Taiwan?”. According to the released poll, nearly 70 percent of Taiwanese “are willing to go to war if China were to attempt to annex Taiwan by force”.

All the events of the escalating tensions are conducted amid the shifting balance of power in the region, especially in the South China Sea. China’s construction of artificial islands with military facilities in the South China Sea, has sparked concern that it is establish its de-facto control over the entire sea.

The US, a powerful supporter of Taiwan and other regional competitors of China, is concerned about the Chinese capability of controlling the strategic waterway. Washington has repeatedly slammed the militarization of the Chinese artificial islands.

Commander of the US Fleet Forces Command Philip Davidson told the Senate Armed Services Committee in a written statement that the military urgently needs hypersonic and other advanced weaponry to defeat China’s People’s Liberation Army in a future conflict.

“In the future, hypersonic and directed energy weapons, resilient space, cyber and network-capabilities, and well-trained soldiers, sailors, airmen, marines, and coastguardsmen will be crucial to our ability to fight and win,” the four-star admiral said in written answers to questions from the Senate Armed Services Committee. “In the South China Sea, the PLA has constructed a variety of radar, electronic attack, and defense capabilities on the disputed Spratly Islands, to include: Cuarteron Reef, Fiery Cross Reef, Gaven Reef, Hughes Reef, Johnson Reef, Mischief Reef and Subi Reef.”

“These facilities significantly expand the real-time domain awareness, and jamming capabilities of the PLA over a large portion of the South China Sea, presenting a substantial challenge to U.S. military operations in this region.”

The Chinese jamming technology has already been used against the US military in the region, according to some sources.

“The mere fact that some of your equipment is not working is already an indication that someone is trying to jam you,” an EA-18G Growler pilot told GMA News on April 14, adding that “we [the US] have an answer to that.”

The military and diplomatic conflict is developing in the South Chinese Sea amid the worsening relations between the USA and China. The US imposed tariffs on certain Chinese goods. Beijing responded by imposing sanctions on 106 US products.  Both Beijing and Washington don’t seem to be willing to step back in the erupted trade war. The same attitude the powers have towards the South China Sea standoff.

Just asking, does someone know results of “China VS Taiwan” war games?

I would personally expect a repeated Afrin Operation. Slow, but inevitable advance.

If it ever came to that. Taiwan have already lost should the situation turns hot.

It is the “South China Sea”, isn’t it? Am I missing something?

MADE MAKER
Reply to  Jim Prendergast

no US are in South CHINA SEA

Jim Prendergast
Reply to  MADE MAKER

The US have renamed it as they did with the Persian gulf. In their stupid, dumb, fat Yank minds:

No, it is called the South China sea. Some years ago I was reading some old Chinese documents dating back over 1000 years ago, in which the document stated various islands and reefs as part of China. Admittedly they used Chinese names but the translation referenced today’s names. There have been various agreements (going back about 200 years) between France, Britain and China that ratified these claims.

The agreements you refer to (sovereignty over the islands in South China Sea) go back to, not ‘about 200 years’ ago, but to 1557 between the king of Portugal and the Ming emperor (and its ally Malaca and a myriad of sultanates), after three decades of fight around islands (Tamao etc.) and port facilities (Guangzhou etc.) for trade. England was still very very far from reaching those latitudes, let alone France.

Yes the brainless arrogant americans. Soon to be extinct.

As usual the US sits militarily right up to the borders of what it calls its enemies. And then freaks out when they engage in some push back. Imagine a guy walking up to you, standing right in front of you, pushing his face into yours. Then, when you push back because you feel invaded in your personal space, as any sane person would, this guy starts acting hysterically that your aggressive, and crazy. And starts pushing his face into yours even more.

The common denominator is the sense of ‘entitlement’ that these people have to other peoples property.

– “the exercises are a clear and tough signal to “Taiwan independence groups” and the US who are damaging cross-Straits ties…. “We still hope we can realize it peacefully, but if anyone tries to separate Taiwan, we will do everything we can to safeguard our national sovereignty and territorial integrity.”…. the PLA is preparing for a massive military operation to re-take Taiwan in the future. If Taiwan and the US merely treat the PLA’s action as a sign of deterrence, they are making a serious mistake.” (PLA’s live-fire drills in Taiwan Straits a warning to ‘independence groups,’ US, By Yang Sheng, GlobalTimes, 18/04/2018)

Chinese analysts have stated that as the U.S. is committed to pursuing the Taiwan partition project and the corresponding (and increasing) U.S. enhancement of Taiwan’s military capabilities, the enforcement of the One China policy may be required sooner rather than later. Recognizing the forms of U.S. military assistance, this assessment is likely correct (before Taiwan achieves more lethal capabilities).

In relation to the South China Sea claims, in addition to securing its territorial claims, the build-up of defensive military architecture by China is also in response to U.S.-allied war plans (China is developing anti-access/area denial capabilities to counter U.S.-allied close proximity fast strike operational plans and economic blockade capabilities).

– “The report [‘Australia-Japan-US Maritime Cooperation’ by the Centre for Strategic and International Studies] contains specific recommendations to enhance “inter-operability” on intelligence and surveillance, submarine and anti-submarine warfare, amphibious forces and logistics….. The report’s author, Andrew Shearer, is a senior figure in the Australian foreign policy and military establishment…. Shearer is also very well connected in Washington [and] makes clear [the] main “hard security” objective is to prepare for war with China. The Pentagon’s preoccupation with “freedom of navigation” and China’s A2/AD [Anti-Access, Area Denial] systems flows directly from its military strategy for war with China—Air Sea Battle…. Australia and Japan are central to Air Sea Battle and associated strategies, which include a naval blockade of China to strangle its economy…… [Air Sea Battle] relies on networked, integrated forces to take the offensive across air, maritime, land, space and cyberspace…..” (CSIS report argues for strong US-Japan-Australia alliance against China, 9 April 2016)

Note: In the event of kinetic conflict between Taiwan-U.S. and China, it is reasonable to assume the Russian Federation will back China in a form yet to be clarified.

I remember when Chaing kai Shek would behead a few communists in Taiwan to celebrate new-years.

a Prendergast responding to a Veritas Vincit when the Prendergast motto is Vincit Veritas (strong/strength Truth) or Truth will prevail.

China has claims to the world since “ancient times”. CCP trying to take over the world by “investing”. LOL

The usual chess game, the repetitiveness of it all really shows the overall stability of the situation.

The US has nothing on China.. This is forgone conclusion

The US is itching for Lady Karma to pay them a visit. It’ll be interesting to read in the future of the Chinese Navy patrolling the Caribbean to “limit” US influence in the region.

That’d be great to see.

Logical for the Chinese government to reclaim Taiwan especially when Taiwan isn’t prepared to abide by agreements. Taiwan happens to be a Chinese island and it’s residents are Chinese who lost their conflict against the communists but were permitted to live in peace and prosper on the island, provided that they stayed true to the agreement.

How many Wars America thinks it can lead at once, in the same time, against how many nuclear powers? Surely not this much. This is just talk to talk. Nothing much.