As the trade war with China rages with no end in sight, President Trump has continued to spout optimistic rhetoric, even if it doesn’t have quite the same market-moving potential as it once did.

But over in Beijing, where President Xi recently warned his people to “prepare for a new Long March”, the trade-related rhetoric has grown increasingly belligerent and antagonistic since Washington decided to blacklist Huawei. The commentary from senior officials appears to undermine the prospects for Trump and Xi hammering out a sweeping deal on the sidelines of the upcoming G-20 summit in Osaka. 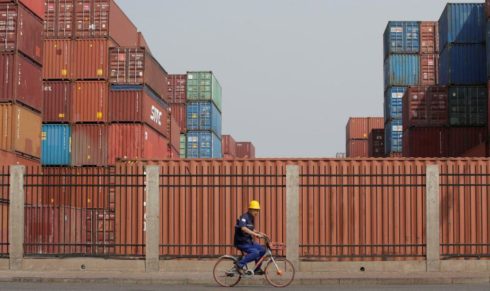 One senior Chinese diplomat lashed out at Washington on Thursday, denouncing the trade dispute as “naked economic terrorism” and “economic bullying,” and asserting that Beijing isn’t afraid of an enduring trade conflict.

“We oppose a trade war but are not afraid of a trade war. This kind of deliberately provoking trade disputes is naked economic terrorism, economic chauvinism, economic bullying,” Zhang said, when asked about the trade war with the United States.

During the press briefing, which was ostensibly called to answer questions about President Xi’s upcoming trip to Russia, where he will appear at the St. Petersburg Economic Forum, Zhang warned about the adverse impact on the global economy (perhaps a subtle clue that Beijing won’t come to the rescue with a ‘Shanghai Accord 2.0’).

Everyone loses in a trade war, he added, addressing a briefing on Chinese President Xi Jinping’s state visit to Russia next week, where he will meet Russian President Vladimir Putin and speak at a major investor forum in St Petersburg.

“This trade clash will have a serious negative effect on global economic development and recovery,” Zhang added.

“We will definitely properly deal with all external challenges, do our own thing well, develop our economy, and continue to raise the living standards of our two peoples,” he said, referring to China and Russia.

“At the same time, we have the confidence, resolve and ability to safeguard our country’s sovereignty, security, respect and security and development interests.”

Ministry of Commerce Spokesman Gao Feng warned during a different news conference that China “will fight to the end”, and that Beijing wouldn’t tolerate its rare earth metals being used against it – the latest threat to curb exports of the critical rare earth metals, a “nuclear option” that Beijing has readily embraced following the latest round of escalation.

At the same time, Beijing has reportedly asked state media companies to tone down their rhetoric, and what was expected to be a heated “trade war debate” between Fox Business host Trish Regan and a popular Chinese news commentator instead took the form of an amicable discussion.

Taking this into consideration, it would appear that Beijing is sending Washington a message: Trump and his senior officials aren’t the only ones who can play ‘good cop, bad cop’ on trade.

PhD Millionaire who called Dotcom crash, housing bust, and market’s surge since ’09 is now predicting a ‘cash panic’ in 2019. Here’s how to prepare.

You will squeal like a pig before they have finished with you. Americans and most others can’t even see the Chinese plan, and think that America is setting the agenda, such fools.

The chinks only have what we gave them , but they are brighter than the Russians .

and you arsehole are dumber than both :)

Ha you ignorant fuck! That moment in 1814 is in the us national anthem, bombs bursting through air, but our flag was still there! I know what it means! You dont.even kmow your head from your ass

The US has been committing economic and the other kind of terrorism my whole life, and in fact the US has always been a terrorist nation. Back in the old days, if you didn’t want to trade with the US, the US Navy would shell your country until you submitted. These days they destroy your economy, invade and execute your leader. It’s the American way.

All you falldowns want what we have for free NOT HAPPENING losers .

Trolling Turd you are the definition of ‘loser’ you pathetic, braindead piece of shit…

I doubt he is really from Canada… Probably just some butthurt Ukrotroll or maybe even another fake account of that Jacob Wohl Troll (including ‘White Patriotic American’ and a few other). He is one seriously disturbed individual – attention seeking psycho.

Sorry cant do that .

Because you not canadian?

Your so nice and courteous. I dont think he is canadian, look at the writing, im french and speak some english, i see no signs of either when he talks.

I bet hes is in lithuania.

Actually, it comes back to the Opium trade which was used to terrorize and destroy China. Only the times have changed, not the US evil modus operandi. US has lied and cheated its way throughout its sordid 200 year history of violence, wars, exploitation and slavery.

Even funnier, the same opium is now everywhere on our streets!! One would almost think china is.dumping that opium here on purpose as payback for 100 years ago.

But its not even that, its our governments and big pharma that pushed all these drugs on the market here, and for the financial gains of a few, misery for many vulnerable people.

Now i got fucking opiumheads breaking into my shed stealking my stuff.

It is time China grow a pair and confront Americunt warmongers and terror sponsor. Nuff said!

The west has always treated China and India as inferior coolie nations. The idea behind Bilderberg Jew corporations “globalization” agenda was to use China as a cheap slave manufacturing factory for the western consumers, but China became too big for its own boots, thanks to western consumers greed and propensity to buy cheap junk at Walmart. The Jews never wanted China, an Asian nation to become a “superpower” and now the rush is on to cut China back to size. Let’s hope China stands up to US bullying and creates alliances with Russia, Iran and other free nations.

I havent baught a thing at Wal mart in 6 years, except litter boxes for my cats.

You can blame “jews” if you wish, but in the end they are just a puppet as well.

I make jew.jokes all the time, in good fun, but i accept that its the puppet master responsible, not the puppets, i now pity them.