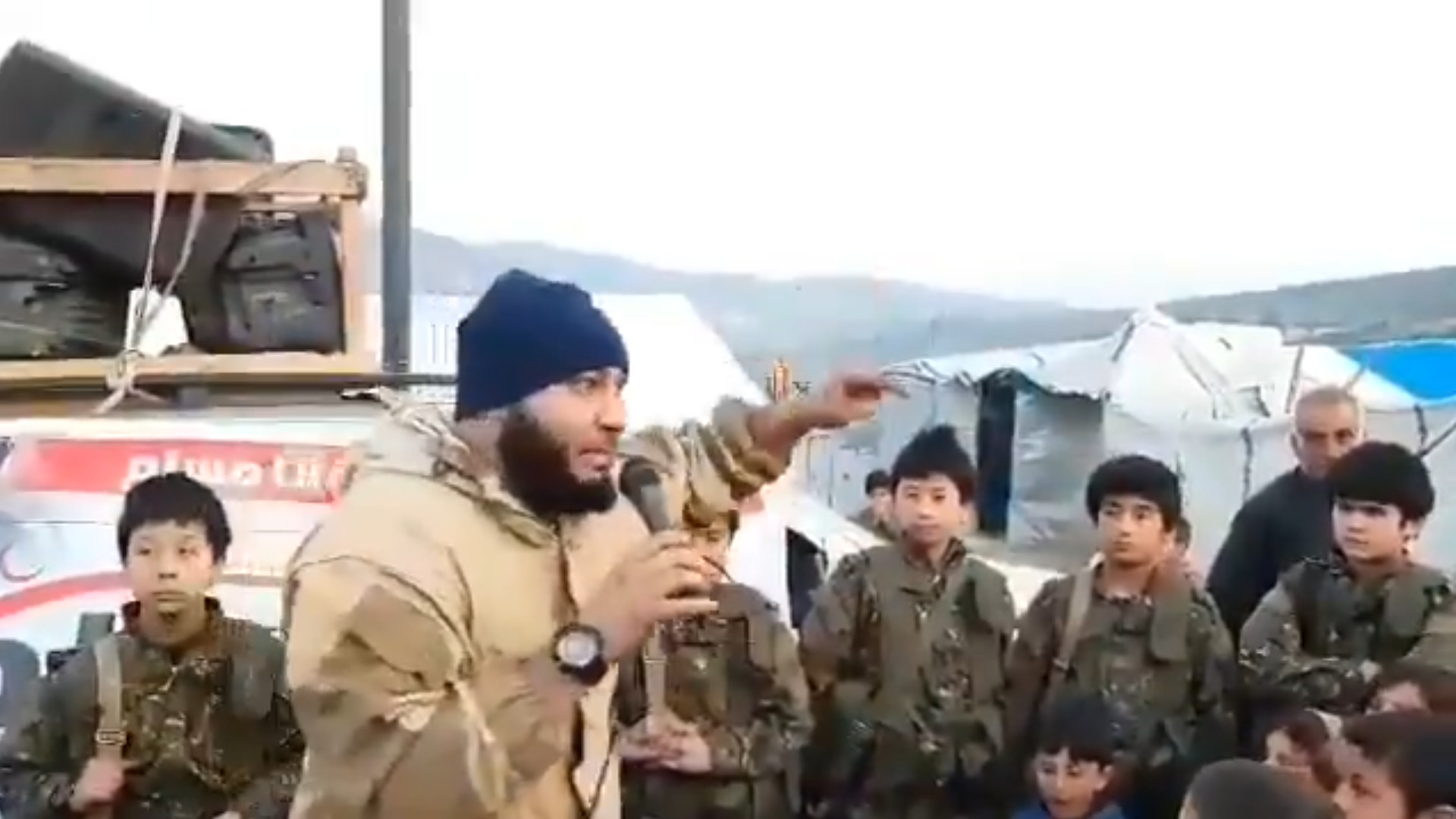 On February 26th, a Twitter user under the handle The’Nimr’Tiger, published a video purportedly showing Ahmad Al Qa’qaa, a member of al-Qaeda, in Idlib, Syria giving a speech to children and attempting to recruit them for jihad.

Watch him give a speech to children (most of them foreigners)

He tells them: "You only die once, so might as well die in the path of jihad"

Shortly after publishing his video, he was contacted by a Turkish supporter, “kindly asking” him to delete the video.

So I got this DM from Erdogan supporter asking me to delete the video because: pic.twitter.com/LWc8HIiOrF

The explanation is that he was talking to children about jihad as a joke, and the children behind him were simply playing a fun game, clad in camouflage and carefully listening.

This is in-line with other claims, such as the one by Ömer Özkizilcik, an expert at the Security Department at the SETA Foundation, a think-tank based in Ankara, Turkey.

He said that Turkey wasn’t supplying any weapons and equipment to militants, only to moderate opposition, but Hay’at Tahrir al-Sham terrorists simply “jumped in” the armored vehicles and picked up weapons, since they were purportedly being left idly when the Syrian Arab Army was attacking.

One can’t help but just allow terrorists to pick up arms and fight, after all it is certain that following the expected crushing defeat of the “Syrian regime” all militants will give up their weapons, roll over and potentially just die since they’ve carried out their one true goal: defeating Syrian President Bashar al-Assad.

Since Turkey began deploying weapons, equipment and troops to Idlib, according to Özkizilcik hasn’t been “one day” without a delivery.

If I'm not wrong there wasn't one day #Turkey hasn't send a convoy of reinforcements since Turkey has begun to reinforce #Idlib.

This night another one composing of armored vehicles, tanks, excavators and supplies entered Idlib. pic.twitter.com/oWUVAFwcEv

And since they’re delivering it to “moderate opposition” and doing nothing suspicious at all, they’re doing it around midnight on some days, as the video above shows.

Turkey also, under the Sochi Agreement, is allowed to have 12 Observation posts in Idlib, according to information from February 24th, it has 42.

In addition, since Turkey is quite vocal in media and Twitter about its military success, and that of the groups it backs in Idlib, it wishes for its content to be the only one available.

That is mostly due to the fact that, Turkey simply provides claims of its successes, in addition to no evidence and on the side of the Syrian Arab Army all claims are substantiated by photographs and other forms of footage and proof.

Thus, it would appear that users and websites showing photos of destroyed Turkish equipment, and showing proof that Ankara is doing less than stellar in Idlib are also being “kindly asked” to remove their content, or in the case of Twitter – the Turkish government is asking the website to ban the user or remove his content, since it allegedly breaches Turkish law.

Looks like, judging by the document in the attachment, there they want these photos to be deleted from many dozens of sites and accounts on social networks. pic.twitter.com/4AeH9K0fcj

one has to be blind and deaf , a madman who has lost all his senses or a treacherous Zionist pig, to come up with the idea and to the conclusion , that the Invasion and occupation of syria by Turkey would Benefit the Government of assad.

yes, but you see … the most common cases of child soldiers are encountered in the Islamic world … it is as if this is normal, but it is not!.. pointing to a wrong direction it is maybe your (paid) job…

If it is more frequent in Islamic world, we should ignore other locations? That is hypocrisy which my comment exactly says. Hypocritical commenting it is maybe your (paid) job. BTW you are forgetting the non Islamic African countries that employ/ed child soldiers on a massive scale.

hahahahaha!!!!…so you are either a devoted muslim or a far left brainwashed idiot…per your ‘standards’ to tell the truth about an evil ideology (i.e. islam) is something bad, and in case you are muslim, even to be punished by death, which is not the case for me pal ….you can call me whatever you want, I don’t give a shit, all I know is that islam made much more victims in the world than any other barbaric ideology…

PS…even much more victims than communism, nazism and judaism all together…just for the record, I am also communistophob and nazistophob. Is this a bad thing though?!…

True but thats not what we are talking about. We are talking about Child Soldiers. And you for some reason seem to say that as long as it exists in Islamic world we shouldn’t talk about other countries that do it. I don’t think in these cases it has anything to do with religion in a first place. Just manpower shortage. But well, if you see Islamic Evil everywhere you look that’s your paranoid brain’s problem

Just like the most pedophilia is perpetrated by Jews, as the Rabbinical Talmud teaches that even 3 month old girls are fair game. A diabolical people and satanic cult. As said by Jesus in the gospels. John : 8 – 4

That’s not a combat area you ducking Nazi p rick.

You are talking about that specific location or Donbass in general?

NATO member hypocrisy in plain sight and unreported in the Western Corporate and State Media.

Twitter, like all the tech giants, always bends over backwards to accommodate the nefarious regimes of the world. Yet loves to meddle and censor on behalf of the Insane Left in the West against the government of Trump.

dude you are still caught in the artificial left vs right paradigm? Truth is a bit more important.

Not Another Trafficking Organisation.

For yrs, many thousands Uyghur are recruited by CIA-Turkey in Xinjiang, smuggled out through Thailand border & Msia. When caught, Turkey Embassy rush over to immediate claimed they are Turkish, providing on the spot passport of one time entry. WTF thousands of Turkish, men & families, fly from Turkey to hide in Thailand & Msia border forest?

RT reported yrs ago RuAF bombed one of this Uyghur ISIS village. Erdog was protesting angrily said these are his kins…see he called ISIS terrorists his kins…