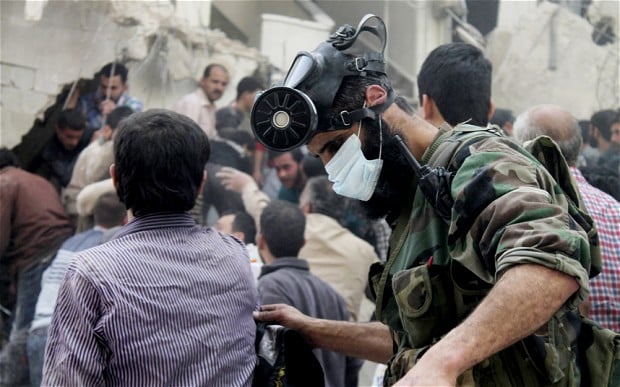 When it comes to the two verifiable uses of sarin or sarin-like substances in Syria, namely the 2013 Ghouta attack and the 2017 Khan Sheykhoun attack, nearly all the available evidence points to them being used by the rebels. An MIT study of the Ghouta attack that examined the ballistics of the rockets used to deliver chemical agents concluded that they came from areas at the time held by the rebels. When it comes to Khan Sheykhoun, by all accounts, including rebel ones, no aircraft sortied from the Shayrat airbase until several hours after the population of Khan Sheykhoun was exposed to chemicals. Even the photos and videos made available by the rebels put into doubt the claim the munitions were delivered by Syrian aircraft, as there is no evidence of air-delivered munitions and moreover the symptoms displayed by the victims and the behavior of the first responders suggests exposure to a toxic industrial chemical rather than a highly lethal agent like Sarin. And, possibly most importantly, such sporadic use of chemical weapons would represent the worst of both worlds for the government of Syria: on the one hand it would be violating one of the biggest taboos in today’s international politics, and on the other it would not be reaping any tangible military benefits from it. Chemical weapons in order to have significant effect must be used en masse, World War 1 style. Sporadic uses, particularly after recent Western warnings not to use them, make zero political or military sense. Such attacks, however, make perfect sense for various rebel groups whose only hope of victory or even merely survival is in provoking a Western military intervention that would turn the tide of the war. So why is the dominant Western narrative of placing the blame squarely on the Syrian government (and indirectly on Russia), even though no international investigator has set foot in Khan Sheykhoun?

The first casualty of war is the truth

The sad fact is that Western elites, if not Western nations, are for all intents and purposes still at war with Syria and their rhetoric, as well as fawning media coverage, must reflect this preference lest the masses begin to suspect something is amiss. Therefore it is no accident or coincidence that every atrocity or questionable incident not only in Syria but also Ukraine is attributed to Syria or Russia within the first half hour of its occurrence, before anything even remotely resembling an investigation has taken place. This was as true for Ghouta and Khan Sheykhoun as it was for the downing of MH-17. On the other hand, atrocities where the evidence overwhelmingly points at Western-backed forces, such as the 2014 massacre in Odessa or the beheading of a young boy by a US-armed “moderate rebels” in Aleppo are suppressed, reported in a distorted fashion, or barefacedly described as a regrettable exception that in no way undermines the motives of the perpetrators. What amounts to Western covering up for the rebel use of chemical weapons in Syria is also reminiscent of how the West turned a blind eye on Saddam Hussein’s use of sarin against Iran and later against the Kurds, as long as he was seen as a useful counterweight to the Islamic Republic of Iran.

While their project to overthrow the Syrian government has demonstrably failed, they have de-facto painted themselves into the corner so thoroughly that they cannot very well change their rhetoric, since doing so would be an admission of having pursued cynical and criminal policies all along.  And, since Western governments have locked themselves into conflict, their rhetoric

Whoever pays the fiddler calls the tune

The Russian government has time and again called for a transparent investigation of these incidents, but its requests are yet to be heeded by Western governments, and unfortunately the supposed investigations of the chemical weapons attacks by international organizations such as UN or OPCW unfortunately bear all the hallmarks of political influence by Western powers. This, too, is not an isolated phenomenon. Russia was singled out for its alleged state-sponsored use of doping by the IOC and WADA, even though there was no evidence other than the testimony of a disgruntled and disgraced former employee. As a result, these supposed investigations have been conducted without on-site visits and contain passages which display a high degree of ignorance of chemical weapon effects and behavior, but which are necessary in order to arrive at the pre-ordained conclusion. Thus, for example, the recent UN Commission of Inquiry report blaming Syria argued that the Russian claim the toxic agents could have been released by a conventional bomb targeting the rebel chemical stockpile was not backed by evidence, since the conventional explosives would have incinerated the chemicals thus rendering them impotent. However, it is a firmly established fact that conventional explosives do not generate the temperatures necessary to decompose, let alone incinerate, chemical agents.

The decline of the West

The deterioration of international organizations is linked to the decline of the West, which is now using every tool at its disposal to avert the emergence of a multipolar world order. International organizations are part of that tool set, in that they legitimize Western political and military dominance. The problem with using them in this fashion is that it threatens to strip the international institutions of whatever veneer of legitimacy they still have. Ironically, this could pave the way for a new set of international institutions more reflective of a world order rebalanced to reflect the growing role of other regions of the planet.

Obviously it is the terrorist cannibals of Daesh and Free Salafist Army carrying out the gas attacks. The puppets of NATO (Nazi Alliance of Terrorist Organizations), the Ottomans, Wahhabistan, GCC and Israel are the ones raping, torturing and murdering their way across Syria.

You follow the fairytale logic of good and bad countrys?

Assad Did Nothing Wrong™
Reply to  matt

Not sure how you pulled that garbage conclusion from his post. From a utilitarian perspective, allowing the jihadist mercenaries to win in Syria and make in a base for international terrorism is worse than Assad remaining president. Far worse.

Somebody that calls himself “assad did nothing wrong” is clearly very intelligent….

Assad Did Nothing Wrong™
Reply to  matt

I could change my name, but would you refute my point afterwards?

You got a point and i agree that assad is better then the towelheads, but the other guy was not making any sense, that is he uses a lot of unnecessary words that make him look like a fool

In what way is he a fool…..I’m confused you didn’t even argue a point

So, what will be your new name??

durimg your empty debates you have lost your face :)))

Some one who talks about fairly tales is definitively not very intelligent. Hoever, you can say it is definitively a Degenerate trying to Divert, Dilute and Confuse, the fact of Terrorists killing Children in the name of false nations and their interests : Saudi Arabia and Israel, both invented by the British Empire and now a days, pariah nations

Syria was also invented by the Brits and the French… Your accusations are false, i am a pacifist and certainly not a supporter of the USA, the saudis, israel.

TheLulzWarrior
Reply to  Assad Did Nothing Wrong™

What color is the sky in your universe? You say that all countries are equally evil? That there is no qualitative difference between Daesh and the world’s democracies?

Like the rainbow….. ISIS has no country, by the way

“When it comes to the two verifiable uses of sarin or sarin-like substances in Syria, namely the 2013 Ghouta attack and the 2017 Khan Sheykhoun attack, nearly all the available evidence points to them being used by the rebels.”

Except for Russia and Syria, noone beleive it was the rebel. Even Russia got tired on Syrian regim after they attacked with gas at Khan Sheykhoun

WTF are you writing?! Even Russia got tired on Syrian regim after they attacked with gas at Khan Sheykhoun I dont understand the Context you are trying to pull here.

Only CNN and BBC, Reuters, etc, etc….say that they “believe” !! Their readers believe that these Degenerates are employees of CIA, Mi6, Mossad, et all. If I where you I will be careful with what I write, since apologists of terrorists pay in the end !! (PD : Check your soup for Polonium, you never know !!) Be Safe My “Friend”

The only ones to have knowingly used any chemical weapon has been the rebels as it has been reported by Syrian and also NATO forces have been attacked by these same groups in Iraq using chemical weapons.

The OPCW is just a giant fraud which ignored it’s own investigators and an investigation by Carla Del Ponti conducted with sketchy Kassem Eid who turned out to be recommended by the US and CIA as an interpreter and happens to be Al Qaeda.

Kassem is a very well known member of Jaysh al Fatah an Al Qaeda affiliate in the communications wing. During the 2011 protests he was in Daara at the outset was one of the leaders from this group of foreigners who shut off the water which sparked the protest. It is also believed was one of the shooters targeting protesters and police alike in Daara.

His family lives in Germany and are Palestinians resided there for years he is 35 yrs old, where he was possibly recruited for his job in Al Qaeda by the CIA .