On May 6, clashes erupted between Turkish-backed Ahrar al-Sharqiyah and gunmen from the al-Waki family in the city of al-Bab in the northern Aleppo countryside. Syrian opposition sources said that personal problems had been the main reason behind the clashes, in which two militants were killed and more than twenty others were injured.

Ahrar al-Sharqiyah massed a large number of its fighters around al-Bab and even attempted to storm the al-Waki family district in the center of al-Bab. However, its attack failed.

Following the violent clashes, Turkey tasked the Ahrar al-Sham Movement with mediating between the Ahrar al-Sharqiyah and the al-Waki family in order to put an end to the crisis, according to the Syrian pro-opposition news outlet Enab Baladi. The source added that the tensions in al-Bab are still high.

This was the second security incident in al-Bab in the last 48 hours. On May 4, a commander of the Turkish-backed al-Hamza Division stormed the al-Bab hospital and threatened the staff and the civilians there with a handgun, also as a result of a personal problem.

In the aftermath of the attack on the hospital, thousands of Syrian civilians in al-Bab protested and called on Turkey to put an end to the Free Syrian Army (FSA) aggressive behavior. Although, the Hamza Division commander was arrested, the Turkish Army clashed with the protestors and even opened live fire injuring many of them.

Turkish Army clash with Syrian protesters in al-Bab city, can hear one protester telling a Turkish soldier ” this is my country, Syria, turn your weapon down” pic.twitter.com/D5TFppaE3q

The Syrian opposition held Turkey the responsibility for the acts of the FSA, as the Turkish Army have allowed many criminals to join these groups and have allowed them to move freely in the civilian areas in northern Syria.

In Photos: 15 Killed In Deadly ISIS Attack In Southeastern Niger

Maybe drop some weapons for civilians from helis? More areas will be red again.

The incident started when the FSA kidnapped a male nurse and tried to kidnap more at another hospital.

Crime and pseudo-anarchy is the real root problem in Syria. When violence is a normal way to settle disputes then anyone with a weapon (or just a big fist) can extort anyone without one. And whoever can command these fighters is king.

A very naive or cunning statement. There was no Tribalism when Assad was in full power. He executed fuckers who thought tribalism was king! Viva Assad! 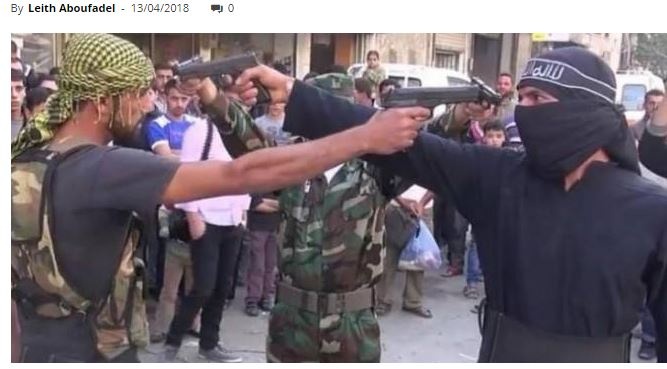 The left is CIA field agent.

There’s something fishy here the left guy’s hammer is not cocked the other is a striker weapon, the uniform guys guns don’t look like they would hit the side of a barn the way they are angled.

Click on the picture.
The guy in uniform in the middle is pointing a gun on both heads

This photo has been around for a year now I think. It set up for a photo shoot to depict the internecine madness of the terror gangs.

Yes I agree and the flood of liberated Syrian civilians all telling their real life accounts of what it is really like to exist under the boot of mercenary terror gangs ultimately supported by the USA/UK/France and Israel will soon be so huge that even the Western Corporate Media will be obliged to report it.

This is why the US Coalition of Terror is at its most dangerous now , as the US /Israel are having to show themselves being directly involved in barbarism.

FSA is peace of shit, they left Ghouta, Qalamoun, Yalda, Babila, northern Homs without fight, this is fcuking treason by rebels organisations, what happens with resistance? FSA commanders are horse shit

and this is bothering you why… are you a sympathizer?

I would love to shit on their heads!

and this is only the beginning

Each billet goes in good place.

Turkey’s noble little freedom-fighters are at it again, I think they need a time out.

There is nothing better in North of Syria lIke Idlibistan or the Turkish occupied places to see those Jihadists there to kill each other, just bring the Pop-Corn and enjoy, cuz soon or later someone will got insane or mad or greedy ot whatever and they will start off-each other for some stupid reasons like this gang to be the alpha gang etc. for money, power and many other things, on one place so many terrorists soon or later TRUST ME they will start to fuck eachother up.