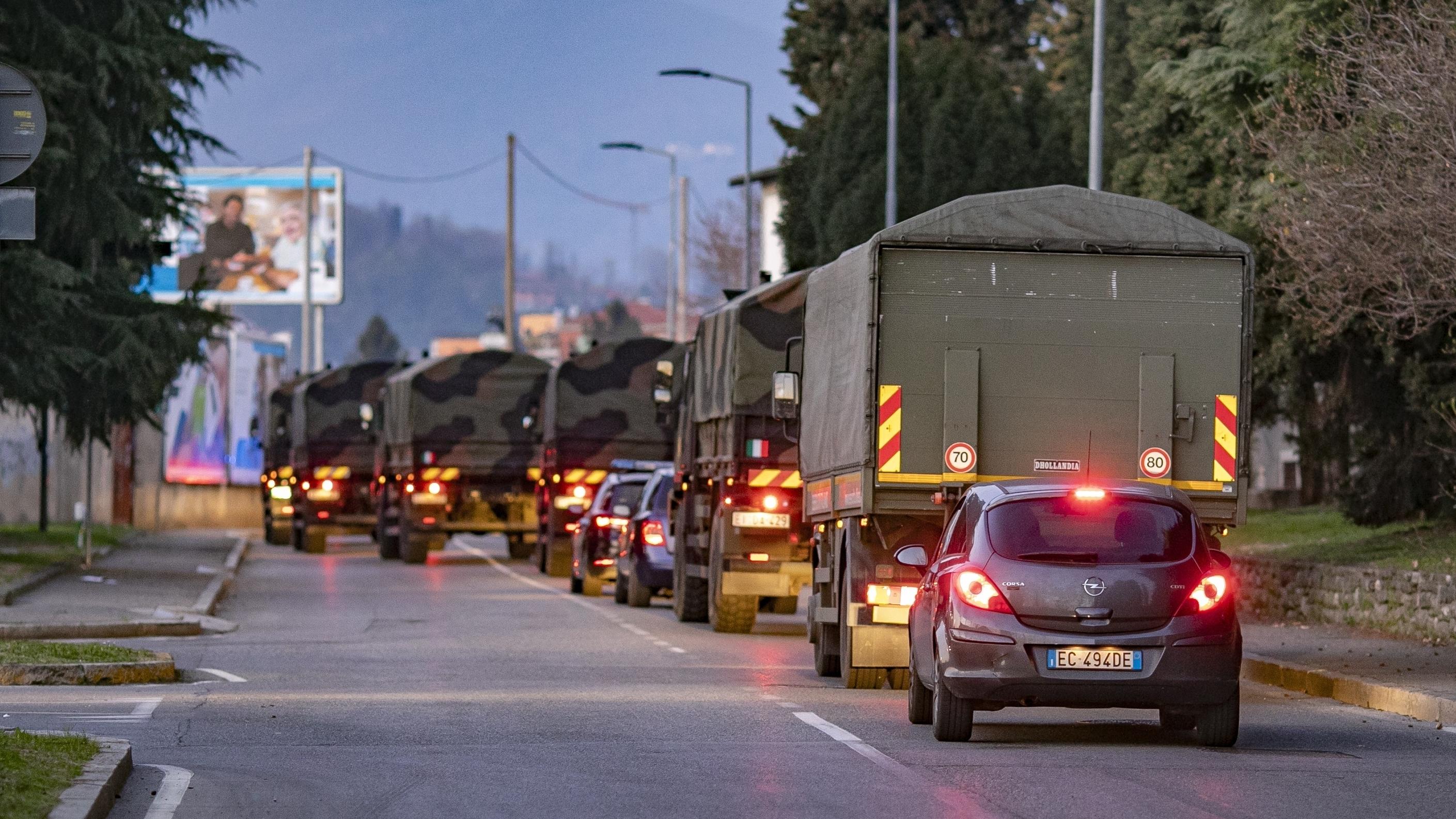 On March 19th, in Italy, in the city of Bergamo, province of Lombardy, authorities refused to accept patients with coronavirus.

The local crematorium is reportedly full of corpses.

On March 18th, Italy had the most victims to coronavirus in a single day out of any country. 475 cases ended fatally.

Most were from Lombardy, where Bergamo is located. Funeral homes are overloaded with work there, according to the local press.

Corpses are being moved out by military trucks.

A video shared online by the residents of Bergamo shows a long line of military trucks that drive through the streets of the city at night and load coffins into the cemetery.

Earlier, authorities in Bergamo asked for help from neighboring regions in the cremation of the dead, as the local crematorium cannot cope with the situation. Several municipalities in the neighboring province of Monza, in Modena and Emilia-Romagna, agreed to help.

An Italian military spokesman confirmed on March 19th that 15 trucks and 50 soldiers were sent to deliver corpses to neighboring provinces. About 60 coffins were delivered to the surrounding crematoriums, according to German outlet Bild.

The head of Lombardy, Attilio Fontana, reported the final collapse of the health system in his province due to an extremely large number of patients.

“Unfortunately, the number of infected people is not decreasing. In the near future we will not be able to provide treatment for patients,” he said.

Fontana called on citizens to observe a curfew: “Every exit from the apartment is a risk to you and others, we demand this sacrifice in order to save human lives.”

And Italians appear to not adhere to the quarantine. Tracking their mobile phones has proven that 40% of Bergamo’s population is still more than 300 meters away from their own home, as quarantine requires.

Meanwhile, the death toll from an outbreak of coronavirus in Italy rose in the last 24 hours by 427 to 3,405, overtaking the total number of deaths so far registered in China.

This was a slight improvement from the day before, and the newly infected as a percentage value of the total also appears to be decreasing, which could potentially mean that the infection peak is drawing near.

In the US, in some areas the situation appears to be spiraling out of control due to panic over the coronavirus.

The mayor of Baltimore is begging residents to stop shooting one another to allow doctors and nurses to focus on saving coronavirus patients and not gunshot wound victims.

In a statement on March 18th, the Mayor Jack Young said:

“I want to reiterate how completely unacceptable the level of violence is that we have seen recently. We will not stand for mass shootings and an increase in crime.

For those of you who want to continue to shoot and kill people of this city, we’re not going to tolerate it.  We’re going to come after you and we’re going to get you.

We cannot clog up our hospitals and their beds with people that are being shot senselessly because we’re going to need those beds for people infected with the coronavirus.

And it could be your mother, your grandmother or one of your relatives. So take that into consideration,” he said.

The US has upwards of 14,000 coronavirus cases, with over 200 fatalities as of the early hours of March 20th.

China, which has recorded 80,967 infections and upwards of 3,200 deaths, on March 18th and 19th reported not a single domestically-transmitted case.

It said that new cases are a result of travelers from the US and Europe.

On March 19th, China recorded 39 confirmed Covid-19 cases, all of them people coming from abroad, the National Health Commission said. The total number of imported infections now stands at 228, raising real fears of the second wave of the disease.

The coronavirus crisis is also revealing some notable factors for various systems, business fields and groups.

Such as the collapse of the healthcare system in Italy, and many other countries.

Globalists are also taking advantage of the crisis to push their own agenda. It also plays right into the hands of climate change activists, as it has reportedly improved the overall environment notable, since most people are on lockdown.
Various business structures are also facing a collapse due to the situation with the lockdowns in various places.

As an example, it turned out that 90% of fishing ships that operate in northern Russian waters are doing so from foreign ports.

Fishermen warned of the risk of stopping fishing in the Barents Sea. Russian vessels catching in the Northern Basin may stop fishing due to quarantine closure of foreign ports. If the lockdown lasts until May, Russian fishermen might lose up to 70 billion rubles ($900 million).

Almost 90% of the fishery in the Northern Fisheries Basin is produced by 80 vessels, which are referred to as the so-called non-entry vessels at Russian ports.

These are new vessels bought abroad, as well as those that are being repaired and serviced at foreign ports, since Russia does not have suitable infrastructure.

Most crews are now completing their voyages, which lasted three months, and, they will not be able to continue working or their labor productivity will be “extremely low”.

This is one example, of many various businesses that depend on various “tricks” to operate effectively, and cheaply, and the current situation caused by the coronavirus is heavily impacting their operation in a very negative way.

It’s just propaganda, the terror parade, how many trucks do you need to transport all those coffins in the real world? There is much to think about about the paroxysm of coronavirus.

What was the aim of covid 19 deaths propaganda by italy??

question… u think china is in on it ?

Italian mafia idiots… do not wonder….

scare people to submission… so they willingly accept anything u force upon them….

Have you seen special coffin delivery vehicle use by crematorium. Each crematorium may has only two or three at most which are already tied up in crisis. Not to forget many will continue to die in other illness during outbreak.

15 trucks is reasonable for 60 coffins, each carrying 4 glass top coffins without stacking up for respect. They can go on single trip instead of making multiple trip requiring complete sterilization each return wasting much time.

Don’t be too mean to these brave Italians trying their best to manage a serious crisis without any help given by EU. Wuhan has whole China provinces to support Drs & every resources, Italy is very much on their own except Chinese medical aids.

Italy is paying the price for allying with China’s One Belt initiative. The Americunts and Zionist scum targeted Italy with the coronavirus to set an example for EU. Italians are not bad people and should not have suffered this bio-warfare by the Americunt scum.

Italy had weekly planes full of cheap labor workers from china, so they imported a lot of this virus. plus the bad living conditions for the workers plus mafia controlling all the business… = actual situation

BS to the max. So what about France and Germany that are in full virus mode? or the dumbass Jews who are in lockdown themselves. Accept the FACT that the Americunt arseholes created this virus as a bio-weapon and now it has gone rogue. China and Iran have totally controlled and with Chinese help, Italy will get over it.

chinese workers have been in Italy for YEARS

You can read UNZ.com some commentatorusing handle utu made investigation into this qn. It turns out where most Chinese concentrated in Italy, is strangely not an infected zone. I will post link later if free.

Italy and Iran virus strands are also found to be different from China’s 3rd Gen “C” genome. There are 5 Gens ABCDE so far, A the origin, E the latest mutation. Only US has all 5 strands. Some infected Italians, Japanese, SK,…have never been to China or in contact with Chinese, but visited US, Hawaii.

These comments address some concern on high number of Chinese & SK living in Italy & Canada.

Canada has 5 times more Chinese than Italy but 62 times less infection cases and 539 times less fatalities than Italy…What if Italy was cast in the role of a decoy. To take away attention from China and Iran (*) and to take attention from speculations about biowarfare and the ethnically selective viruses that possibly were launched against China and Iran? What if the epidemic was faked in Italy?

Chinese in Canada who constitute 4.7% of population. They do not seem to be a vector. Actually 4-5 ‘vectors’ in British Columbia were from the Middle East. So if the Chinese in Canada did not create a vast epidemic so far can this tell us something about the nature of the epidemic in China?

Prato (in Tuscany near Florence) which has the highest density of Chinese population in Italy. Wiki lists 11,882 (6.32%) for Prato while the highest absolute number is Milan 18,918 (1.43%). So clearly the 2nd largest Chinese community in Italy (and first in density) with 21 cases (out of 12,246 cases in Italy) did not contribute a lot to the corona virus outbreak in Italy.

https://www.unz.com/article/was-coronavirus-a-biowarfare-attack-against-china/#comment-3776174 My point is that while Canada has huge Chinese population it does not look like China was the main vector. In BC it is Iran and Europe.

Italy was punished for 2 unforgivable sins to kiki, been too independent.

1) Joining China BRI silk road against ZUSNato warning. EU was angry Italy make them have less bargain power to blackmail Chinese. If Greece & Italy join BRI, who care about Belgium. ZUS want to threaten 80% China shipping trade in Malacca Straits with India in Adaman islands. With silk road, US lost even its competitive in trade.

KILL THE KIKE VIRUS & SAVE THE MAFIA !

Lol. You are always funny. I think my usage of kiki once even with wrong spell purposely got RT banned my account.

China could cremated all corpses by law during crisis, without allowing families to claim or hold funeral thus avoid outbreak. No hospital has resources to waste testing all deads for COVID.

But Italy been “human rts EU” needs to sent bodies to cemetery with coffins for family dignified burial ceremony & cremation. That will slow down & overwhelmed crematorium. It has to space 30min apart per burial ceremony to avoid families cross infection. Each cremation last few hrs or more to ensure safety.

Italy may not have that many crematorium vehicles to deliver 65 coffins. So army trucks convoy is only choice for security protocol sake.