The chaos that has engulfed the NATO summit is yet further confirmation of the world’s transition from a unipolar to a multipolar order, with the return of great-power competition and different states jockeying for hegemony. Trump is adapting to this environment by seeking to survive politically in a hostile environment. 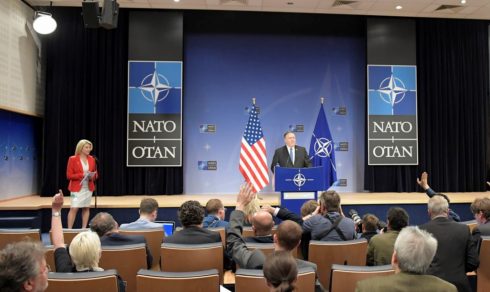 The meeting of the NATO countries in Brussels highlighted the apparent intentions of the US president towards his allies and the Atlantic organization. Trump’s strategy is to oblige the European countries to halt energy imports from Moscow and replace them with liquefied natural gas (LNG) from the US at a price that is obviously not cheap. The gas would come from the US by ship, entailing huge logistical costs that are not the case with regard to physical pipelines between Europe and Russia. This issue directly affects Germany and the Nord Stream II project, a deal worth billions of euros.

The reasons behind Trump’s behavior are twofold. On the one hand, we have the politics of “America First”, with the intention of increasing exports of LNG while boasting of “successes” to the base. The other purpose of Trump’s words is to highlight, sotto voce, the inconsistency of EU countries, who despite considering Russia an existential danger, nevertheless strongly depend on Russia’s energy exports.

To be fair to Trump, these same EU countries — fearful of Moscow but ready to do business with it — do not even spend 2% of their GDP on defense, while the US commits closer to 4%. For Trump this is surreal and intolerable. The NATO Summit began more or less with this anomaly, conveyed by Trump in front of the cameras to Jens Stoltenberg, the Secretary General of NATO, with Pompeo and the US ambassador to NATO on either side of him doing their best to remain impassive.

The photo-op with Merkel did not go any better. Needless to say, the American media is being driven into a tizzy. The headlines blare: “Trump betrays the allies”; “End of NATO”. CNN is in a state of mourning. Brzezinski’s daughter (yes, that Brzezinski ) almost vomited from the tension on MSNBC’s Morning Joe.

In truth, Trump is engaging in a lot of public relations. When he makes these performances in front of the cameras, he is speaking directly to his electoral base, showing that he is keeping his promises by putting “America First”. To be honest, it would be more appropriate to declare, “America, b****h!”

To back his words up with actions, he slaps his allies with tariffs and sanctions against Russia, and now Iran, incurring huge losses for Europe. He mocks leaders like Merkel and Trudeau in public, and has humiliated Macron in front of the world.

In practical terms, Trump does not care whether Germany buys LNG from the United States. If this is to ever occur, then it will take 20 years, given the cost and time needed to build dozens of LNG facilities on the European and American coasts.

The summit between Trump and Putin in Helsinki could even lead to more drama if Trump wants to drive the media, liberals, neocons and his European allies into further conniptions.

It depends on the issues on his checklist that he has to deal with before the November midterm elections. I do not rule out seeing Kim Jong-un in Washington before then, or a summit between the US, Israel and Palestine — anything that will play to the desired optics. The issue is just that: all image, no substance.

Trump is focussing principally on triumphing in the November midterms, and to do so he needs to look like a winner. He will be keen to ensure the moneybags of the Israel lobby and Saudi Arabia keep flowing. In doing so, he will probably even win the 2010 presidential election. There is always the possibility that the Fed and other financial conglomerates will decide to commit harakiri and blow up the economy with a new financial crisis in order to get rid of Trump. It would be the deserved end of the US empire.

European politicians also await the midterms with great anticipation, hoping that this will be the end of the Trump nightmare. They still live in the same dreamworld of Hillary Clinton, believing that Democratic victory is possible and that Trump’s election was simply an anomaly.

They will not have woken from their nightmare when they come to realize that Trump has increased the number of Republicans in the House and Senate. Perhaps at that point, with sanctions in place against Russia and Iran and with huge economic losses and the prospect of another six years with Trump, a coin will drop for someone in Europe, and Trump will be seen as the catalyst for breaking ties with Washington and looking east towards a new set of alliances with China and Russia.

In conclusion, we are experiencing the full effects of the Trump presidency, which is destructive of and devastating for the neoliberal world order. As I said at least a year before he was elected, Trump is accelerating the decline of the United States as a lodestar for the West, representing Washington’s swan song as the only superpower.

It is not “America First”, it is Trump First. There is no strategy or logic behind it. There are only friendships, his personal ego, and the need to remain in the saddle for another six years. Meanwhile, get your popcorn ready in anticipation of the Helsinki summit.

The USA elects its Presidents for 4 year terms – NOT 6 year terms. And that’s only one of the errors in this opinion piece…Geez…

You need to get your friggin’ facts straight if you want to be taken seriously.

You can call me Al
Reply to  Stephan Williams

Mid-elections !; the artical states that specifically.

What you could have picked on though was “in doing so, he will probably even win the 2010 presidential election. “

I am sure there is some alternate timeline where Trump will win in 2010 and it is probably from that timeline that the author draws his ‘facts’. I posted a response to S. Williams you may find of interest.

I shall try and find it, cheers.

Yes, I was also not impressed with the article. One thing I took issue with is the claim that Trump is acting entirely in his own self interest, that is, Trump first… second, third and so on and America basically comes last. I do not think so. Trump is part of the elite establishment and cannot act against the interests of those elites he is allied to. About six weeks ago I posted my thoughts on this very topic and I paste the most relevant parts below:

————————— To me, Trump is sane, rational and intelligent. I make no comment on his moral character, God will be the judge of that. I also believe there is method to Trump’s madness but to understand his madness, we need to understand his goals.

Trump says Make America Great AGAIN. Well say what you may, whether you love America or despise America, the United States is a great country by almost any measure. So does this mean Trump will tear down America and then rebuild a new and greater America? Yes, I do think that is what he means.

Trump has shown disdain for his allies, the treaties and alliances and longstanding relationships between countries and governmental and trans-governmental organizations. All of it, all that is globalist – the old globalists that is. Trump is draining the swamp, to make room for his own swamp. This is one set of elites replacing another. And the vision of the new ‘mandarins’ that will run the US is very different from what went before. And so, Trumpi is basically torching Us longstanding relationships on the world stage as they do not serve the interests of the new masters.

What will emerge from the carnage is a question yet to be firmly answered. Will the US return to a more isolationist position on the world stage as it was prior to WWII? Possibly, but One thing seems fairly certain is that the US will retreat to some degree as elites are recognizing the US is overextended and this is not sustainable. This will most definitely be a welcome development. Let us hope for the best and think positively. ——————————

We can see US retreat from having troops stationed all over the world in Trumps rhetoric. Trump has indicated he want to bring the troops home from Syria, Germany and South Korea. Such talk would have been unthinkable two years ago.

“Meanwhile, get your popcorn ready in anticipation of the Helsinki summit.”

The truest statement in the article.

If there is one certainty its that we are living in ‘interesting times’.

“To be fair to Trump, these same EU countries — fearful of Moscow but ready to do business with it — do not even spend 2% of their GDP on defense, while the US commits closer to 4%. ”

Eurotrash know they face ZERO real threat from a Russia that simply wants to co-exist peacefully with neighbors, so they begrudge having to spend more than the bare minimum on military crap.

The Murikkkan Imperium thrives on financial dominance, enforcing obedience by its vassals, and projecting power against the developing world. They spend far more than 4% once you factor in nukes, vet care, intelligence, home security etc etc and the expenditure is solely to maintain their bloated Empire.

You guys and girls want to have a Hearty Laugh? https://hooktube.com/watch?v=mchfQuYHKtg

I cried thinking how the EFF did she get into politics don’t people even check her background thoroughly or are they just a bunch of bleating sheep ready for the slaughter.