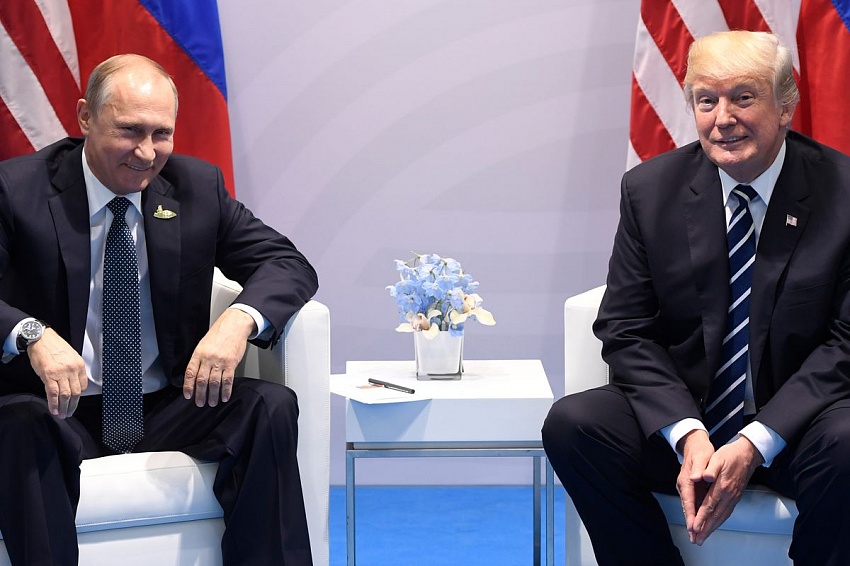 In expert circles where problems are discussed about the global development, increasingly slips in an opinion about the irrational and illogical behaviour of the major players in global politics and economics, which, as it seems to many, despite the rules of economic activities, seemed classic and immutable.

The not quite rational logic can be traced in the actions of the supra-national structures of the EU in energy questions, and, beyond the issues of relations with Russia. For example, in the attempts to artificially force the development of the new generation of renewable energy sources. This appears as more important than migration or continuing development and it also becomes the irrational “tolerance without shores”.

No less irrational from an economic point of view is the EU’s behaviour towards Iran: Washington (and to a large extent, Tel Aviv) quietly watching the escalation the anti-Iranian hysteria, the EU seems resigned to the loss of all economic dividends, which were gained by the EU and individual European countries after the lifting of sanctions on Iran.

Donald Trump’s decision on the resumption of the blockade of Cuba appear illogical from a political and economic point of view. Moreover these “irrational” actions are carried out on the background of a quite pragmatic “two-pass” military racket against the oil monarchies of the Middle East.

In recent years, the role of ideological factors in important global decisions has dramatically increased. Let’s look at the statements from the European political “heavyweight”, Germany’s Minister of Finance Wolfgang Schäuble, saying that Germany’s political priority (but in reality, all of the EU) will be the containment of Russia and China’s influence.

“This will be the end of our liberal world order. This order is still the best of all possible worlds for ethical, political and economic reasons. And we want this order to continue. At least, we do not want to see it weakened.” quotes Reuters Schäuble’s words. He also said that Europe needs to assume greater responsibilities to protect the liberal and democratic world order, since the USA show less readiness in this question.

For someone studying economic questions, the statement is an astounding example of a complete lack of economic considerations in the strategic approach, as well as a total prevalence of ideological considerations in the planning. This approach reflects the mood really dominating the European elite. Simply put, the ultra-conservative wing of the German elite, to which W. Schäuble belongs, voices these sentiments most frankly and clearly.

But how much this behavioural “irrationality” appears irrational, and not “misunderstood rationality”, rationality for new economic and social conditions? And what are the conditions, if the key countries and the world economies must fundamentally change their behaviour, in order to meet them?

Now we must at the same time observe a few “major projects”, which already begin to compete with each other, but not for the space. These projects, are mostly regional and do not overlap. The competition will be carried out for a place in the new economy and, above all, in the system of distribution of various profits (financial, technological, logistical, commodities), the basis on which a hierarchy of leadership in the post-liberal economy will be built.

This is the Chinese project of the zone of shared prosperity the “Great Silk Road”, and the construction of the “Europe of different speeds” (and different levels of social security), and the project of reindustrialization of the USA, behind which lies the attempt to reconstruct the pattern of American exploitation of Latin America.

Almost in all the regions of the world, not excluding the seemingly stagnant tropical Africa, we easily notice signs of “major projects”, which, sometimes in a competitive manner, major global players attempt to realise.

The exception, perhaps, is only in the traditional Middle East-East Mediterranean Sea, where the American global project, presumably, is collapsing and where the participants of the security processes are transferred to short-term tactical actions that are being implemented in the form of maximum commercial viability.

The «Non-Market» Logic of Global Projects

At the stage of reconstructing the system of global political and economic relations and communications the politicisation of processes is unavoidable, and attempts by independent groups of players “to play the long hand” for the sake of possible hedging (complex activities, allowing the avoidance of financial losses, for example, the “EE”) investment risks on a commercial basis.

The ideological approach to the economy, of course, has some costs (for example, it can clearly be seen in the example of the EU and Iran relations). But in practice it is a tool for hedging long-term risks in the implementation of “major projects”. Especially considering that the “major projects” are realised at a relatively high level of political and military risks.

It is naïve to expect from the major global players to implement the major projects and basing them on a “market” base. These expectations reflect the old political and, most importantly, economic mentality.

The “new rationality” in the global economy includes the use of ideological factors as a tool to consolidate allies and ensure the loyalty of economic elites. The “ideologisation” of economic decisions becomes a tool to the return of economic long-term planning, almost lost during the period of domination of the financial-investment version of globalisation.

It is clear that a major project is almost never implemented on a basis of the classical “market” principles for calculating profitability. A major project is always part of the “projected economic reality”, which is almost impossible to calculate. And the ideological factor as an element of “projected reality” allows us to consider many non-economic and even some economic risks as strategically insignificant.

The Chinese global project “The Belt of Shared Prosperity of the Silk Road” can be viewed as an interesting example. In the course of ten years the road went from being a fully classical and “rational” logistics project to the idea of a “belt of shared prosperity”, the “market-based” component of which appears significantly more opaque and unpredictable, if one approached it from the classic “market” point of view.

The important factor to give to the “The Great Silk Road” project, fundamentally different of the geo-economic content, is the emergence of the ideological component, which so far is “wired” into the formula of “common prosperity”, but this is only for now. The new status gave the opportunity to look differently at the questions of medium-term profitability of the project, although the Chinese approach with their partners did not spare relations from traditional flaws.

The Ideological Call of the EEU

At a minimum, Russia attempts as well to outline her “major projects”, linked with the consolidation of the economic potential of the New Eurasia and the formation of the Southern vector “North-South” of development in logistics and industry.

One of the foundations of this “major project” is the Eurasian Economic Union (EEU), which was conceived and implemented as a purely economic union. However, it appears, it creates problems in the development of the Union.

In the absence in the political union component (essentially, ideological), the EEU cannot make a qualitative leap in its status and influence. There is the permanent risk of collapse to the level of “free trade zone”. Russia and other member countries of the EEU try to build a system, a strategically important institution in the emerging context of the “new rationality” based on the approaches of “old” rationality characteristics.

Thus the participants of the EEU do not consider the factor of increasing indoctrination, not only in strategic, but practical as well, in operational decisions.

The key challenge is that, if current trends continue, the New Eurasia, at best, can stay as an unconsolidated space of “industry of second modernisation”, integrated in the global chain of raw materials processing at the level of low technological repartitions.

In the worse case, a significant part of the New Eurasia could turn into just a logistical space. Moreover, this risk manifests itself already, with the development of the dialogue between the elites of the post-Soviet governments and their Chinese partners, engaged in the area of their global project based on the “new rationality”.

It is precisely in the New Eurasia that contradictions between “rationality” and “ideolisation”, which has the same rationality, only multiplied by a medium-term vision of the situation, will acquire the most acute forms. This is due to the traditionally complex and ambiguous questions of human rights, humanitarian development, ecological issues and a few others, which, in fact, are a basis for the so-called “irrationality”. And that, of course, will be used in the competition for the leadership in the new global projects.

In these conditions, the countries of the New Eurasia will inevitably raise the question of rethinking the paradigms of national development and strategic planning, which were the basis of their development during the last 25 years and which, obviously, begin to lose their relevance.

The Jew world order is convulsing in an anti Trump feeding frenzy. A Jew pedophile cult member of congress just filed articles of impeachment against Trump in the US legislature.

“This will be the end of our liberal world order. This order is still the best of all possible worlds for ethical, political and economic reasons. And we want this order to continue. At least, we do not want to see it weakened.” quotes Reuters Schäuble’s words.

Liberal world order as you allow hundreds of thousands of Muslims in your countries and many have no desire to tolerate Christian religion, country customs or learn skills to get a job? My God, these people are mad.

The Zionists and NWO maniacs are carefully assessing that Silk Road, rise of China, and cooperation between Russia and China. They would rather have a world war then allow other players to rise. It’s all about control. Decent people stuck in the middle.

Janet Yellen made a fair assessment of the Western Market Economy stating recessions and bare market scenarios are a thing of the past until the fundamentals of the capacity to supply changes, that’s probably true, all the market has to do when the monopoly stage is reached is the create a necessary scarcity, the 08 great recession came about because wealth was being given out, Yellen is adamant not to repeat the same mistake, so if Russia and China want to be first rate contenders as powerful players they have to confront the substance the US $ which is basically a tribute demanded by the occupying power, talk sweet nothings all they like to the US rank and file and they will be patronized but little else.

A base , possessive mind produces greed , the idea that if others do well , I am , operating at a loss .

Stepping beyond that , the Chinese realize , if others do well , I also do well . There are more millionaires in China today , than in America and Europe combined . It is a vastly wealthy planet , and we are all creative , it should be an interesting “Silk Road” .

If you want to contain Russia – especially in Ukraine – then you just need to get Hillary Clinton elected. Have the Pinchuk Foundation steal $25 million of IMF reconstruction loans meant for the people of Ukraine and ‘donate’ that to the Clinton Foundation. Whoops! Guess THAT was an epic fail. I wonder if the Clintons will give the money back to the Ukrainian people? Ukraine still has to repay the IMF either way. I guess regime-change IS a profitable criminal enterprise.