On the morning of February 6th, a Palestinian man rammed his car into a group of Israeli soldiers in Jerusalem, injuring 12.

One of the injured is in critical condition.

The Israel Defense Forces were in pursuit of the man, as of the latest tweet.

Early this morning, a Palestinian rammed his car into a group of IDF soldiers in #Jerusalem. The #terror attack injured 12 soldiers, one of whom is in serious condition.

We are currently pursuing the terrorist. pic.twitter.com/ZqnQWmXtyN

Just hours prior, in the early hours of February 6th, the IDF struck Hamas positions in Gaza, since it holds the group responsible for the unrelenting launching of mortar shots and explosive balloons into Israeli territory from the city.

In response to mortars and explosive balloons launched from #Gaza into #Israel over the last day, our Air Force just struck a number of Hamas terror targets in Gaza.

Hamas allegedly supported the car ramming, and on February 5th, urged Palestinians to ramp up their confrontations with Israeli troops, after Israeli security forces shot dead a 17-year-old Palestinian, who the IDF said threw a Molotov cocktail at troops during clashes in the West Bank city of Hebron.

“We call for escalating confrontations with the occupation and its settlers and fighting their assaults against the land and holy sites, especially the blessed Al-Aqsa Mosque,” Hamas said.

The Palestinian Authority Health Ministry identified the teenager as 17-year-old Mohammed al-Haddad and said that he was shot in the heart.

According to the IDF, al-Haddad hurled a firebomb at soldiers at the entrance to Shuhada Street in the flashpoint city in the southern West Bank.

On the morning of February 6th, a 19-year-old Palestinian died during confrontation with the IDF in the West Bank city of Jenin, six others were injured.

There has been a very apparent surge in violence since US President Donald Trump announced his “Deal of the Century” peace plan that is incredibly biased towards Israel.

The plan has been criticized as heavily favoring Israel and not going far enough to prevent future expansion settlements. It also recognized all current illegal settlements as sovereign Israeli territory and sets out further annexations.

A real war of national liberation in Palestine is the only solution to the Jew vermin problem. These are very brave freedom fighters who risk all and fight back.

Mostly they lose and collect their Darwin Awards. Try to get the simplest things correct.

The vermin Jew publicly torture and murder unarmed Palestinian demonstrators every week. Israel needs to be dissolved and replaced with a dejudified unified Palestine.

Well get to it, kid. Stop spouting and get fitted for your suicide vest. And do practice a lot.

It’s already started with hammering a dozen IDF sites in the Golan.

And what fantom attacks are these, kid?

Ae you lying, ignorant, insane or all of them?

“Ten Israeli military positions in the Israeli-occupied Golan Heights were targeted overnight Wednesday by rocket fire at a time when Israel hit Syrian positions in the southern province of Qunaitera amid heightened tension, according to the pan-Arab al-Mayadeen TV.

LOL…Xinhua who? And that article is datelined from over two years ago! And no Israeli casualties or serious damage noted if it even happened. But note, since that time Israel has bombed your friends a hundred times with absolute impunity and sent many dozens of them back to Islamist Iran and Lebanon in body bags. Oh, and which of your fantasy coalition has nukes? You truly are delusional and in need of meds, Junior.

The Russians have nukes moron. Your rejection of factual history shows what a lying head case you are.

We will find that bastard and kill him, next step we would deport his fucking family back to Jordan. Payback is just a mater of time.

You people never learn. You haven’t had peace in 70 plus years. And never will with your evil cult ideology. Which is why Israel and Judaism belong in the trash can of history.

Shut your fucking mouth, your Pali friend will soon be dead, our SOF are chasing him as we speak and he has nowhere to hide. I will let you know when the chase is over.

The original Canaanite tribes, from whom the Palestinians are the primary descendants, got rid of Jews and Judaism. Morons like you are an example of why they did it. History is not on your side.

History will be written by us Israelis, the Holy Land will once again be united under the Jewish people.

Every nation on this planet that votes against you, with the sometimes exception of the US, says otherwise. If you think that Americans are going to continue to die for Israel. I wouldn’t count on it. You’l then be sol.

What Americans die for Israel other than some Americans who joined Israel in their fight against your friends? Most every nation legally recognizes Israel and there has never been a legally binding vote against Israel in the UN. However, there have been almost a dozen legally binding UNSC resolutions against your Islamist Iranian friends. And one of the reasons Israel has those couple of hundred mostly thermonuclear missiles is just in case it ever needs to go it alone in an existential situation. Try to keep up.

I wouldn’t even attempt to debate UN resolutions and international law with a habitually lying irrational head case who rejects factual evidence like you do. You can’t have a rational debate with a irrational moron.

Do you have a death wish, are you planning to off yourself? 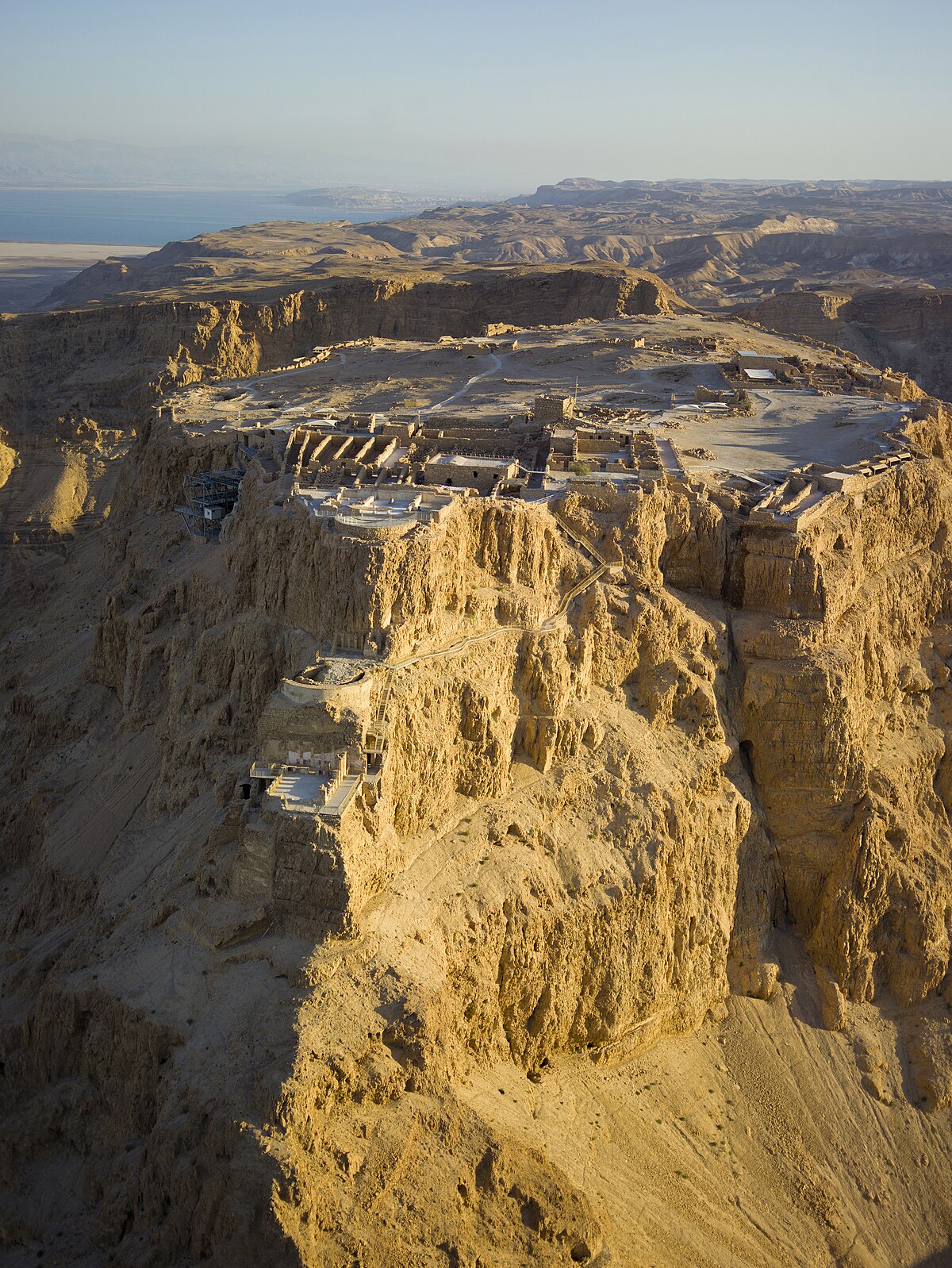 That pictures shows our courageous battle during the Jewish–Roman War, we would rather die than leave our land to the enemy. Palis will get nothing if they continue that path.

Is committing mass suicide via self immolation your idea of courageous battle? And who is we? The Palestinians are by far the primary descendants of the original Hebrew tribes, and they almost a person reject your evil cult. Which is why they got rid of Judaism in the first place.

Religious terrorism and extremism – invented by Jews (the Kitos war for example https://en.wikipedia.org/wiki/Kitos_War). Hadrian was so close to eradicate that evil forever…

The Jews were genocidal in their rebellions and suffered similar fates when the pendulum swung the other way. Judaism should be outlawed.

And who will make that happen? You?

People tired of your crimes, as has happened many times already.

What California crimes are you talking about? Oh, we did steal Ohlone land around here a few centuries ago. And the Ohlone have as much chance of getting it back as the Palestinians have of removing Israel. Don’t like it? Tough.

You’re insane, babbling on about California and Ohlone.

You again accuse me, a Californian, of some crimes. And I could only think of what Californians did to the Ohlone a few centuries ago that fit your meaning. And pointed out the fact that the Palestinians have about as much chance of getting rid of Israel as the Ohlone have of getting their land back. That is the reality. If you don’t like it, tough.

You’re the one shilling for the evil blood sucking Jew pedophile mass rape cultists, not me.

Hey, schmuck, you forgetting the here and now? Those folk you are afraid to fight yourself, do have a really strong military and a lot of nukes. This isn’t the old days.

You almost lost in 73, your nukes won’t save you this time around. If you use them preemptively you may get incinerated in a counter strike.

California didn’t fight in 73 as far I noticed here. And almost lost doesn’t mean much in a war that Israel had to be told to stop just before it won. Oh, given who heads the governments in Israel and the US today, whoever attacks Israel today better be ready not to have Israel stop before finishing them off if they like. And who did you say will counter any Israel use of nukes? You, kid?

You’re a imbicil. California has nothing to do with it.

Hey, junior, you are a true nut case with some fantasy coalition with nukes attacking the Israelis in the Golan. Oh, and accusing me, a Californian, of almost losing some war in 73.

You’re clearly an irrational habitual liar. The attack on the Golan is recorded history and the Russians have nukes, your rejection of these obvious facts shows the extremes that you’ll go to to lie and make a fool out of yourself for the evil blood sucking Jew pedophile mass rape cult that you shill for.

The same regional coalition with nukes that hit 10 IDF sites in the Golan. Except it will probably be larger.

LOL…And what fantasy coalition is that? You truly are delusional.

Holy Land is only for christians. For jews nothing is holy.

I agre with you. Under vatican unite the holy land. oasis for all nations and religions. land without weapons.

According to the UN Indigenous People’s list, the only remaining Indigenous People there are the few thousand Samaritans who are culturally and genetically closest you the Diaspora Jews. The Arabs are invaders, interlopers and imperialists from the Arabian Peninsular. The Canaanites were primarily the Phoenicians who were the Sea People from Europe. Oh, so far Zion has a few thousand years of history on schmucks with ear laps like you. And their couple of hundred mostly thermonuclear missiles means history still gives them a really big lead over losers like you and yours, junior.

Why would any rational person believe a habitually lying Zionist shill like you without credible proof, do you have any?

You didn’t answer the question moron.

But you have to admit, he is an impressive bowler.

He is a fool, he will pay as so does his family.

Working with anger is not a long term solution. You have to try something else.

His family? you sick PoS. Another proof you zionazi degenerates are the real (and only) terrorists.

Well, he did use his families car with his Mom’s permission and blessing. Guess they will need to find not only another car but another house. Those old Ottoman and British laws are so interesting.

UPDATE: The bastard was caught. Now he better beg for mercy.
https://www.jpost.com/Breaking-News/Three-injured-in-Jerusalem-ramming-attack-report-616681

It won’t change a thing. You morons are your own worst enemies with the evil cult ideology that you use to justify your anti social behavior and crimes against humanity. It’s why you’re pariahs.

You have that backwards, you schmuck with ear laps.

Do you get paid to post lies and stupidity?

hahha you will be collecting your welfare check in California arsehole JEW PUNK and watching your mom playing with herself :)

he did not kill anybody, you want to kill him.

Under the law of most all countries, attempted murder can be met with deadly force. Try to get the simplest things correct.

Rebels need to get back to the good old AlNusra days, those were the days of old.

AlNusra is americ7cks, putins, that fatman and that geezers worst nightmare. c7cksad needs his wife hanging from an olive branch for apostacy, as a symbol of apostacy.

Everyone should visit IDF’s twitter account and point out their vile propaganda there. If you care the least you can do is write and shame those liars.

WOW, that will really scare the IDF.

Guess the Palestinian leadership and their Arab enablers should have agreed to a Palestinian State 75 years ago. But no. They made war in the hopes of getting it all. They lost big time. They keep making the same stupid mistake time after time. And so we have the pathetic incredibly shrinking potential Palestinian State. They will do the same again. But next time they will get their second Nebka. And Israel will be from the River to the Sea with a solid Jewish majority. And there will be lots more Palestinians in Jordan and Europe.