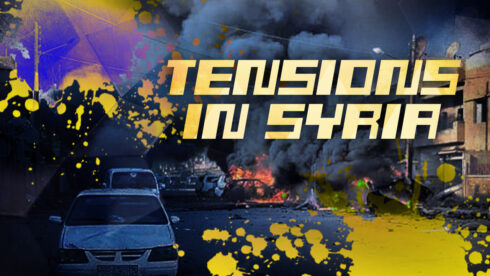 Up to now, the situation in Syria seems to be like a careful observation of the Ukrainian crisis. It is exactly the same to the rest of the countries that have direct ties, whether politically, economically, or militarily with any of the involved parties. According to the given facts, many countries will be badly affected in one way or another if the rate of imposing sanctions between Moscow and the West escalates.

The situation in Syria indicates that the USA  by its tools will take a kind of action that would put pressure on Russia. On the one hand, Israel escalates the bombing operations on locations it claims to be Iranian military posts in Syria, the last of which was this morning resulting in civilian victims in the south of Damascus. This attack was preceded by an attack carried out by ISIS on positions for the Syrian Arab Army (SAA) in Palmyra in the countryside of Homs resulting in 13 martyrs and 18 injuries by targeting an overnight stay bus.
The Syrian Ministry of Foreign Affairs denounced the Israeli attacks pointing out that it had happened coincidentally to ISIS attack which reflects the extent of coordination between these two attacks.

These attacks were also preceded by a post on Twitter for the US embassy in Damascus denoting that March would be the month of settling accounts telling the Syrians to share that hashtag.

Moreover, that came in coincidence to moving members of ISIS organization and other groups trained by the USA from “Al-Tanf” base to Idlib and to Ukraine. There are pieces of information saying that 242 ISIS militants have arrived in Ukraine amid news about the Turkish-backed factions establishing centers to register names of militants in Syria’s north to fight the Russian Army.

It seems that the situation is heading towards more escalation according to the given facts; the increasing activity of ISIS organization in the Syrian desert, Al-Badieh, following the incidents of Gwairan prison, which is under the US-backed SDF control, and the increase of the number of Israeli aggressions at the same time.

What happen to Syria is pure evil. Pure pure evilness. To bomb the Ukrainian military bases will not change this pattern. Bombing Taiwan’s military will not change anything too. So what are we suggesting here?

Bombing the Ukrainian bases will very much change the pattern of the US hybrid war against Russia. I do not cleave to populism nor nationalism, but with the annhilation of socialism across the globe, nationalism and populism are the sole obstacles to global late-stage finance capitalism. For over two decades, there has been a push inside the US to conflate populism with white supremacy. This strategy became plainly discernible at the time of the Ruby Ridge affair, and the subsequent OKC event. The US conflates Russian nationalism and the rejection of the globalist coup of 2014 in the Ukraine. Donald Trump is a sociopathic degenerate swindler, but he and his handlers recognized the state of the besieged middle and under classes of the US. The internal strategy has been to consistently tie support for Trump with violent white supremacy. The Americans are planning a guerilla war in the Ukraine that will be fought by “white supremacists” trained and armed by NATO. A clue about the nature of this is the fact that Azov is not composed of Ukrainian nationalists, but rather by Nazi kooks from a variety of backgrounds. An instrument like this can be turned on anyone, at any time. The US el kaydahs and ISIS stooges could be used in Afghanistan one minute, Libya the next, and then turned loose in Syria. A relative of mine used to hunt with a high-evel special forces member who, when discussing Afghanistan and Libya and Syria, said that they had captured the same guys in different wars. Nobody brought up bombing Taiwan here but you.

The suggestion is that there is a divide of civilised people vs Terrorists. It’s only an action carried out for the benefit of one group. Where do you stand Tommy?

Syria is not alone in fighting terrorism. Even without Russian support, the SAA can count on Hezbollah, Iran and Iraq PMU help.

Time to bomb the shit out of the Americans in occupied Syria.

Not yet, but the time is coming.

Nope. There the card were shuffled long ago. But there is again endless possibilities of a new proxi war. Russians can arm the inside Turkey kurds to punish the grease-man Erdogan being such a hypocrite. Assad can again open the prisons and release tens of thousands of takfiri’s fighters and send them against G.I. Joe’s oil areas. And so on….

The ‘Ides of March’. Time for the Satanists in Washington to settle the debt…..I mean score. Just like the Romans did centuries ago….

Expect it to happen next week.