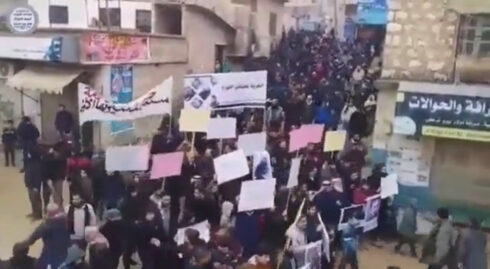 Protests against al-Nusra Front in Deir Hassan town in the north countryside of Idlib have renewed.

The source added that the protesters went out in front of the “The Great Mosque” in the town and raised slogans denouncing the arbitrary detentions carried out by al-Nusra.

The source clarified that the protesters have raised slogans like “release the detainees” and “detention will not break us” denouncing al-Nusra’s behavior, which they described as muzzling and quelling everyone who criticizes its policy.

Citizens of #Idlib’s Deir Hassan village took to the streets again to protest against the #HTS demanding the release of detainees pic.twitter.com/3LOMdCwUfM

Al-Nusra’s militants keeps arresting everyone who criticizes their behavior, especially in “Deir Hassan”, which is considered the resistance nest against al-Nusra’s practices against civilians.

On 21st last January, the locals protested calling for the release of the detained in al-Nusra’s prisons, after which al-Nusra’s militants arrested two of the protesters after tracing them out of the town charging them for participating in the demonstration, while their fate remained unknown.

It is noteworthy that areas under al-Nusra’s control, in the northwest of Syria, are still continuously witnessing protests against its behavior, that al-Nusra’s militants usually meet with quelling, arresting and using arms to impose its policy on the civilians.