Donbass, we’re on our way.
Once again the border, customs, grim reports, estimating how far the shells are exploding and…boundless human suffering.
And I haven’t even written about everything yet. Sometimes there’s simply no strength left to get back to this. Only enough to take empty photos of oneself against the background of the sea…
Every time I write these reports and the calls to help, the reports from the Donbass, I am facing a grim, dull emptiness. I simply don’t know HOW to write.
I don’t know WHAT to write.
Every time we arrive at a house, one wants to simply drop the bag with the aid and run. Not go in, not interrupt.
And every time we unpack the aid we listen to everything we are told. We take photos.
Every time I find myself posed, like a doll, against these crumbs of food…”Dunya, come on, we’ve got to”
I pose like a mannequin. And we vanish.
But the people remain…
Vladimir Albinovich Torgonskiy, 67.
On 16 August 2014 he lost his hand after it was struck by shell fragments in Pervomaysk. His wife died a day earlier. 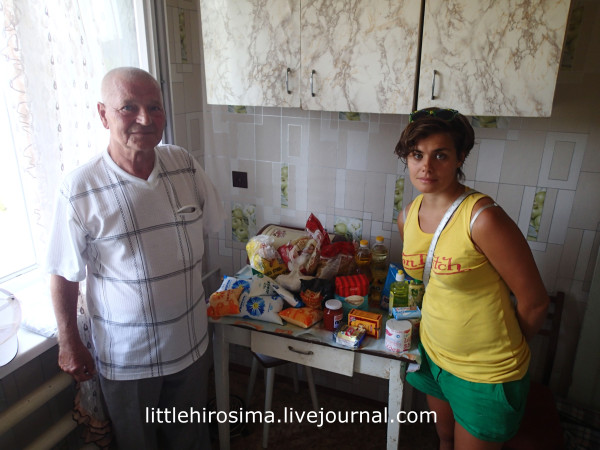 –One second. The fourth shell to strike our house, and the hand is gone.
He told the whole story remarkably calmly, measuredly. He accompanied me to the door, showed all the penetrations.
–That’s the hole from the same fragment.
He was telling, showing… He was telling me all this as if describing a walk to a nearby park with his children, or as if talking about a complete stranger.
Slowly, measuredly, with all the details. He remembers every instant, every second.
When his hand was severed, he walked to the apartment on his own, then went downstairs. There was a fire raging on the second floor.
–I’m telling them “put it out!” I had water in my bathtub but not everyone did.
And he says all this with such calm as if he weren’t human.
His wife died literally a day earlier after suffering from Alzheimer’s for 7 years.
–She would have still been alive…
She was in bed right up to her death, and he could not carry her to the nearest bomb shelter. He was not strong enough to carry her there and back. In addition she required care which was impossible to administer in the basement. So they stayed in their apartment.
He’s a Belarusian, from Mogilev District. But he loves his now-native Pervomaysk and does not want to leave.
–There was a garage, a Moskvich, a wife. Not anymore… But we are brothers…How could this have happened??? Ukrainians, Belarusians, Russians…I’ll forgive everyone everything, just so that the war stops. 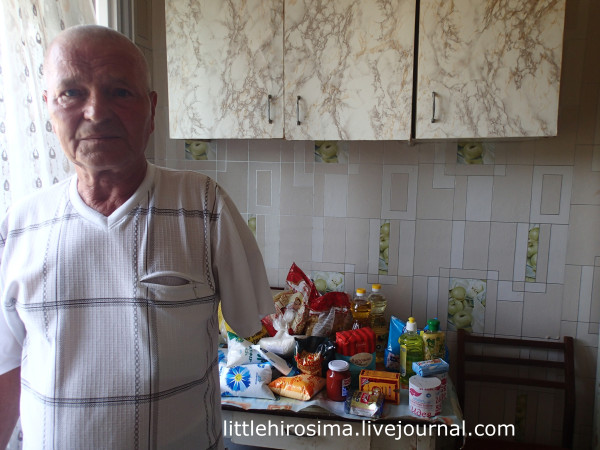 At the time, shells pockmarked Pervomaysk every day. Many people lived in their basements until the infamous Spring ceasefire. One granny told me in a bombshelter “I haven’t been outside in six months.” A day prior to our arrival a shell struck right next to the entrance. I’ll never forget the shell crater or her eyes. Never. It was below freezing, and the guys were plugging the holes with tree branches. They took away the shell. Then the branch was covered with fairy tale-beautiful hoar-frost.  And then you couldn’t see it, the crater. Only the whitened branches…
This summer and spring in Pervomaysk were quite, unlike in Gorlovka and Donetsk. But recently there has been more incoming fire, and there is new destruction. 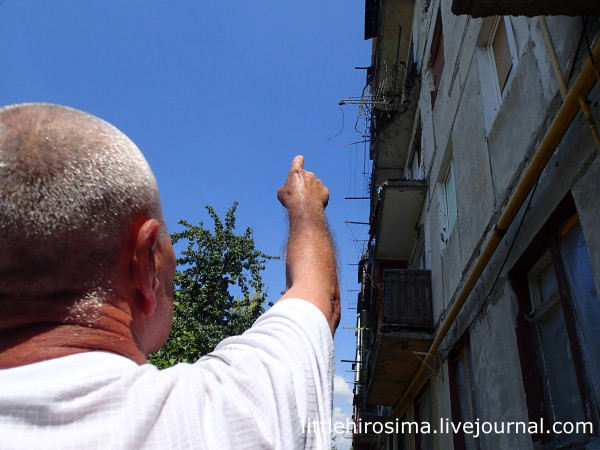 We’re going again soon. If anyone wants to pass on letters for the elderly at the retirement home or anything else, please hurry.