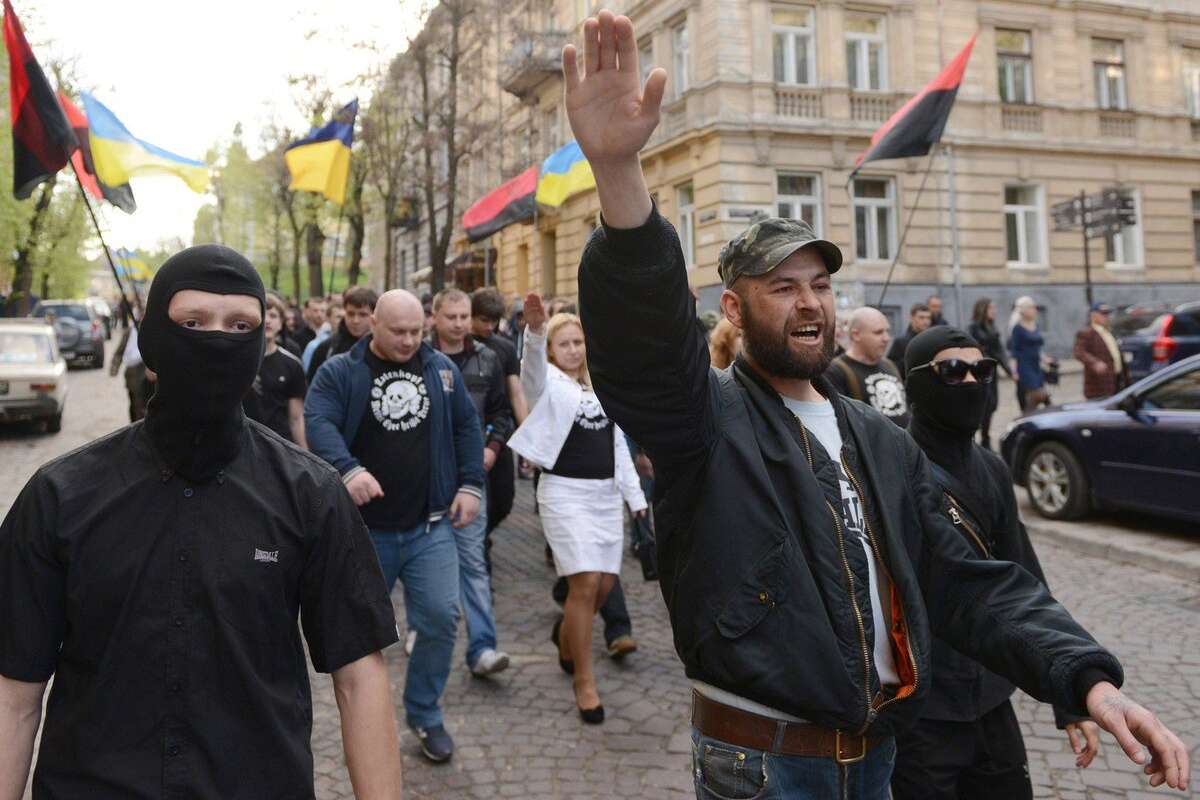 On April 28th, nationalists plan to hold a march of embroidered shirts in Kiev in honor of the SS Galicia division, formed in Lvov in 1943.

The event, which begins at 18:00 at Arsenalnaya Square, Kiev and was announced on Facebook by “Golosiyivska Kryivka”.

“Put on your most beautiful embroidered shirt and come to meet with your family, walk together in a solemn procession in the center of Kiev and remember the First Ukrainian Volunteer Division!”, the organizers wrote.

On the video attached to the poster, one can see excerpts of a black-and-white chronicle with people dressed in Ukrainian national costumes. Swastikas and the SS logo are not featured in the footage, but there is no question that they will be prominently shown at the rally.

Ukrainian member of parliament from Volodymyr Zelensky’s “Servant of the People” Maxim Buzhansky spoke from the rostrum of the Verkhovna Rada on the occasion of the march of nationalists in honor of the SS Galicia division, which will take place today in Kiev.

In his Telegram channel, he wrote that he considers the demonstration to be the glorification of Nazism.

“My bill 2797 prohibiting the glorification of persons who were related to the SS or took part in the Holocaust was recommended by the committee for inclusion in the session’s agenda, in my opinion, the need for its adoption is more than obvious,” the MP concluded.

Another Ukrainian MP, Daniil Getmantsev believes that the march of the SS division’s supporters has nothing to do with patriotism and the struggle for the independence of Ukraine.

“The march in support of the SS division in the city that survived Babi Yar … In this mockery of the graves of the fallen and innocent murdered there is some special, blasphemous, boundless cynicism. And no, this is definitely not about patriotism and the struggle for independence,” he wrote.

According to the People’s Deputy from “European Solidarity” and ex-head of the Institute of National Remembrance Volodymyr Vyatrovich, the SS Galicia division was a German formation, it consisted of Ukrainians who were forced to fight for German interests by force and propaganda.

In his Telegram channel, TV presenter Maxim Nazarov noted that “only Poroshenko’s teachings to Zelensky can be more disgusting than a march of SS fanatics in Kiev.”

Nevertheless, since the time of Euromaidan in Ukraine, this division began to be elevated to a cult. Official propaganda retouched the manifestations of Nazism and claimed that it was a “volunteer Ukrainian division,” which, they say, fought for independence (apparently, within the framework of the Third Reich).

At the same time, when it came to serious discussions, statements began to sound that Ukrainians were forced into “Galicia”, so they cannot be considered collaborators. Such messages were promoted by the head of the Institute of National Remembrance Vladimir Vyatrovich.

The reputation of “Galicia” turned out to be so ambiguous that a Kiev court last year recognized its symbolism as Nazi and forbade the Institute of National Remembrance to tell Ukrainians how “good” it was.

However, further history developed predictably for Ukraine: after direct threats from nationalists, the judges canceled the ban on the appeal. And then, back in September 2020, the Kiev Court of Appeal ruled that the symbols of the SS Galicia division were not Nazi. How that makes sense is a mystery to this day.

In the Lviv region, the cult of “Galicia” has already become official. Moreover, he was supported by the governor Maxim Kozitsky, appointed by Vladimir Zelensky. He recorded a whole video in which he argued that the “Galicians” were collaborators, and stated that it was they who fought so hard against Bolshevism.

It will, sooner or later.

Sadly all will be used at the end, and it all follows ‘the plan’, and the use of the Nazi symbols by the Ukrainians is useful to incite a will for war in the Russian people. So the end will be the nightmare of all nightmares…

I disagree. It will be a swift defeat for Kiev. Like it happened to Georgia. It’s only up to them when they will cross the red line. When they do Ukraine will be Russia again within 2weeks.

It could end really quickly. All they need to do is bomb US and English embassies in Kiev.

What keeps you from taking action, keyboard cowboy? :)

Well, saying, scratching and farting are free. Keep saying it.

I’m glad you agree. Sharing information about occupational parasites is important. We know where they live and their schedule.

I bet they are scared now.

Their emotional state is not my concern.

You are so cruel!

How many did you kill, should we put a bounty on your head?

Adolf Hitler defined them sub-human Slavic, yet Ukrainians still love him, trying to understand these people is useless, a completely time loss.

My theory. Short Version. According to some Historians Noah’s Ark landed somewhere North of Turkey, in the Black Sea. One of the sons of Noah moved West and ended up in Germany/Scandinavia. The so called Caucasians. Last Ice age covered Northern Europe and Scandinavia which is conveniently forgotten. Galicians and brainwashed Ukrainians believe they are leftovers from these “Germans”. Those are the same people who called themselves “Aryans” (which means prideful people). But in all of this they forget the “Sloveni” (people of the Word), Germans are called Nemci, which means mute, because they didn’t speak the word. They just appeared out of thin air 600 AD according to Western “historians” and happen to occupy territory bigger than the size of Pluto. Which obviously doesn’t make any sense. One Indian Sanskrit scholar went to Russia and he thought they speak Sanskrit. Its not a coincidence that Hitler used the Swastika as symbol to fight the “Sloveni” or that they called themselves “Aryan”. The devil inverts (and perverts) because he cannot create himself. It wasn’t just a physical battle but a spiritual one as well. Which should be obvious, spirit always comes before matter.

They are NATO proxies ( useful in the Maidan coup) like Al Qaeda in Libya to kill Gadafi and ISIS in Syria to take oil fields….

Not sure how Ukraine will survive. The Nordstream 2 is almost complete and no revenues for Ukraine and this further downs what is left of its GDP. Millions are getting out of the country and majority of them are going to Russia. What is the population of Ukraine now? 25 million? There were once many Ukrainian prostitutes in Asia also.

What is the difference between the Ukrainian Banderista and Croatian ustasha? NONE! And, yet Russia was supporting ustasha and by extension the West and NATO against the Serbs throughout the Balkan war. So whenever we read posts like this one about the Ukrainian fascists seen from the Russian perspective it is totally misleading because, apparently, for Russia and its apologetics there are at least two kinds of Nazi-fascists: the GOOD ones – those supported by Russia (and its Western “partners”) and the BAD ones – those not supported by Russia. https://translate.google.com/translate?sl=auto&tl=en&u=https://www.vreme.com/cms/view.php?id%3D1731562

from what i read, ustasha is a pro nazi militia and an anti russian orthodox

They murdered the orthodox people in Serbia in a very savage way. Real animals imo.

The Nazi Ustasha men (Wiki tells us ‘the most ardent’) were called ‘the Frankists’ and the Ustashe was founded by the jewish/catholic Dr. Josip Frank, whose father was a ‘Emanuel Frank’. Now the Baron Messia Jakob Frank had also a son ‘Emmanuel Frank’, and when the hype about the Frankist came down, and Eva Frank (even after being visited by the Russian Czar) couldn’t hold it together, they moved to Croatia and into secrecy. You may look it up in Israel owned Geni.com

Most of the Ustashe leaders where jewish, or jewish/catholic converts – and when it was over they all moved via the vatican rat line to the other freemason fascist Juan Peron, into jewish Argentine. Hannah Arendt even wrote a defending piece about the jews in the Ustashe in her booK (Jew) ‘Eichmann in Jerusalem’. Hitler by the way made them (the Frankists in the Ustashe) all ‘Honorary Aryan’… https://www.stormfront.org/forum/t1114393/

And there the circle closes, since the fascist Azov Battalion was also founded and financially supported by Lubavitch Jew Ihor Kolomoyskyi – who also owns the Ukrainian president…

Um, that was Yeltsin who supported Croatian Ustasha in the 90s.

‘What is the difference between the Ukrainian Banderista and Croatian ustasha? NONE!’ Both were/are made by Jews. There always was a strong jewish influence in Russian politics… https://www.nytimes.com/1998/12/16/world/a-communist-accuses-yeltsin-and-jewish-aides-of-genocide.html

“Put on your most beautiful embroidered shirt” …and your make-up and your best high heels (red preferred) and we will all swish our way around the town square playing grab-a**. Браво!

Very bad situation between Kyrgyzstan and Tajikistan. It all started very suddenly, and it’s happening right now. Don’t be surprised if the Ukrops will be encouraged by this. They might try pulling this off in Donbass in the coming months.

Analysts from Central Asia late in 2020 were predicting a sharp aggravation in this region in the Spring. They were sadly correct: