This time they “found” TOS-1 ‘Buratino’ without ever showing any evidence. 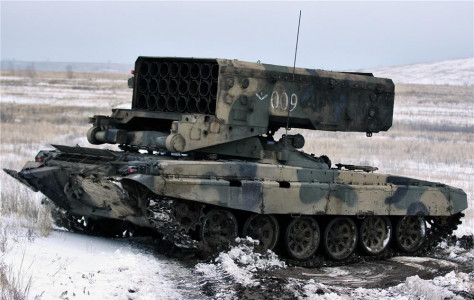 After clearly the conflict in Ukraine was starting to cool down, another wave of groundless accusations started to show up. This time, Reuters reported that the OSCE monitoring missions has spotted a TOS-1 ‘Buratino’, which could only be delivered by Russia, in a training field near the village of Kruhlyk. The edition is citing a phone call with Alexander Hug, deputy chief monitor of the OSCE monitoring mission to Ukraine, in which he never says anything about ‘Buratino’ but rather talks about the pullout of heavy weapons away from the contact line. The story doesn’t end there, Reuters talked with Vladislav Seleznyov, a spokesman for the Ukrainian military, who stated that the so-called ‘separatists’ have used 7 TOS-1 systems, one of which was destroyed by the Ukrainian army.

For everyone who has at least a little bit of knowledge on military knows that TOS-1 ‘Buratino’ is a nightmare for every enemy, and could easily be recognized in action. With a system like this one, most of the Ukrainian army would have been eliminated in just a couple of days, something that we haven’t seen.

At this point, neither the OSCE, nor Kiev is showing any evidence to support this blatant claim. Yet, another piece of the Western propaganda war.