On June 16, the Turkish Army and the Russian Military Police conducted another joint patrol along the M4 highway in southern Idlib. The patrol was held on the part of the highway between the villages of Tarnbah and Furaykah.

An explosion of the improvised explosive device targeted the patrol near the village of al-Qiyasat damaging a BTR-82A of the Russian Military Police.

Idlib militants and their radical supporters regularly stage provocations in an attempt to sabotage the implementation of the Turkish-Russian de-escalation agreement on southern Idlib. If these attacks lead to real casualties or equipment losses, they will easily trigger a new round of the large-scale military escalation in the region. What did I write a few weeks ago, the Americunts are trying to kill Russians and turn Syria into another Afghanistan and so far Putin has had his head up his arse and not challenged the cunts like China and Iran do. The CIA motherfuckers are paying the headchoppers a $100,000 bounty to kill or capture Russians and Iranians, so far the fuckers have failed, but if these cunts are not hit, they will escalate. The Americunts are hated in the region and far more vulnerable, but the Russian military has to be unleashed and the Axis of Resistance armed to the teeth. A few dozen SU-35 and S-400 batteries transferred to Iran will do the trick.

I’m tempted to agree, but maybe Putin thinks this will wear down the warmongers much better in the long-run.

I am not sure as Russians have been killed in both Syria and Libya and the midget has not done a thing. The Americunts only understand strength as they are bullies and thugs. I will give you a recent example, the Iranians sent oil tankers to Venezuela, the fat coward dumbass Trump threatened to stop them, the IRGC which normally stays out of politics, sent a senior general to Qatar with a firm warning, you harm a single Iranian and we will attack the al-Udeid airbase instantly. We all know how fast the Americunts backtracked, and now Iran prepares to challenge US threats by sending more oil to Venezuela.

The real issue is that if the Americunts don’t suffer casualties, the Jew cunts have convinced them that they can turn Syria and Libya into another Afghanistan for Russia circa 1980’s. They are totally wrong this time, but Russia needs to send a concrete tangible signal like a large arms transfer to Iran. BTW, Zarif just flew into Moscow for a quick un announced visit. Let’s hope Putin grows a pair as he is endangering both Russian and Iranian lives.

It brings about the question – where do you draw the red line? Because if an action is seen as crucial to one’s survival, it brings about consequences i.e loss of equipment/life/possibly territory, and no doubt a much larger build up closer to the conflict with a much shorter fuse and even bigger consequences.

I guess the red line depends on what is seen as important for ‘survival’, or what the West presumes to see as important i.e. money, power, influence. Russia is no doubt more concerned about the survival of it’s own territory and people rather than striving for world domination as utmost importance.

That’s why I see it as a longer game, one of convincing the warmongers of the futility of their actions. The importance of these geopolitical matters have to be weighed up carefully, and I’m sure they make mistakes from time to time, but it probably is worth it taking a bit longer if it saves them from sacrificing so much for the minimum outcome.

The West would throw their pawns ‘under the bus’ very easily, whereas Russia considers their soldiers as real family.

I believe we are seeing a total realignment of geo-strategic power and Syria, Libya etc are mere pawns as you saw, but regardless the Americunts are in dying throes and increasingly impotent. That is why it is better to be assertive and send them a clear message, both Russia and China in mistaken belief coddled the bastards too long with going along on Iraq wars, Libya and other aggression, and now both themselves are targets. Iran and DPRK are the only major nations that stood up to the cowards. Russia does not need to go after the cunts directly, just arm the resistance forces and strengthen Iran, Iraq and Syria, who can do the job.

Indeed, Russians are known to be familists with their own and not sacrifice them like the others, Rusvelt sent millions of its own people to die in Nevada and Americans still reffer him as a great leader.

Isn’t a shame that so called ‘allies’ Russia and China that could build a rephinery or two years ago in Venezuela now let Iran to use military means and wrestle alone with the mighty USA in help for the troubled friend? Are they afraid, or fake allies?

Sadly the Majority of the Russian Oligarchy are pro western, Jews and Etnic Turquic…and the enemies of Syria are the West, Israel and Turkey….thats the reason why Putin has not deployed the S-300/400 in Damascus( protected by Russian paratroopers) and Deir Ezzor beside closing the airspace like NATO would do for example in Baltic countries in case of a civil war between Etnic Russians and Latvians in Latgale!….

How do you know the precise sum of 100k in bounty?

These BTR are very tough like most Soviet/Russian weapons, even the older models in Afghanistan fended off even bigger IEDs that the CIA cunts personally placed. They were the workhorse of the Red Army in Afghanistan and even the Northern Alliance had respect for Russian weaponry as these BTR (older 60/80 model)were used in major operations in the Panjshir valley. 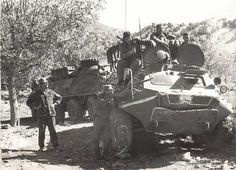 These growing terrorist attacks on Russian forces are bound to increase if there is no retaliation. They are part of US policy of “increasing the cost to Russians” as their special envoy to Syria James Jeffrey openly stated.

The map with the Turkish posts is incorrect, Turkey now has 63 posts in Idlib.

why is there little damage? what are they using as IED’s ? do they want Russia to start bombing again

Russian equipment eh. Runs through an IED blast and you can still tow it

it is began.. how many Russian soldiers want to die to stop these ridiculous patrols?

The irony is more Turkish soldiers died in Idlib than Russians.

Turkey and all the opposition groups Turkey [officially] supports want to reopen the highway, but HTS doesn’t want to reopen the highway at all, so obviously HTS is most likely the group responsible for this attack, ahhh if only it was that simple, it’s not though, with dozens of suspects it just as likely to be the least obvious group that’s actually responsible.
.
If the highway reopens the Turkish backed Syrian Interim Government becomes more powerful, it will be able to trade goods from Latakia all the way to US controlled Ar Raqqah and Al Hasakah.:[
And recently the Kurdish SNC proposed a consolidation between the Turkish Interim Government and the US controlled Autonomous government, which means one merged autonomous government, one that Turkey and the US both recognize and support, one big autonomous government. :[

If HTS [which already controls 70% of Idlib] manages to take over from Turkey they’ll only control northern Idlib and some of Latakia, nowhere else. And no one supports HTS and their Salvation government, they’re an internationally designated terrorist organization with no major superpower backing them up militarily, easy picking for Assad when the time is right.

Why does Russia want to reopen the highway?
The HTS Salvation Government is taking over Idlib and ousting the Turkish backed Interim government in more and more districts every week, and the best way for the Interim government to halt the switch in allegiances [that seems to be escalating] is to reopen the highway.
Reopening the Highway just makes Turkey and it’s Interim Government stronger and weakens HTS, but keeping the highway closed makes HTS stronger and weakens Turkey and the Interim Government.

So who do the Russians want in power, the legitimate Turkish backed Interim Government or the HTS Salvation Government, I know which one it is Assad would prefer to fight, and if he ever wants Idlib back he’ll have to fight one of them, HTS controls 70% of Idlib now and making gains on Turkey, so I’m hoping they take over even more of Idlib, and I think Assad’s hoping that too.
Who could the SAA beat more easily, the Turks and their proxies or HTS, he won’t have to fight both if he plays his cards right, just one of them, but that’s only if Putin lets him.