As the parliamentary Defense Committee revealed, a total number of ships of the British Royal Navy that can be deployed abroad is “woefully low.” 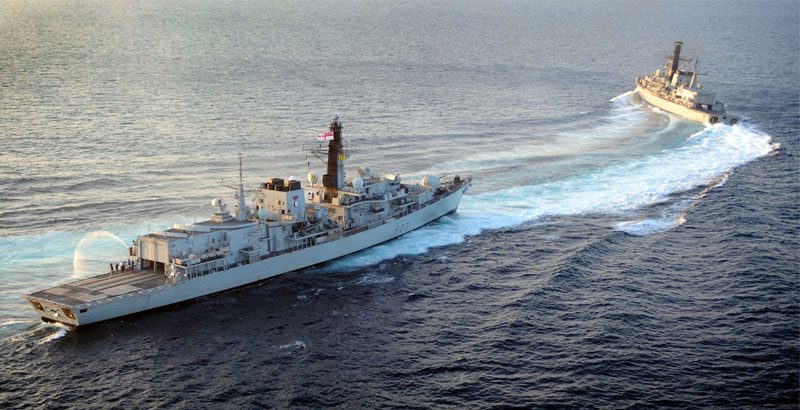 According to the parliamentary Defense Committee, modern vessels that the British Royal Navy should use for replacement of the aging fleet have too many problems with their design and engines, while a “woefully low” number of ships that can be deployed abroad are available for the fleet.

As the latest report of the Defense Committee revealed, the 19 frigates and destroyers, which are currently operated by the Royal Navy fleet, are “way below the critical mass required for the many tasks which could confront it.”

According to the report, all the 13 Type 23 frigates of the Royal Navy will be decommissioned between 2023 and 2035, and it is still unclear which vessels will replace them. The first Type 23 entered in service in 1989, while British Navy received the last one HMS St. Albans in 2002.

It is planned that replacement of the old frigates with the Type 26 Global Combat Ship should be started in 2021. However, MPs have great doubts about this, as the country’s Ministry of Defense has no clear timetable for the replacements.

The Defense Ministry also was criticized for its “extraordinary mistakes” during the design of six modern Type 45 destroyers, the price of each of which is £1 billion (about $1.23 billion). In January, it was announced that the Type 45s will be reequipped due to repeated breakdowns. In 2014, an engine failure made HMS Dauntless to leave its training mission, in 2009, HMS Daring lost propulsion in the middle of the Atlantic, during its first trip to America, the same happened with the ship in Kuwait in 2012.

Later, it became known that the Type 45s was not able to operate in warm waters, such as the Persian Gulf. According to military, Rolls-Royce WR-21 gas turbines of the destroyers would be replaced with diesel generators.

“The United Kingdom will then lack the maritime strength to deal with the threats we face right now, let alone in the future. We are putting the MoD [UK Defense Ministry] on notice that it must not let this happen,” chairman of the Defense Committee, Dr Julian Lewis, concluded.

Although I am not particularly enamored by military equipment I think the above story has deeper meaning and one that Russia should take notice of. It is my contention that we in the west will become increasingly unable to be successful at any complex technological or scientific project. I say this partly because of the way our educational system functions. To be successful an educational system need to let people find out what they are good at and the help develop that talent. However, I think increasingly that is not what is being done. The emphasis now is on producing the ‘right’ sort of people with the ‘right’ attitudes.

The same might have been true in the Soviet Union when it was probably better to be a good communist rather than a good mathematician.

If Russia can avoid the mistake being made in the west and let the natural talent of its people flourish then all will be well. By comparison the west will descend into a confused inter-sectional mishmash of people totally constipated by their own sexual identity.

The United Kingdom are free riders on U.S. military spending. We have 10 Aircraft Carrier groups, they have 0. They spend 2% of their GDP on defense, we spend about 4.5% (the 3.3% is pure fiction).

The European military isn’t much these days http://navaltoday.com/2016/04/06/dutch-navys-largest-ship-out-for-eight-months-due-to-engine-failure/