On Monday night, for almost one and a half hours members of the House of Commons of the United Kingdom intensely questioned the Cabinet, in the person of Britain’s top diplomat Boris Johnson.

The topic of the interrogation was Trump and his “inhuman” (and this is the mildest qualification coming from the lips of the parliamentarians) Decree on the temporary ban on entry into the United States from seven from countries of the Middle East and North Africa.

The problem, according to the opposition Labor Party, as well as some of the Tory legislators and the Liberal Democrats, was that Theresa May’s government has decided on a strategic partnership with the Donald Trump administration, whose policy “is not consistent with the values advocated by the West.”

This issue seems particularly acute given that the US president signed this decree immediately after talks and a joint news conference with the British Prime Minister.

Members of the House of Commons persistently questioned Johnson, trying to find out if Ms. May knew of his intention to issue this decree. If so, why she did not take the opportunity right there, in a face-to-face meeting with her US counterpart, to express a strong protest against the decision? And if not, what does it mean? Does the White House not respect the United Kingdom, a country which it calls a dedicated and special ally?

All the preceding day the Cabinet was subjected to massive pressure from the media and civil society activists insisting the head of the British government strongly condemn the American leader.

Moreover, demands were made to immediately cancel Donald Trump’s visit to the UK as a foreign leader who was “attacking basic human rights” and violating “international humanitarian norms.” According to several members of parliament, a petition was already collecting signatures in many counties demanding that “the extremist president” not be allowed on British soil.

And another problem was also clarified. It turns out that thousands of subjects of the crown hold dual citizenship — the United Kingdom and one of the seven countries from which entry has been temporarily blocked. Don’t forget, we are talking about Iraq, Iran, Libya, Syria, Somalia, Sudan and Yemen.

It took Boris Johnson’s office about 46 hours (after the Prime Minister left Washington) to settle the issue with these people. All British passport holders can enter the United States without restriction, regardless of any passport from a “banned” country.

However, it took a little more than 24 hours, that is, less than a day, for the Canadian government to get the same approval. So the same tricky question comes up: Is it that Trump does not respect the British or that Johnson doesn’t know how to do her job?

The general attitude of the left-liberal opposition was quite decisive — obstruct the new administration in the White House, declare a boycott and condemn the government for cooperating with it.

By the time the Minister of Foreign Affairs appeared before the House of Commons, the cabinet was able to formulate an official position. Trump’s Decree was called discriminatory, divisive and wrong. But this did not negate the fact that the United States, including Trump’s administration, is the main ally of the United Kingdom, a great democratic power upon which global stability and security depend, so that cooperation with “our American friends and allies” will continue, despite disagreements.

But the opposition stepped up its attack, making more and more serious charges and unflattering comparisons.

For example, many members of parliament recalled that the decree was signed on World Holocaust Remembrance Day, and with a straight face said that this was no coincidence. Several Labour members accused Trump of being just as racist as the Nazis were in persecuting the Jews.
Full of righteous anger, a young lady MP spoke out, asking Johnson why he “repeatedly, deliberately demeans the value” of this “symbol”? The Minister of Foreign Affairs immediately retorted: “I think that above all, we should not demean the horrors of the Holocaust” with such comparisons.

Then, they brought in the heavy artillery. One of the oldest members of the House of Commons, Dennis Skinner, stood up. He said, in particular: “I’d like Mr. Minister to imagine for one second what I experienced while hiding under the stairs during the bombing that devastated the towns and villages of Britain, by two fascist dictators, Mussolini and Hitler. Now, this government is walking arm in arm with another fascist — Trump. And what I say is, do the right thing. Don’t allow Trump’s [return] visit to the UK. “This man is not fit to walk in the footsteps of Nelson Mandela.”

Johnson fumbled for words: “I hate to say this, but memory fails venerable gentleman, if he thinks that Mussolini bombed this country. But I have heard. I do not agree with this comparison. I am sure that in our interest to work with our American friends and allies, in particular, to express our concern, when it is needed. But the main thing is to achieve the best deal for the United Kingdom, for its citizens and citizens with dual citizenship.”

A few members of Parliament said that what was happening now in the US reminded them of what was happening in Europe in the 1930s. Boris Johnson held his ground: “I have already expressed my position on the decree of the president of the United States, but I would not compare the elected leader of the world’s greatest democracy with the dark dictators of the past.”
And then it went in circles…

It cannot be said that his own party members entirely failed to support their minister. The MP from Northern Ireland recalled the discriminatory measures introduced at the time against the people of his region, where terrorist activities were carried out by military wing of the IRA. “It’s not for this Parliament to condemn the protection of borders!” the legislator concluded.

Conservatives also reminded their opponents of Barack Obama’s “overt and shameless” interference in the internal affairs of the kingdom before the referendum on secession from the European Union and the outrage it caused. So why, said representatives of the Tories, did this high assembly not mind its own business (amendments to pension legislation were also on the agenda), and let the United States decide how to construct their own migration policies.

Another veteran of Parliament, Joe Churchill, grandson of Winston Churchill, urged not to dramatize the situation and reminded the audience: “In any case, this man [Trump] finally returned my grandfather’s bust to the Oval Office.”

Yet negative sentiment prevailed. The parliamentarians, having quickly gotten answers to all their questions about what would happen to citizens holding dual citizenship, including those who regularly visit the seven “forbidden” countries for humanitarian activities, focused on accusations of “fascism,” “inhumane behavior” and “suppression of human rights. “ The British Government, accordingly, has been accused of connivance and flirting with the “fascist president.”

Of course, Trump’s visit could not be canceled. In any event, the formal invitation was sent to the US President by Her Majesty, not the Cabinet and not the Parliament. Moreover, the ruling party has enough common sense and votes in the House of Commons to prevent adoption of a resolution (even if it were to be recommended) that could undermine the fragile trust that appeared between Donald Trump and Theresa May.
However, the tone of the British Labour Party and the majority of the British media has been condemning. And not only in condemning Trump, but also the Prime Minister and the whole government, for “going arm in arm” with the new American leader.

Of course, it’s not about “fascism” or anxious concern for Britons with dual nationality. The media and legislators of the United Kingdom have demonstrated the new tactics in the fight against the global Fronde with Donald Trump. Anyone who “dares” to do business with him will be accused of collaboration with the reincarnation of Hitler and Mussolini.

I think it’s not just Trump, but also the leader of the French “National Front” Marine Le Pen, the “Alternative for Germany” Party, the Italian “Northern League,” etc.

Behind the “respectable” politicians stands a kind of political and media retreat-blocking detachment. Just try to retreat from liberal globalist positions — you’ll be attacked immediately.

However, as is well known, this retreat-blocking detachment show up when the defense has become quite desperate. 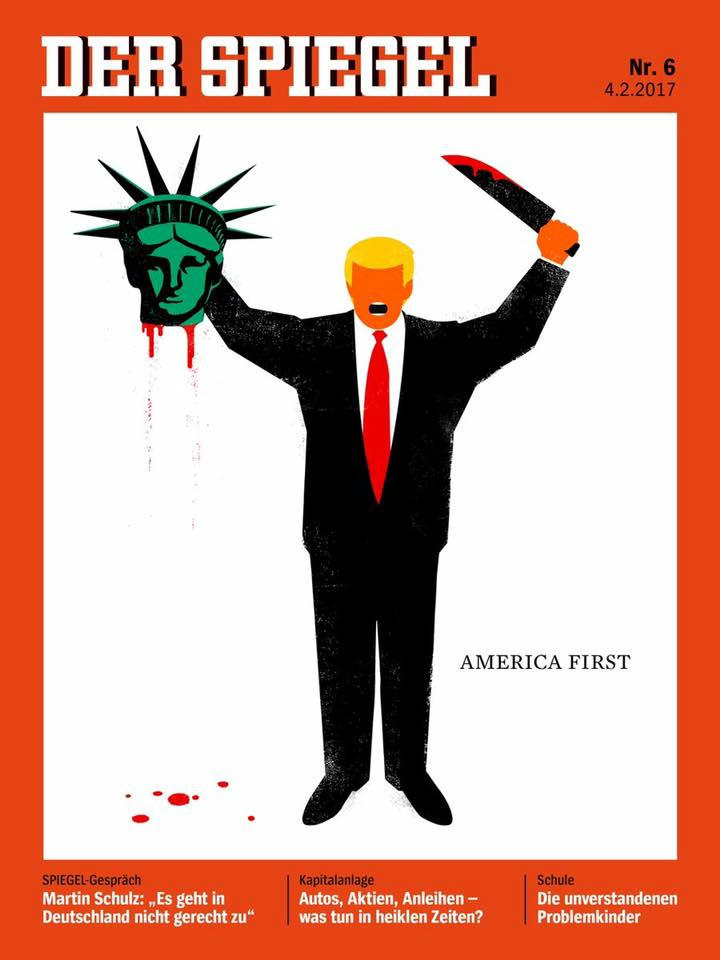 they are pretty good at it, the constant presence of Merkel at the head of the chancellery testifies that.

So what I gather from this article, is that the soros-owned parliament is trying to find an excuse for ousting a PM who doesn’t appear to carry water for soros.